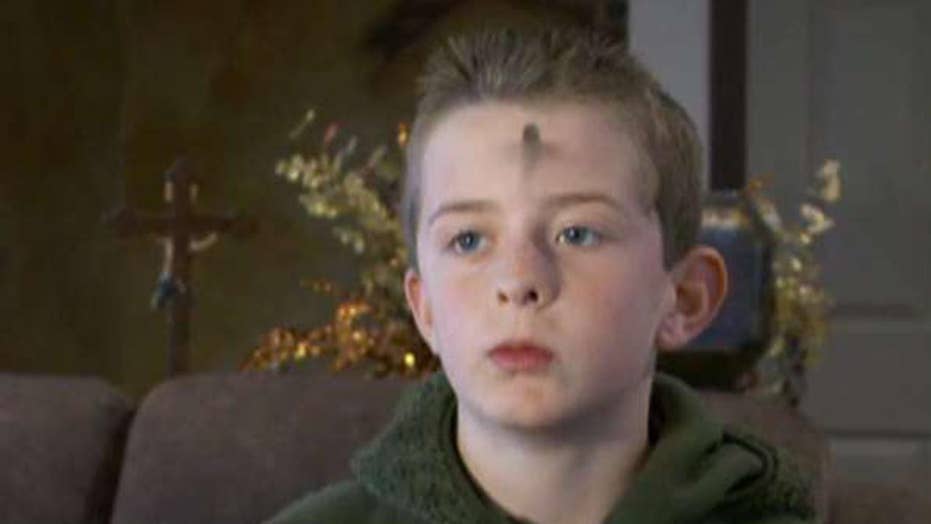 The fourth-grade student from Utah who was told to wipe off the Ash Wednesday cross on his forehead told Fox News he “feels bad” for the teacher who made him do it.

Speaking to Fox News’ Martha MacCallum, William McLeod explained what happened when he showed up to class at Valley View Elementary' with the religious marking on his head.

“I'm Catholic, it’s Ash Wednesday and you put ashes on your head,” William said, explaining what he told his friends who had never seen the religious symbol before. “It’s the first day of Lent.”

William said that when approached by his teacher, he "told her what it was and she said, ‘That’s not appropriate in this school, go wipe it off,’ and she pulled me to the corner and she … made me wipe it off.”

William said he tried to explain the mark twice, but each time the teacher told him the ashes had to go.

“She told me two times to wipe it off in front of my friends in the corner and I wiped it off and she said, 'More,' until it was like gone.”

MILLENNIALS CREATE A BIBLE FOR THE INSTAGRAM GENERATION: 'WE…ARE USING IMAGERY IN A MUCH MORE MODERN WAY'

William continued, “When I went in the office I was crying, because I felt like I was in trouble.”

William’s grandmother, Karen Fisher, told Fox News that she was “plenty angry” when she received a call from the principal, who described what happened as a “situation.”

“The teacher had called me later and I told her I wasn’t happy and she asked me, ‘What can I do?’ And I said, 'Nothing.'" Fisher said. “I’ve raised four boys here and this has never happened, so I didn’t know what to do — whether I should call my priest or what.”

The teacher has since apologized and when asked if he accepted her apology, William said, “Yeah, I kinda feel bad.”

The school has placed the teacher on administrative leave, Fox News reported.