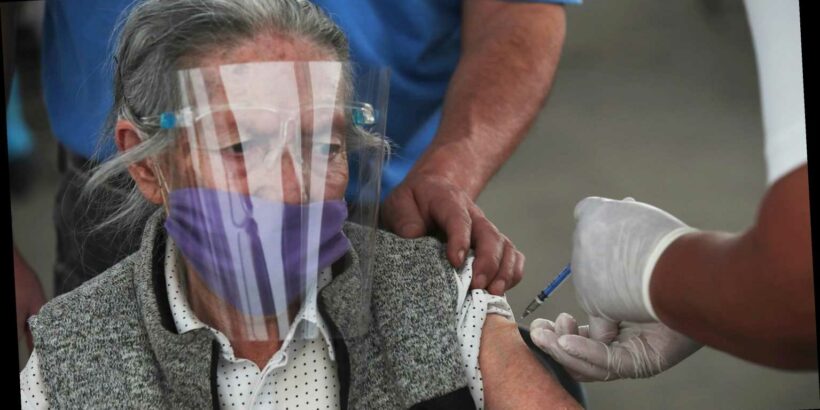 EL PASO, Texas – A Canadian cargo jet landed in Mexico City on Tuesday, taxied to a stop and met the sort of fanfare typically afforded to heads of state, with government officials and a gaggle of press awaiting its arrival.

Aboard the plane: refrigerated steel containers filled with 852,150 doses of Pfizer’s COVID-19 vaccine.

“It’s the most vaccines we’ve received in any week,” Marcelo Ebrard, Mexico’s secretary of foreign relations, posted on Twitter, followed by a 32-minute video of the shipment’s landing. “We keep going.”

A year into a pandemic that forced a partial closure of the U.S.-Mexico border, Mexico’s ability to vaccinate its citizens stands as a critical issue in the bilateral relationship, underpinning discussions over an eventual reopening of the border.

Mexico has been slow to secure and distribute vaccines, administering 2.6 million doses in the country of 117 million citizens.

This week, the U.S. topped 80 million administered doses, according to data from the Centers for Disease Control and Prevention.

Tracking COVID-19 vaccine distribution by state: How many people have been vaccinated in the US?

An elderly woman gets her Sinovac Biotech COVID-19 vaccine at the Americas sports center in Ecatepec, a borough on the outskirts of Mexico City, Tuesday, Feb. 23, 2021. (Foto AP/Marco Ugarte (Photo: Marco Ugarte, AP)

The imbalance between neighbors is felt acutely at the El Paso-Juárez border, where health authorities in El Paso County, Texas, have vaccinated more than 138,000 people with a first dose and 84,000more with two doses, while federal authorities in Juárez have vaccinated numerous health care workers but not the public at large.

The metropolitan area includes nearly 840,000 people in El Paso County and 1.4 million people in Juárez, according to U.S. and Mexico census figures.

After health care workers, Mexico’s national vaccine strategy is focused on rural seniors and it’s unclear when the vaccine will arrive for the public in Juárez. The nation’s defense ministry, tasked with distributing the vaccine, didn’t respond to requests for the exact number of doses administered in Juárez, and Chihuahua state health authorities declined to say.

Coronavirus Watch newsletter: Sign up for daily updates right in your inbox

US focuses on getting ‘every American’ vaccinated

Before their virtual meeting on Monday, President Andrés Manuel López Obrador told reporters he planned to ask President Joe Biden to share the country’s vaccine stash with its southern neighbor.

The White House quickly swept that idea off the table.

“The administration’s focus is on ensuring that every American is vaccinated, and once we accomplish that objective we’re happy to discuss further steps beyond that,” White House spokeswoman Jen Psaki said during a Monday press briefing ahead of the bilateral meeting.

“Juárez is still struggling with the vaccine.”

Later, in a readout of the call, the White House said the two leaders “agreed to deepen cooperation on pandemic response, including by enhancing public health capabilities, information sharing and the development of border policies.”

In the borderland, where communities on either side of the international line are inextricably linked, Mexico’s vaccine program is nearly as important to public health on the U.S. side as the homegrown one, experts say.

“Juárez is still struggling with the vaccine,” said Ricardo Samaniego, El Paso County Judge. “We’re not going to solve it until we realize that Chihuahua is going to have a real difficult time.”

Five states are rolling back mask mandates: More could be on the way. Here’s what it could mean for all of us.

An employee of the Instituto Mexicano del Seguro Social (IMSS) health clinic #70 in the outskirts of Ciudad Juárez keeps guard at the entrance. The health clinic is one of the public health clinics designated to provide health care for COVID-19 infections in the border city. (Photo: Omar Ornelas/ USA Today Network)

Mexico has vaccinated most of its health care workforce. The next priority group is adults over age 60. But López Obrador’s national vaccine strategy — focused on distribution to marginalized, rural communities — has so far left Mexican border cities in the lurch, even though they have been especially hard-hit by the pandemic.

“How is vaccination going? It’s been complicated,” Dr. Mirna Beltran, undersecretary for preventative medicine with the Chihuahua state health authority, said in a news conference last week. “We’re starting in places that are hard for our health care workers to reach.

“We still don’t know when the vaccine will reach Juárez,” she said. “Remember that these vaccines depend on global production. We hope that in the coming weeks it arrives in Juárez.”

Mexico is distributing five vaccines, including Pfizer’s, the AstraZeneca vaccine, a Russian version and two Chinese formulas. In an effort to gain more control over its program, Mexico is standing up a factory to produce China’s CanSinoBio vaccine, and the first vials are supposed to come available by the end of March, Ebrard reported on Tuesday.

A health worker prepares a dose of the Sinovac Biotech COVID-19 vaccine to be administered at the Americas sports center in Ecatepec, a borough on the outskirts of Mexico City, Tuesday, Feb. 23, 2021. (Foto AP/Marco Ugarte (Photo: Marco Ugarte, AP)

The U.S. hasn’t engaged much in “vaccine science diplomacy,” as has occurred in previous pandemics when rich countries would extend their influence through vaccination campaigns, according a report on global vaccine distribution produced by the Council on Foreign Relations.

The wealthiest nations are instead rushing to secure supplies for themselves: The World Bank reports that 82% of nations administering vaccines fall into the high-income or upper-middle-income category. Countries below the middle-income level could go without widespread access until 2022 or 2023.

The U.S. implemented restrictions on non-essential travel at land ports of entry in March last year. Effectively, U.S. citizens, legal permanent residents and those with work or student visas could continue to cross while Mexican nationals with tourist cards could not.

A woman sits outside a COVID-19 triage at the Instituto Mexicano del Seguro Social (IMSS) health clinic #70 in the outskirts of Ciudad Juárez. The health clinic is one of the public health clinics designated to provide health for COVID-19 infections in the border city. (Photo: Omar Ornelas/ USA Today Network)

Thousands of U.S. citizens live on the Mexican side of the border. Even with restrictions on non-essential travel at ports of entry border-wide, hundreds of thousands of people crisscross for work, school and family obligations.

“The priority is ensuring that as many vaccines get into the arms of Americans as possible and then broadening that to help other countries,” said U.S. Rep. Veronica Escobar (D-El Paso). “My priority is to make sure we have a plan and have resources for border communities. We’re not going to be able to safely open (the border) until we have that plan in place.”

Escobar was expected to submit a bill Thursday called the “Binational Health Strategies Act” that, among other things, asks the Biden administration to engage Mexico on public health and requests that a COVID-19 vaccine “be disbursed throughout the United States-Mexico Border Area, taking into account the various vulnerable populations in the region.”

In El Paso and Juárez, authorities confronted the pandemic at its start with restrictions on daily life that mirrored one another — but that fell apart as state and national politics forked in different directions.

Chihuahua state has been slowly reopening businesses as infections decrease, recently permitting restaurants and bars to stay open past midnight. But the state continues to enforce strict capacity restrictions, 60% at restaurants and 30% at bars.

On Tuesday, Texas Gov. Greg Abbott announced he would lift a statewide mask mandate on March 10 and said businesses could reopen 100%.

“We always talk ‘region, region, region,'” said Samaniego. “If ever we are supposed to look at Chihuahua, El Paso and Las Cruces, as a single region, it’s right now.”

A ‘gobsmacking’ number of students in need aren’t applying to college: Are we missing ‘an entire generation’?

Three vaccines, increased manufacturing: How US will have enough COVID-19 vaccine for every US adult in May – or even sooner