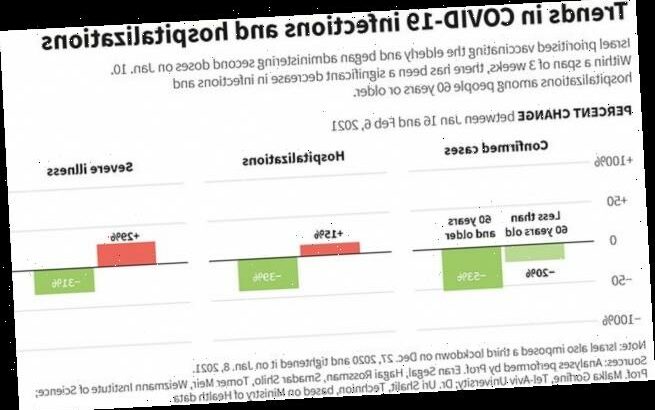 Israel offers a peek into the post-vaccine world: COVID cases, hospitalizations and deaths among older people fell by more than 30% three weeks after they got their second doses – and the shot IS working against the UK variant

Israel´s swift vaccination rollout has made it the largest real-world study of Pfizer Inc’s COVID-19 vaccine. Results are trickling in, and they are promising.

More than half of eligible Israelis – about 3.5 million people – have now been fully or partially vaccinated. Older and at-risk groups, the first to be inoculated, are seeing a dramatic drop in illnesses.

Among the first fully-vaccinated group there was a 53% reduction in new cases, a 39% decline in hospitalizations and a 31% drop in severe illnesses from mid-January until February 6, said Eran Segal, data scientist at the Weizmann Institute of Science in Rehovot, Israel. 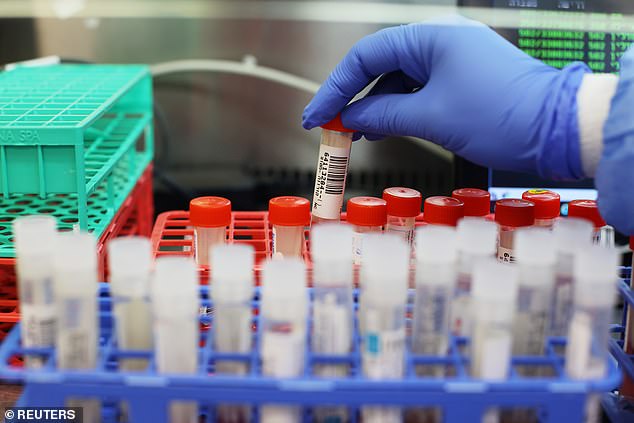 In the same period, among people under age 60 who became eligible for shots later, new cases dropped 20% but hospitalizations and severe illness rose 15% and 29%, respectively.

Reuters interviewed leading scientists in Israel and abroad, Israeli health officials, hospital heads and two of the country’s largest healthcare providers about what new data shows from the world’s most efficient vaccine rollout.

The vaccine drive has provided a database offering insights into how effective the vaccines are outside of controlled clinical trials, and at what point countries might attain sought-after but elusive herd immunity.

More will be known in two weeks, as teams analyze vaccine effectiveness in younger groups of Israelis, as well as targeted populations such as people with diabetes, cancer and pregnant women, among a patient base at least 10 times larger than those in clinical studies. 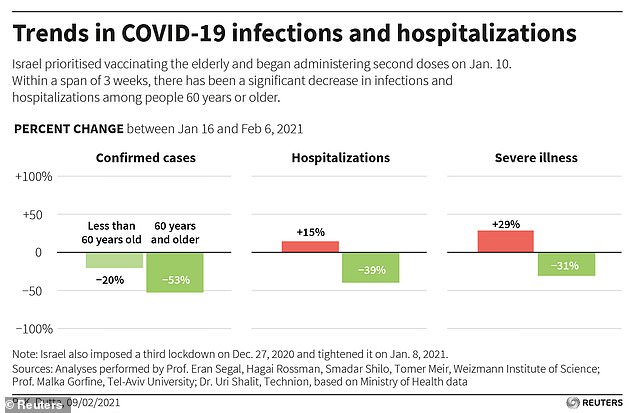 The charts show there was a big reduction in the number of new cases, hospitalizations and severe illness in the population once they had completed the second dose of the vaccine 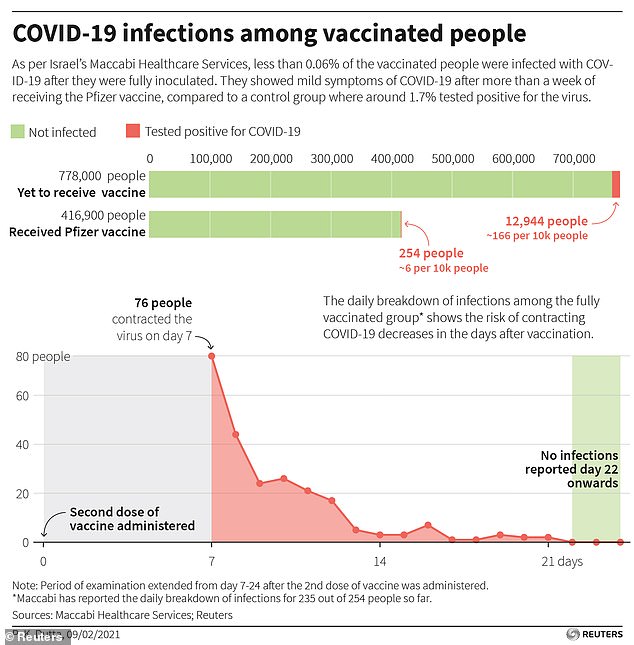 Less than 0.06% of those vaccinated were infected with COVID after receiving the injection . Some had mild symptoms after a week of taking the jab but after three weeks there were no new infections 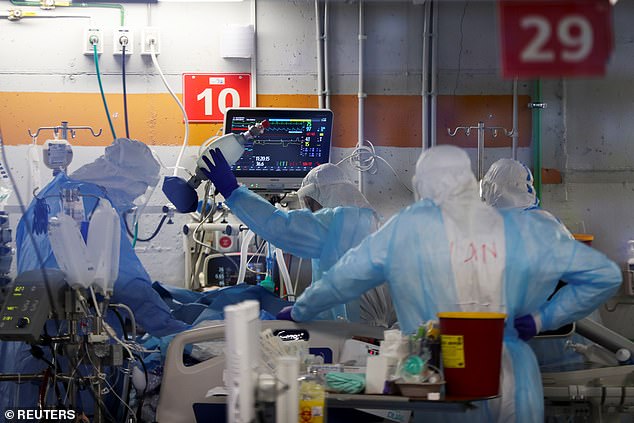 Medical workers, seen through a window of an observation room, wear personal protective equipment as they work inside an underground ward treating patients with the coronavirus dat Sheba Medical Center in Ramat Gan, Israel 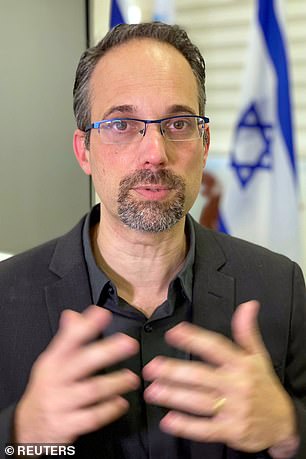 ‘We do expect further decline in the overall cases and in the cases of severe morbidity,’ said Ran Balicer, pictured, chief innovation officer of HMO Clalit

‘We need to have enough variety of people in that subgroup and enough follow-up time so you can make the right conclusions, and we are getting to that point,’ said Ran Balicer, chief innovation officer of HMO Clalit, which covers more than half the Israeli population.

Pfizer is monitoring the Israeli rollout on a weekly basis for insights that can be used around the world.

As a small country with universal healthcare, advanced data capabilities and the promise of a swift rollout, Israel provided Pfizer with a unique opportunity to study the real-world impact of the vaccine developed with Germany’s BioNTech

But the company said it remained ‘difficult to forecast the precise time when herd protection may start to manifest’ because of many variables at play, including social distancing measures and the number of new infections generated by each case, known as the reproduction rate.

Even Israel, in the vanguard of the global vaccine drive, has lowered expectations of emerging quickly from the pandemic because of soaring cases.

A third national lockdown has struggled to contain transmission, attributed to the fast-spreading UK variant of the virus. On a positive note, the Pfizer/BioNTech shot appears to be effective against it.

‘We’ve so far identified the same 90% to 95% efficacy against the British strain,’ said Hezi Levi, director-general of the Israeli Health Ministry. 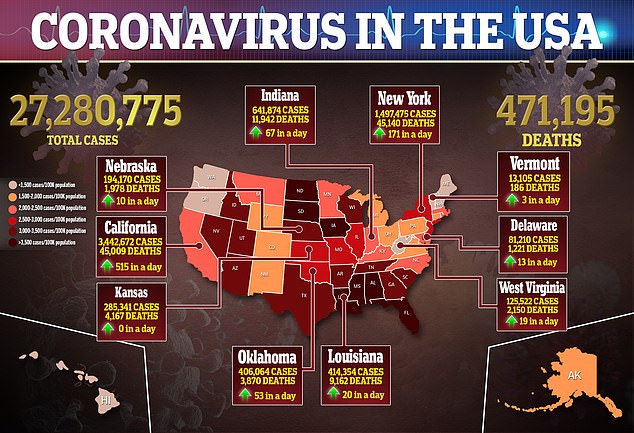 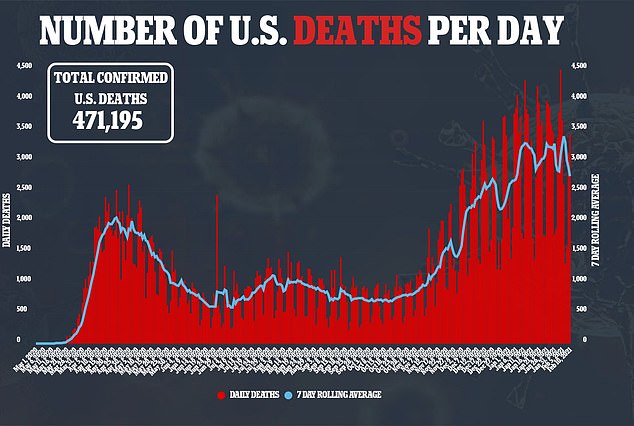 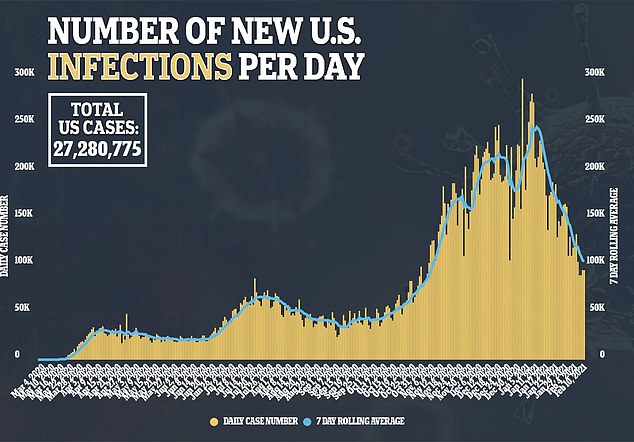 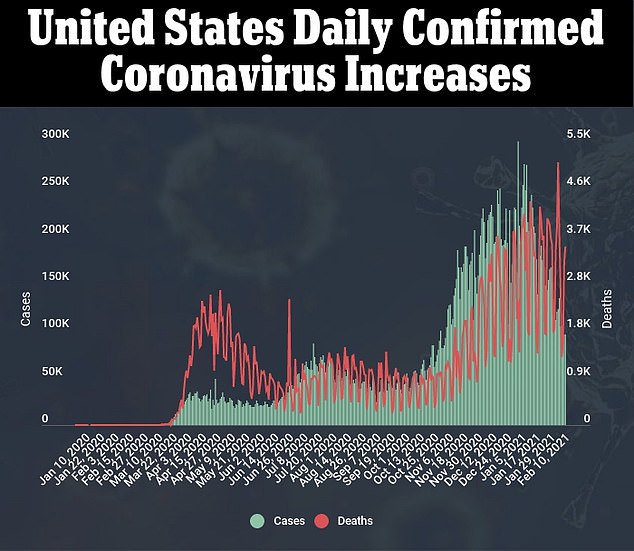 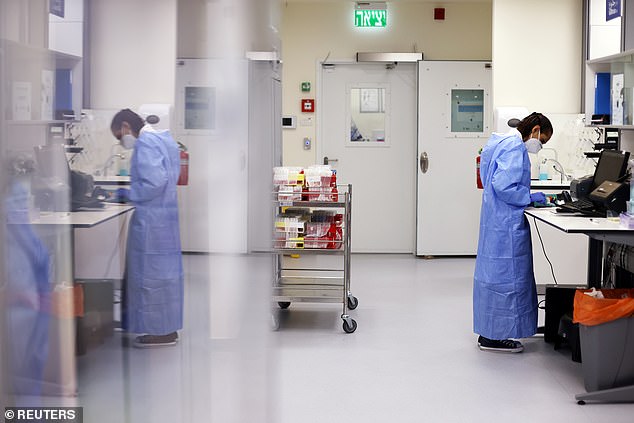 ‘It is still early though, because we have only now finished the first week after the second dose,’ he said, adding: ‘It’s too early to say anything about the South African variant.’

Israel began its vaccination program December 19 – the day after Hanukkah – after paying a premium for supplies of the Pfizer/BioNTech vaccine.

Four days later, the more contagious UK variant was detected in four people. While the vaccine is preventing illness in older people, the variant now makes up about 80% of new cases.

Finding themselves in a race between the vaccine and the new variant, Israel began giving shots to those over 60 and gradually opened the program to the rest of the population. 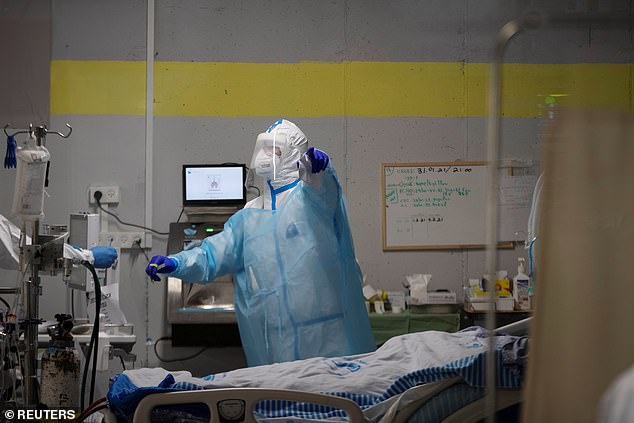 A medical worker, seen through a window of an observation room, wears personal protective equipment as he works inside an underground ward treating patients 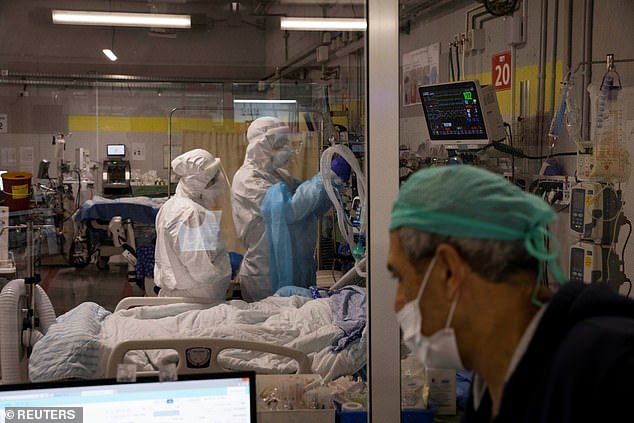 Every detail was digitally tracked, down to in which arm the patient was jabbed and what vial it came from.

One week after receiving the second Pfizer dose – the point at which full protection is expected to kick in – 254 out of 416,900 people were infected, according to Maccabi, a leading Israeli healthcare provider.

Comparing this against an unvaccinated group revealed a vaccine efficacy of 91%, Maccabi said.

By 22 days after full vaccination, no infections were recorded.

Israeli experts are confident the vaccines rather than lockdown measures brought the numbers down, based on studying different cities, age groups and pre-vaccine lockdowns. 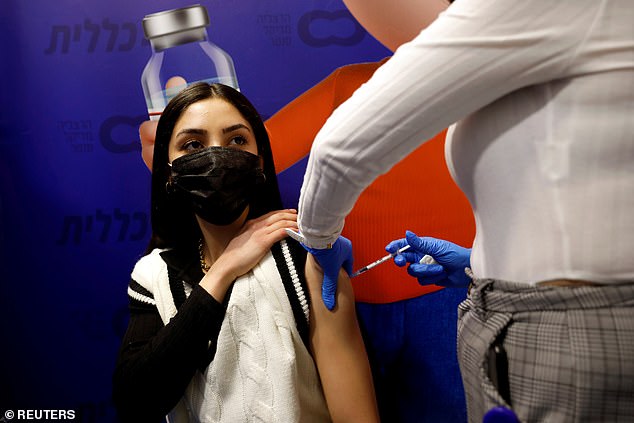 A woman receives a vaccination against the coronavirus disease at a temporary Clalit healthcare maintenance organization centre, in Herzliya, Israel

The comparisons were ‘convincing in telling us this is the effect of the vaccination,’ said Weizmann Institute’s Segal.

With 80% of senior citizens partially or fully vaccinated, a more complete picture will begin to emerge as soon as this week.

‘And we do expect further decline in the overall cases and in the cases of severe morbidity,’ said Balicer, of HMO Clalit.

At Israel’s biggest COVID-19 testing centre, run by MyHeritage, researchers have tracked a significant decrease in the amount of virus infected people carry, known as cT value, among the most-vaccinated age groups.

This suggests that even if vaccinated people get infected, they are less likely to infect others, said MyHeritage Chief Science Officer Yaniv Erlich.

‘The data so far is probably most clear from Israel. I do believe that these vaccines will reduce onward transmission,’ said Stefan Baral, from Johns Hopkins School of Public Health in Maryland.

It is unclear whether Israel will be able to keep up its world-leading vaccination pace. 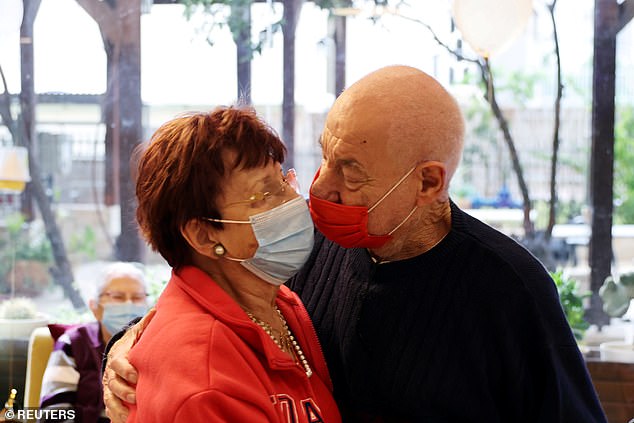 Residents of an assisted living facility dance after receiving their booster shots of the vaccination against the coronavirus disease in Netanya, Israel in January

‘When you vaccinate fast and a lot, you eventually get to the hardcore – those who are less willing or harder to reach,’ said Boaz Lev, head of the Health Ministry’s advisory panel.

The vaccination pace is seen even more crucial with the British variant’s rapid transmission.

‘In the race between the UK variant spreading and the vaccinations, the end result is that we are seeing a kind of plateau in terms of the severely ill,’ said Segal.

The big question is whether vaccines can eradicate the pandemic.

‘The virus is not going anywhere,’ she concluded. 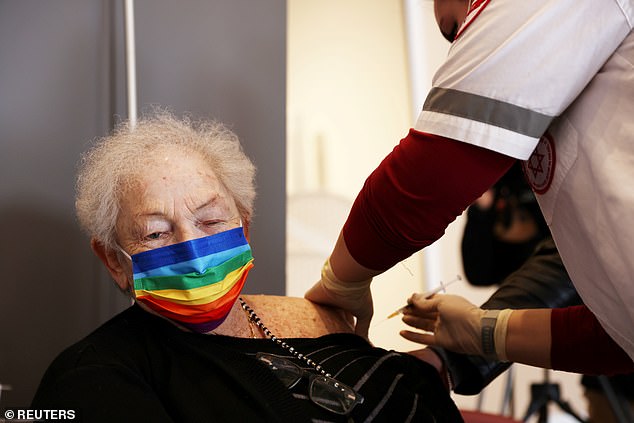