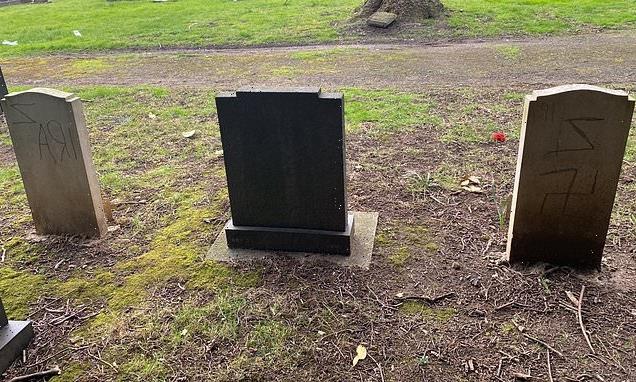 Soldiers’ graves have been daubed with the Russian Z symbol by vandals this week, prompting outry from the community.

The headstones at Ripon Cemetery were also scrawled with ‘IRA’ and the Nazi swastika sign on Tuesday.

Ripon, North Yorkshire, is a military town that houses the 21 Engineer Regiment and was victim to an IRA bombing in 1974.

Leader of Ripon City Council, Andrew Williams, said: ‘This isn’t what I view as antisocial behaviour.

‘It is the desecration of war graves.’ 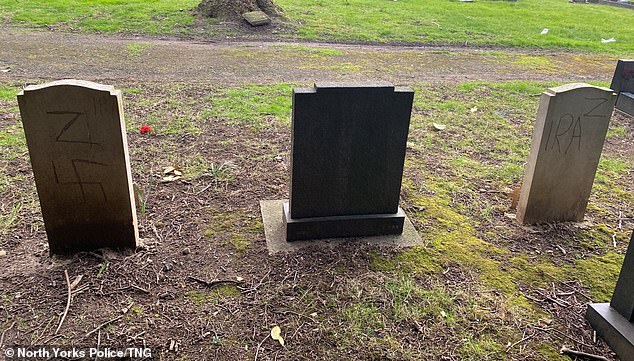 Graves, thought to belong to soldiers from World War Two, have been ‘desecrated’ with the Russian Z symbol 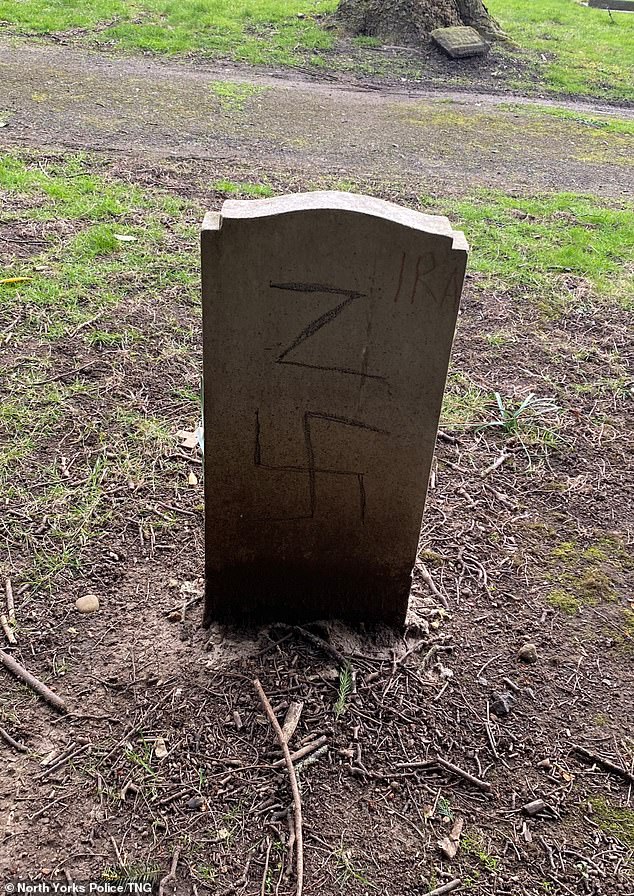 ‘IRA’ and the Nazi swastika signs have also been scrawled across the stones in Ripon Cemetery, in North Yorkshire

He added: ‘Residents are appalled, shocked and disgusted.

‘Obviously we are appalled, not least because Clara barracks was bombed by the IRA. It is abhorrent. Just abhorrent.’

The graves are believed to belong to soldiers from World War Two.

Inspector Alex Langley from the Ripon Neighbourhood Policing Team said: ‘Members of the public are quite rightly shocked by these instances of vandalism.’

Pauline McHardy, a councillor for Ripon, went to the cemetery as soon as she heard the news.

She said: ‘What the hell are they doing going into the cemetery? It’s just so disrespectful.

‘I just think it is absolutely disgusting.’

Councillor McHardy believes that the root of the acts lie with police inaction and they could have been prevented.

She said: ‘Vandalism and unsocial behaviour is just getting out of hand.

‘I know I am speaking for Ripon when I say it is getting out of all proportion and something really needs to be done.

‘I know the ones that are there are doing their best but if the manpower isn’t there you cannot serve the public appropriately when there are problems.

‘The police commissioner needs to be doing something now. Not words. We don’t want words. We want action.’

Councilor Williams agreed with this, saying: ‘If people thought there was a greater risk of being caught they would have been less likely to do this in the first place.

‘It seems they have been reluctant to get a grip of the problem for some time.’

Another, said that it was ‘beyond vandalism’ and that the local police force needed to be stepped up to prevent similar acts in the future

Residents were horrified and angered by the incident.

‘The persons responsible should be made to clean every headstone in the graveyard first, then dealt with severely. With a real punishment.’

Stan Darbyshire, an ex-Royal Engineer, added: ‘Absolute morons. This is a massive insult to a city and its people who have a huge military history.’

Resident Joy Hunt said it was absolutely disgusting, and they were ‘appalled’.

‘This goes way beyond vandalism,’ she said. ‘Ripon really needs to step up policing to prevent further acts of desecration taking place.’

Many soldiers based there had been serving in Northern Ireland at the time and only the NAAFI shop manageress, 49, was injured suffering facial cuts from flying glass.

Two stores and the main NAAFI building were damaged, but another bomb was later destroyed in a controlled explosion in the main barracks, where 100 soldiers had been sleeping.

It came just two months after 12 were killed, including several young children, on a coach taking servicemen and their families from Manchester to Catterick Garrison and RAF Leeming.

A former Parachute Regiment Cook, McMullen was sentenced to 14 years in 1996 but was later freed because of the time spent fighting extradition from the US and his renunciation of the IRA.

At York Crown Court, Judge Arthur Myerson said: ‘This was a bad case. It was carefully planned by you and it was daringly executed.’

Ripon, North Yorkshire, is a military town that houses the 21 Engineer Regiment and was victim to an IRA bombing in 1974. Above, the entrance to the cemetery

What does the Z on Russian tanks mean? 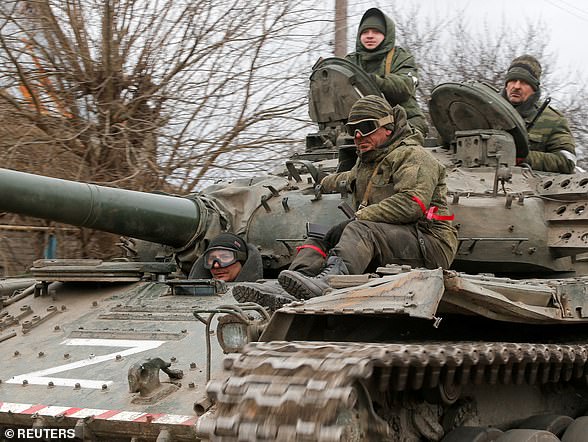 The letter Z has become a propaganda symbol by Putin’s supporters in Russia after appearing on Russian vehicles invading Ukraine.

The invading Russians use the symbol to quickly identify if a vehicle is friend or foe.

However there is confusion over what the symbol, which has been compared to Nazi Germany’s swastika, actually means.

The letter Z does not exist in the Cyrillic Russian alphabet.

It has been interpreted as standing for ‘Za pobedy’ (for victory), others for ‘Zapad’ (West).

West is in reference to Russia western forces.

The ‘Z’ symbol had been seen inside squares and triangles as well as on its own – each thought to denote forces from a specific part of the military.

The symbol only appeared very recently, so the Ukranian forces couldn’t copy it beforehand.