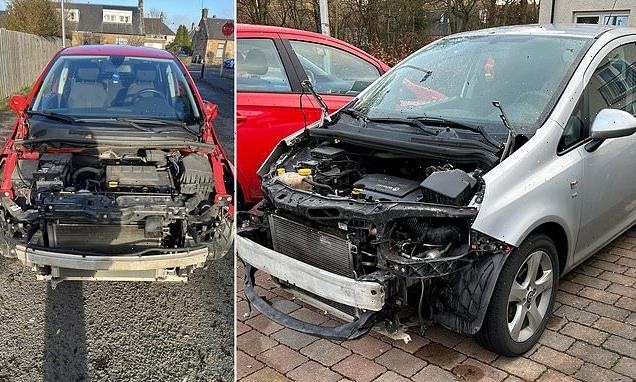 Beware the Corsa Cannibals: Vauxhall owners are warned after thieves strip saloons of their parts while they were parked outside their owners’ homes overnight

Vauxhall owners have been warned after thieves cannibalised people’s Corsa’s in the middle of the night while their owner’s slept at home.

Distraught owners woke up to find their saloons ripped apart by the crafty criminals, with one Scottish mother discovering the entire front of her car had been removed.

Hayley Grady, 38, says she now feels ‘unsafe’ in her home in Ratho, Edinburgh, after the thieves struck in the early hours of Friday morning.

Her husband Andrew, also 38, woke up at 6.45am today to find both their Vauxhall Corsa D had had its windows smashed and been stripped for parts, leaving Hayley unable to get to work. 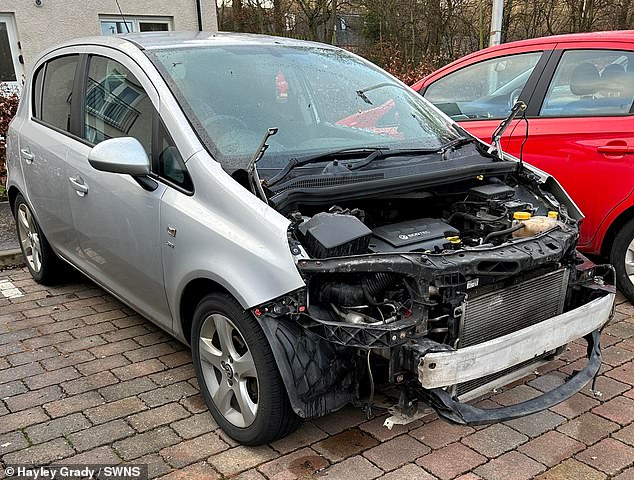 Hayley Grady, from Ratho, Edinburgh, woke up to find the front of her Vauxhall Corsa had been removed by thieves this morning 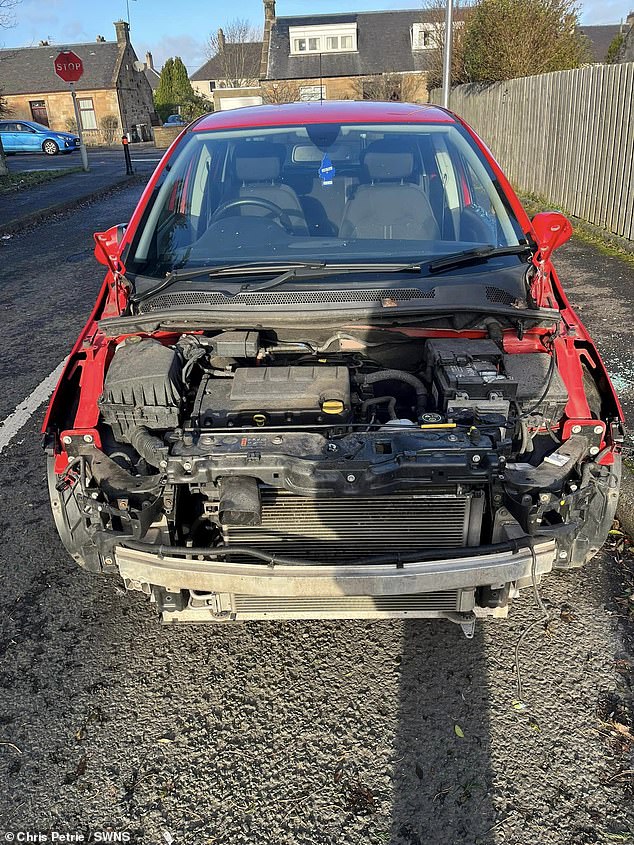 Christ Petrie, from Loanhead, Midlothian, also found his car had been targeted when he got up on Friday morning

Devastated Hayley, who works in production for a clothing company, uses the car to take her eldest son who has Crohn’s disease to the hospital.

She blasted the cruel Corsa Cannibals for destroying it and said she has no way to get to work now.

Hayley said: ‘We went to bed about midnight, my husband got up this morning to go to work at about 6.45am, the total front end of the car’s totally gone.

‘None of the neighbours, nobody heard anything. It’s making me feel ill they were so close to the houses, it makes me feel unsafe.

‘Our eldest son has Crohn’s disease, we need the car to get to hospital.

‘It’s making us so angry to think somebody could just come and do that, they don’t care what impact they have on people’s lives.

‘I want to let people know because we are a small village, it’s really quiet in the evenings.

‘Who’s to say they aren’t going to come back? This criminal-minded person obviously doesn’t care.

‘It’s only just going to keep happening. They’re probably laughing because they know they are getting away with it. I think 100 percent it’s Corsa Cannibals.

‘The police seriously need to get more resources put into this one as these criminals are clearly running rings around them.’ 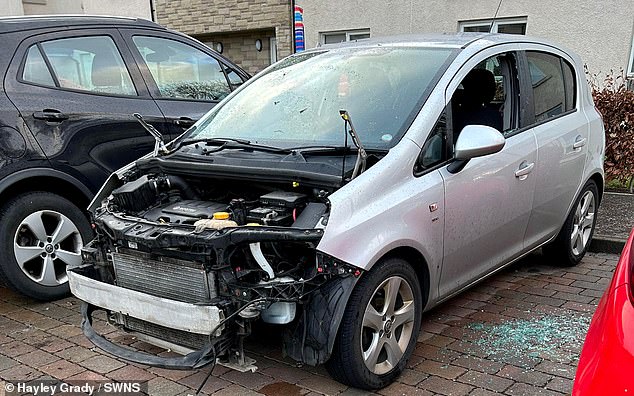 Mrs Grady said she was unable to get to work due to the damage, which involved the front bumper and bonnet lid being removed 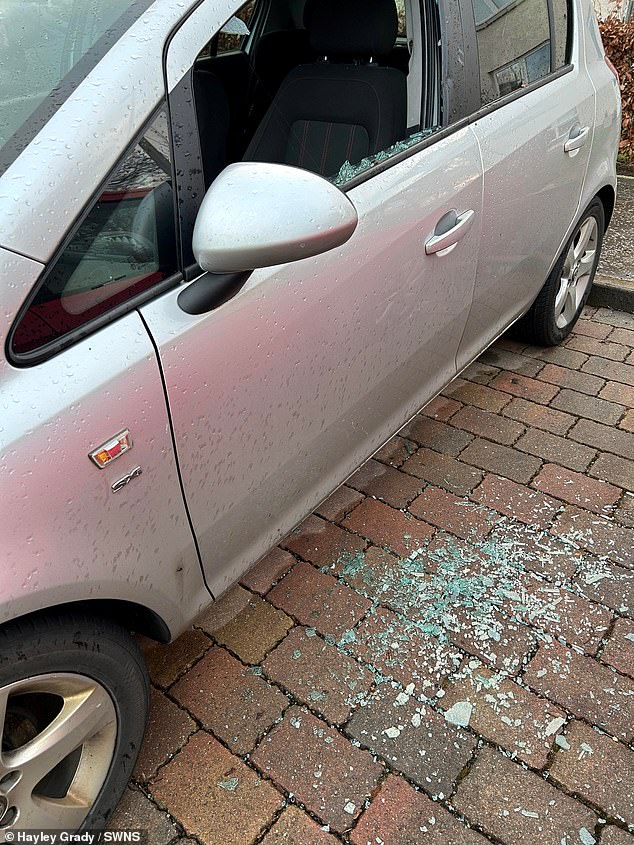 The criminals also smashed the windows of the car, presumably to gain access to the inside 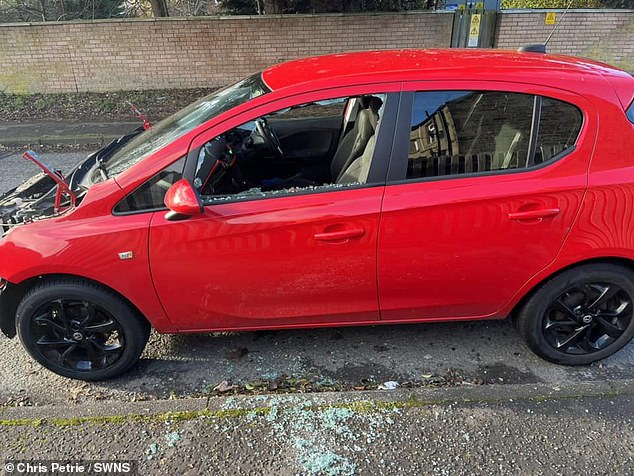 Transport worker Chris said the car was parked 30 seconds from his house but he woke up to find the front windows smashed and the whole front taken apart.

He said: ‘They are obviously very quiet as none of my neighbours, or dogs, heard anything and they knew exactly what they were doing.

‘I think it’s these Corsa Cannibals. Whoever has done it know what they are doing.

‘The dismantle the whole front which is no easy task and it’s been done meticulously, all unscrewed as they were left lying on the road.

‘They took my front plates to so don’t know what they are doing with them.’

A Police Scotland spokesperson said: ‘Police are investigating the theft of car parts from two vehicles in Ratho, Edinburgh and Loanhead, Midlothian.

‘The first incident was reported to police around 7.10 am on Friday, 6 January 2023, and happened in Wilkie View, Ratho, Edinburgh.

‘The second incident took place in Park Crescent, Loanhead recently and was reported this morning.

‘Enquiries into both thefts are at a very early stage.’