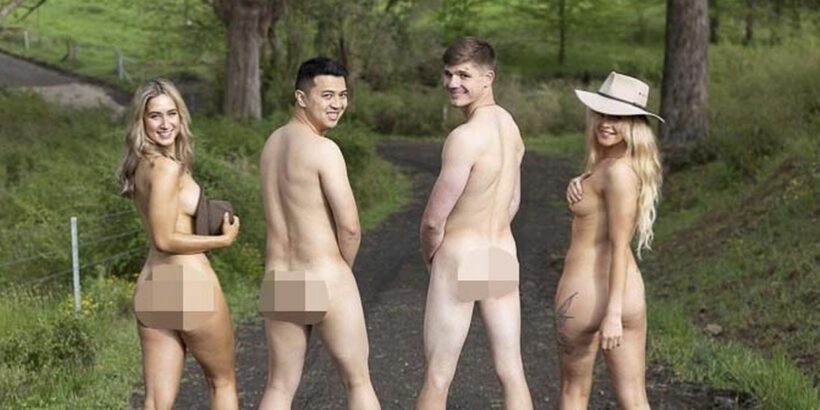 A group of brave students got their kit off for a naked calendar that's now raising money for a good cause.

Third-year vets from the Camden Farms Student Society in New South Wales, Australia, have been posing in the buff alongside some adorable furry companions, including puppies and horses.

The students are hoping the project, Flash for Floods, will raise money for the Australian Red Cross, which will use the funds to support victims of flooding.

On Australian breakfast show The Today Show, three of the models – Grace Iacobbe, Hamish Mills and Lia Domney – described the experience of posing for the calendar.

Grace said: "[The photoshoot] was so fun. We shot it last weekend in Camden over two days at a couple of different locations. It was the best fun, I think everyone had a positive experience, there was plenty of laughs, and lots of different animals which you'll see in the calendar. It was a good time."

She added that the animals were sometimes "unpredictable" on set and so the team had to roll with the punches.

"Naturally I think we're good at the working-with-animals part – the being naked was a bit of an extra factor on top!" she said.

"But it's amazing what you can cover up with an Akubra [Australian hat] as well."

Meanwhile, Hamish added there was "only a little bit" of fear as the young vets stripped off.

"I think I was naturally a little nervous when we started but as we got into it, it felt very natural."

When asked if it was the girls' idea to get naked for charity, Hamish said: "No, us boys were all for it."

This is the 13th annual calendar the vets have put together for charity, and the project supports a different good cause each year.

"We picked the Australian Red Cross because of the ongoing flood crisis that's going on," Lia explained.

"The majority of our year lives in Camden, so we personally experienced a lot of the devastating repercussions that came with the floods, whether it was local businesses being closed [or whether it affected] our farms and animals, so this cause is really near and dear to our hearts."

This year, bouts of floods have devastated various parts of Australia.

In July, heavy flooding devastated the Central Coast and Sydney areas of New South Wales, causing about 85000 people to be displaced or asked to leave their homes by authorities.

Parts of New South Wales were also impacted by flooding between February and April, which also caused damage in southeast Queensland, and as recently as last month, during which time the regions of Victoria and Tasmania also experienced floods.