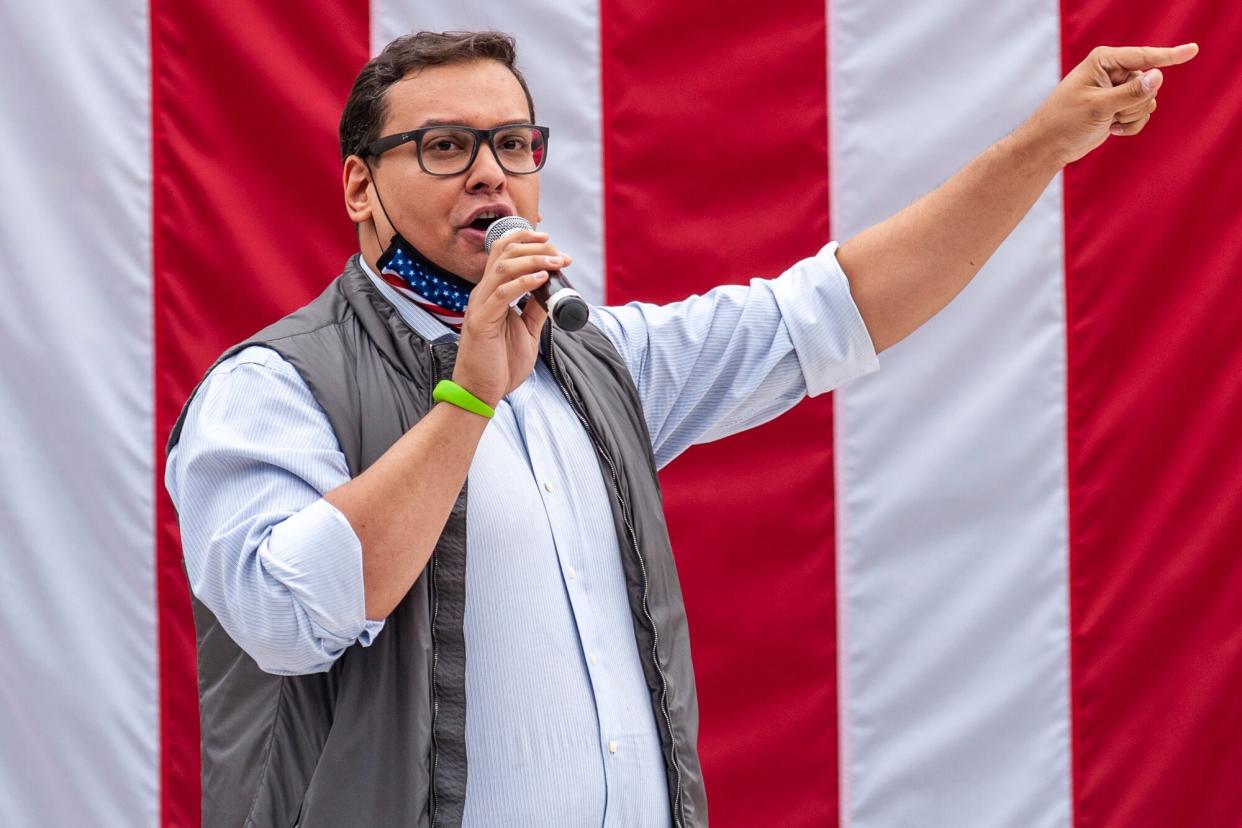 A disabled veteran claims that George Santos — the new Republican congressman who is under investigation after admitting he lied about large portions of his resume — purportedly bilked him out of $3,000 meant to go toward life-saving care for his dog.

Santos, 34, has denied the claims, telling media site Semafor he has “no clue who” the veteran — who shared text messages allegedly sent between him and Santos, and whose story was backed up by others — is.

In an interview with Patch, veteran Richard Osthoff said he was connected with Santos after his service dog, Sapphire, was diagnosed with a stomach tumor. Santos was at the time going by the name Anthony Devolder, and running an alleged charity called Friends of Pets United.

According to Osthoff, Santos set up a GoFundMe to raise funds for Sapphire, but once the funds reached $3,000, he seemingly disappeared.

“To everyone who helped me and Sapphire raise the money for her surgery, I’m sorry to say that we were scammed by Anthony Devolder and Friends of Pets United FOPU,” a 2016 Facebook post by Osthoff reads.

Sapphire’s tumor grew, and she had to be euthanized, with Osthoff resorting to panhandling to pay for her euthanasia and cremation, he told Patch. “It was one of the most degrading things I ever had to do,” he said.

Osthoff, who told Patch he suffered from PTSD, said that Sapphire “never left my side in 10 years. I went through two bouts of seriously considering suicide, but thinking about leaving her without me saved my life. I loved that dog so much, I inhaled her last breaths when I had her euthanized.”

A police sergeant who was friendly with Osthoff tried to intervene on his behalf, allegedly reaching Santos by phone and finding him “totally uncooperative.”

In text messages shared to the outlet, Santos tells Osthoff that his charity is “audited like every 501c3 and we are with the highest standards of integrity,” and that Sapphire might not be a candidate for the surgery, in which case funds would be “moved to the next animal in need.”

But as The New York Times reported earlier this month, it’s unclear that Santos’ charity was audited — or that it was even a charity at all.

A campaign bio claimed Santos ran Friends of Pet United and used it to save 2,500 dogs and cats between 2013 and 2018. While the Times found that the organization at one point had a Facebook page and once hosted a 2017 fundraiser, the Internal Revenue Service has no record of a registered charity going by that name.

The group that threw the 2017 fundraiser with Santos’ supposed charity also told the Times it never received any funds raised at the event, despite Santos charging $50 a head for entry.

RELATED: Incoming Rep. George Santos Apologizes for ‘Embellishing My Resume’: ‘I Said I Was Jew-ish’

Santos has admitted to a number of lies in recent weeks following the Times‘ reporting.

While he previously told Republican officials he was a “star” volleyball player at Baruch college who later obtained an MBA at New York University, Santos has admitted he didn’t go to college at all.

On Twitter, he has previously said he owned “13 properties” — another lie to which Santos now freely admits.

“George Santos does not own any properties,” Santos said of himself to the New YorkPost, when asked about the claims.

The Times reports that Santos’ family frequently struggled to pay rent in Queens over the years, and borrowed thousands of dollars from an acquaintance who claimed they were never repaid. Santos’ landlord, Nancy Pothos, told CBS that the lawmaker moved out in August 2022, just months before being elected.

Santos has also previously claimed he worked at as an associate asset manager at Citigroup from February 2011 to January 2014, and as a project manager at Goldman Sachs where, according to his resume, he was responsible for “2X revenue growth (300M to 600M)” in roughly seven months. Neither company has a record of him working there.

Never miss a story — sign up for PEOPLE’s free daily newsletter to stay up-to-date on the best of what PEOPLE has to offer.

In 2020, when he launched his first run for the House, he stated in a financial disclosure that he had no assets and no earned income. But during his second run for the House in 2022, Federal Election Commission filings showing he lent at least $700,000 to his campaign, and $27,000 to his political action committee. In campaign documents, Santos further claims to have earned millions of dollars in 2021 and 2022 — from a business he launched in May 2021.

Late last month, the Nassau County District Attorney’s Office announced it was looking into Santos and reports surfaced that federal investigators had also opened an inquiry into Santos’ financial disclosures.