Vigilante veterans group claims they have uncovered a ‘child sex trafficking camp’ with a ‘hidden bunker of stuffed toys’, a ‘rape tree’ and a branch etched with the name ‘Maddie’

A vigilante veterans group claim to have discovered a child sex trafficking camp with an underground bunker, a so-called ‘rape tree’, and a branch with the name ‘Maddie’ carved into it.

The abandoned camp near Tucson, Arizona, was uncovered by Veterans On Patrol, which helps ex-servicemen who have become homeless.

The veterans believe the site was used to confine and sexually abuse children, although police say they have carried out a full inspection and believe it was solely used as a homeless shelter. 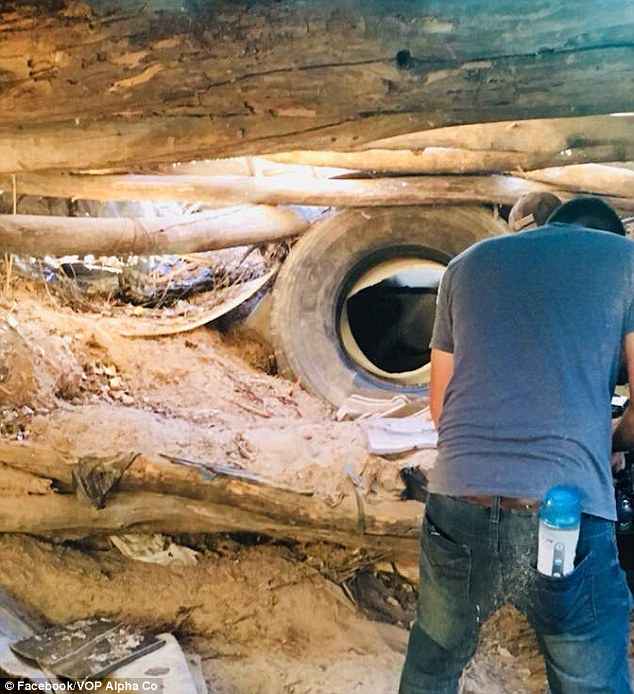 The group believe this bunker, accessed through a small hole held up by a tire, was used to confine and sexually abuse children, although police say they have carried out a full inspection and can find no evidence of this theory. 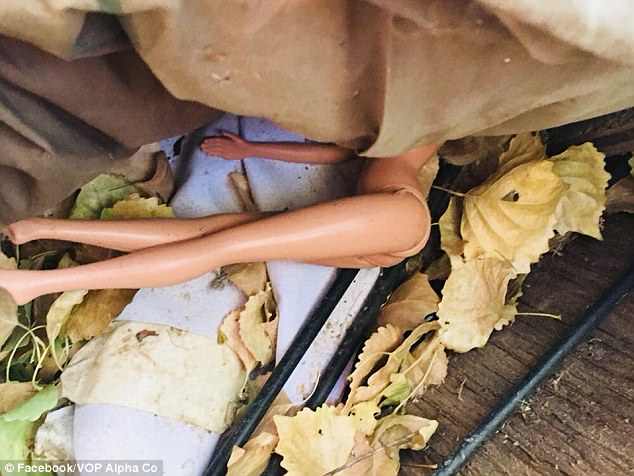 Children’s toys and clothes were uncovered at the site by Veterans on Patrol, which helps homeless ex-servicemen. Pictured: An old Barbie doll 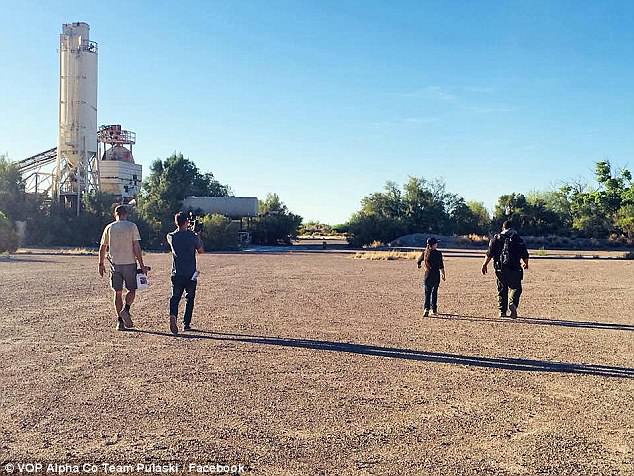 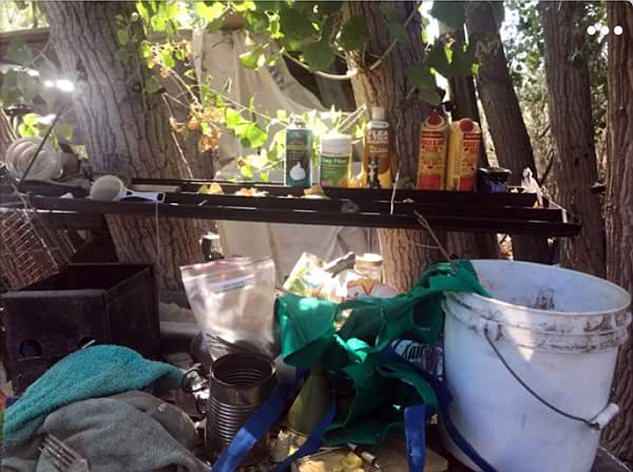 Craig Sawyer, a former Marine and Navy SEAL turned documentary-maker who has visited the camp, believes it was last occupied around two weeks ago

The bunker can only accessed by a small opening and was found stuffed with children’s clothing and toys. The veterans claim this was where children were locked up and held captive.

Meanwhile, Jon McLane, 35, chaplain of Bravo Base, a nearby homeless camp, found a tree with hand restraints and a swing, which he described as a ‘rape tree’.

The name ‘Maddie’ is also written across a tree trunk in child-like writing, while reporters who visited the scene found pornography and lubricant.

Tuscon police officers have visited the site and say there is no evidence that human trafficking has taken place there.

Cops also brought a cadaver dog along amid rumors there were bodies buried at the site, but the search turned up nothing.

There is no suggestion the landowner was involved in any alleged illegal activity on the site.

But Jon McLane, chaplain of the group which found the camp, says there is little doubt in his mind that trafficking victims were kept here. 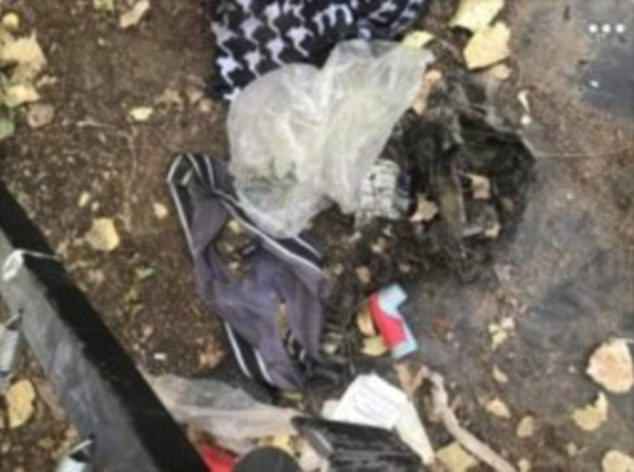 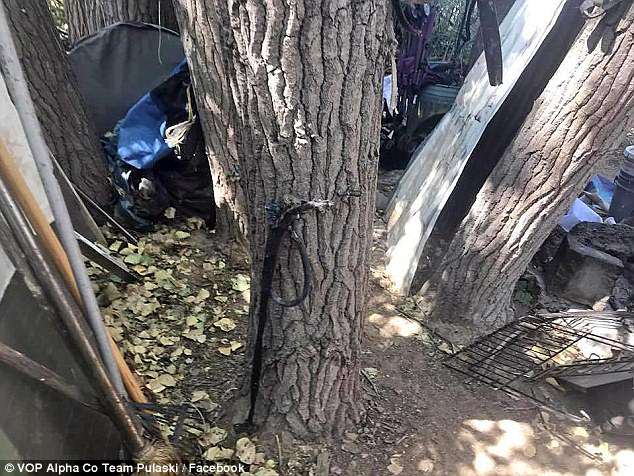 He told The Sun: ‘I’ve been a homeless advocate for a decade and I have seen hundreds of camps and I’ve been homeless myself and I’ve never seen a camp like this. 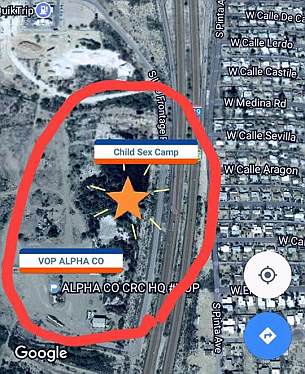 ‘From everything I saw I couldn’t imagine this site being anything but what we think it is – which is a child sex trafficking camp.’

The camp is located near a disused cement plant located just off the I-19 freeway, around seven miles from central Tucson.

Craig Sawyer, a former Marine and Navy SEAL turned documentary-maker, was invited to the site by Veterans on Patrol shortly after it was discovered.

He said: ‘I never expected to see something his heinous and inhumane this close.

‘I’ve heard of rooms full of kids in houses and basements and things like that, but nothing underground like this, like an underground cell, it’s pretty creepy.’ 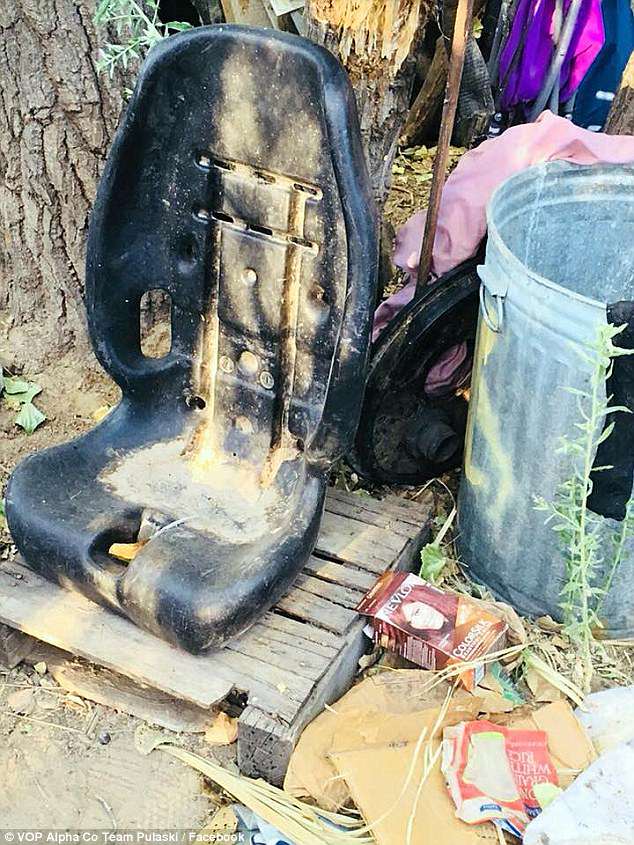 Volunteers have called police to the site to investigate, but officers say there is no evidence of any criminal activity there, including sex trafficking 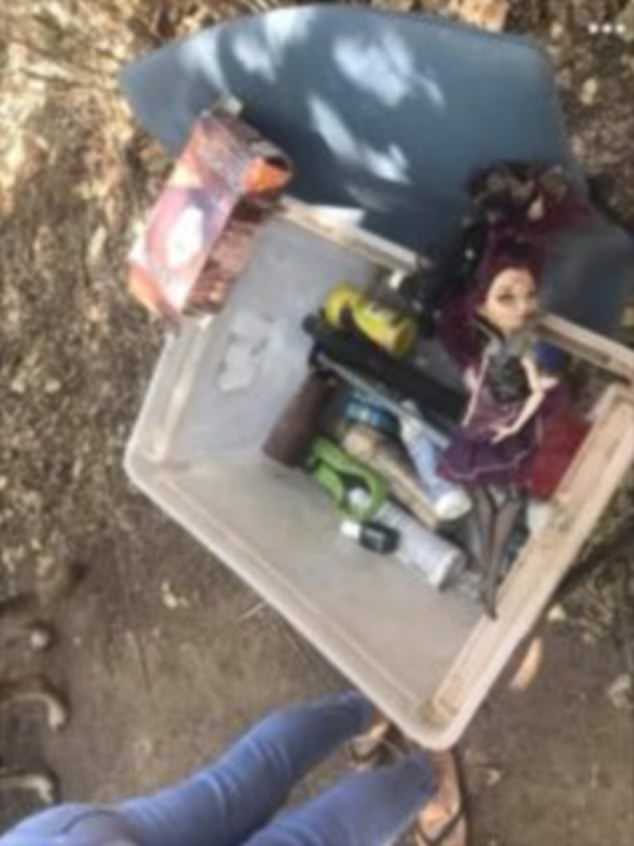 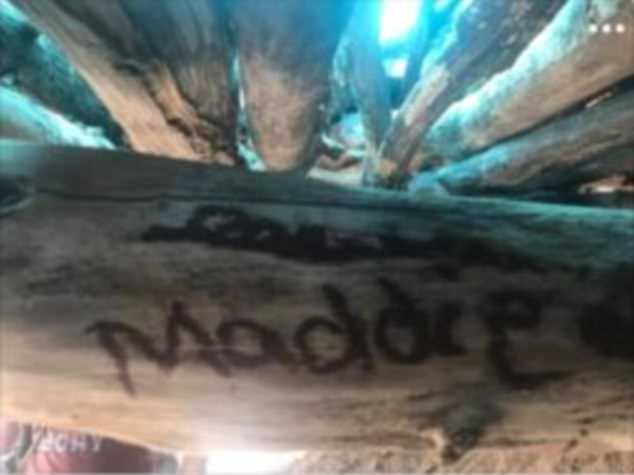 The name Maddie was found carved into a tree trunk in child-like writing. Veterans say they were tipped off to the location by homeless people last week 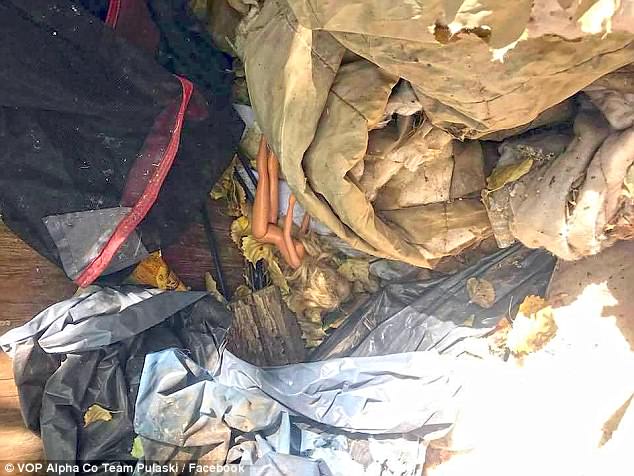 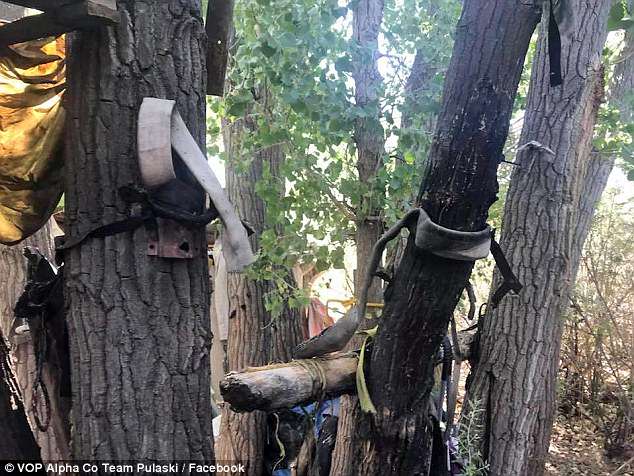 Tucson Police Department said: ‘Officers, detectives, and command staff conducted a thorough inspection of the site, spoke to the reporting parties, and collected evidence,’ it said in a statement.

‘Based on the department’s investigation to this point, there is no indication this camp is being used for any type of criminal activity, including human trafficking.

‘Yesterday, an unsubstantiated assertion was made that a body might be buried at the site. A cadaver dog was used to check the area with negative results.’

Dailymail.com has contacted Tucson Police Department, the FBI and Veterans On Patrol for comment. 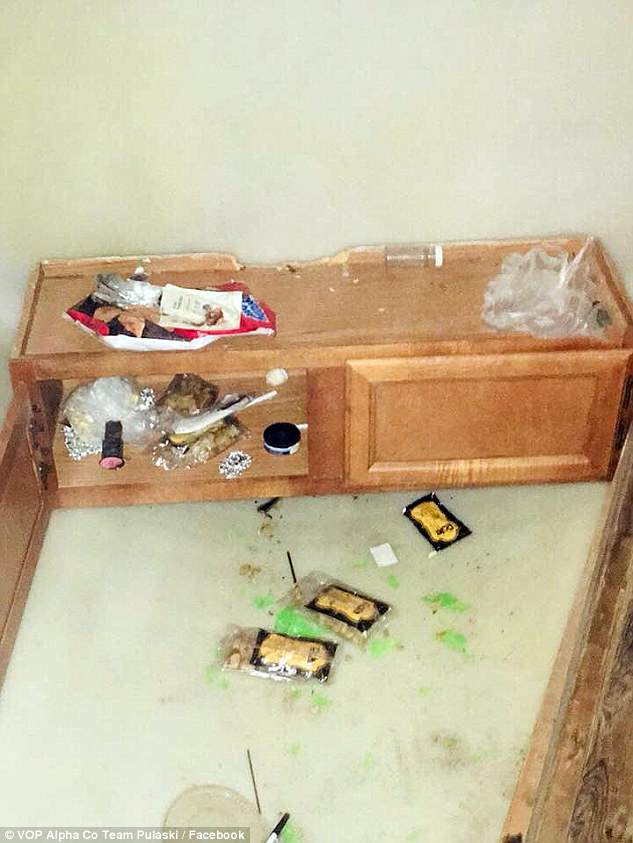 The group claims that they have found items including children’s hair brushes with blonde hair caught between the combs at the camp (pictured, inside the ‘cell’) 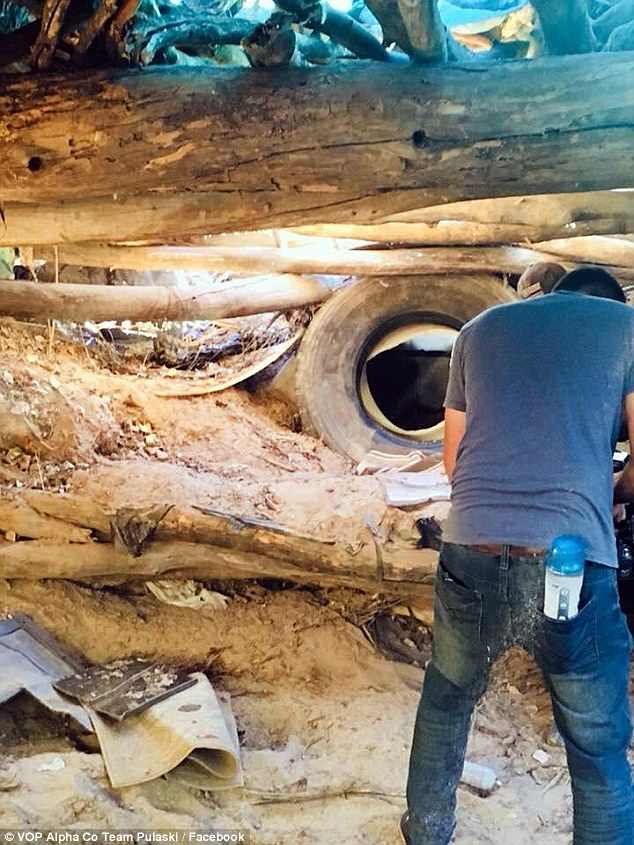 A veteran’s group from Arizona claims to have uncovered what they describe as a child sex trafficking camp on the outskirts of Tucson. Pictured here is the entrance to an underground enclosure they believe was used to imprison children 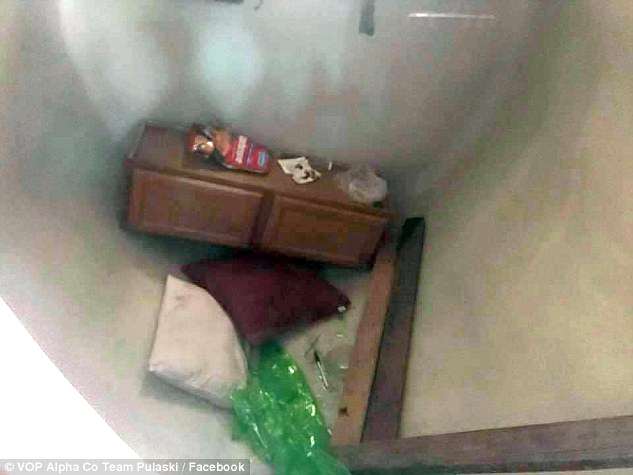 Veterans on Patrol, which discovered the camp, say the entrance to the cell is only large enough for a child to fit through and can be locked from the outside. Inside (pictured) is a small chest of drawers and some empty packets of food 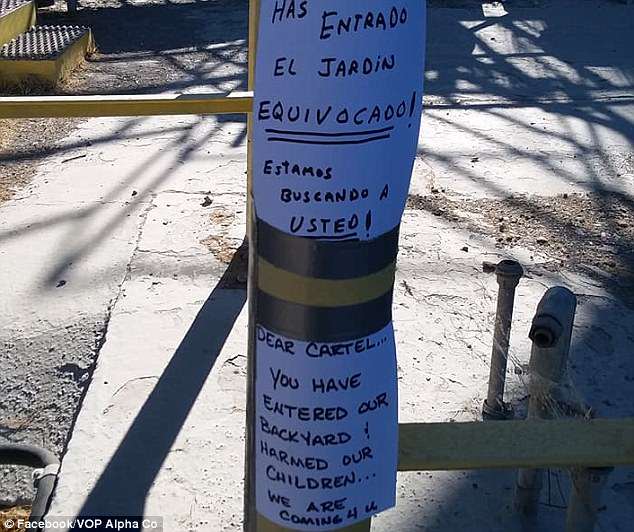 This sign, written by Veterans on Patrol, warns alleged child sex traffickers that ‘we are coming for you’