HENDERSON, Nevada — If you didn't know the name Victor Wembanyama before this week, chances are you now know the projected No. 1 2023 NBA draft prospect. The 7-foot-3 French center traveled to Las Vegas with his Paris-based team, Metropolitans 92, for a pair of preseason games against projected No. 2 pick Scoot Henderson and the G League Ignite.

The first game on Tuesday night surpassed all expectations with both players putting on a show. Wembanyama arguably had the best half of basketball from any NBA prospect in recent memory, connecting on seven 3-pointers on 10 attempts and finishing with 37 points and five blocks.

"It was definitely a duel, and both teams were playing hard," Henderson told Yahoo Sports this week. "[Wembanyama] is really good. He's a good shooter, he's lanky and it was a lot of film watching the last few days of learning his tendencies, especially on defense."

There is mutual respect from both players. Heading into the week, Wembanyama said Henderson was his favorite player in this draft class.

"He’s the most reliable guard in our class, and he’s really a great player," Wembanyama said. "If I was never born, I think he would deserve the first spot."

In any other year, Henderson would be favored to go No. 1. He just happens to be in the same draft class as a once-in-a-lifetime player.

"Everybody’s been a unicorn over the last few years, but he’s more like an alien," Los Angeles Lakers star LeBron James said of Wembanyama after seeing him play for the first time. "No one has ever seen anyone as tall as he is but as fluid and as graceful as he is out on the floor. His ability to put the ball on the floor, shoot step-back jumpers out of the post, catch-and-shoot threes, block shots. He's for sure a generational-type talent." 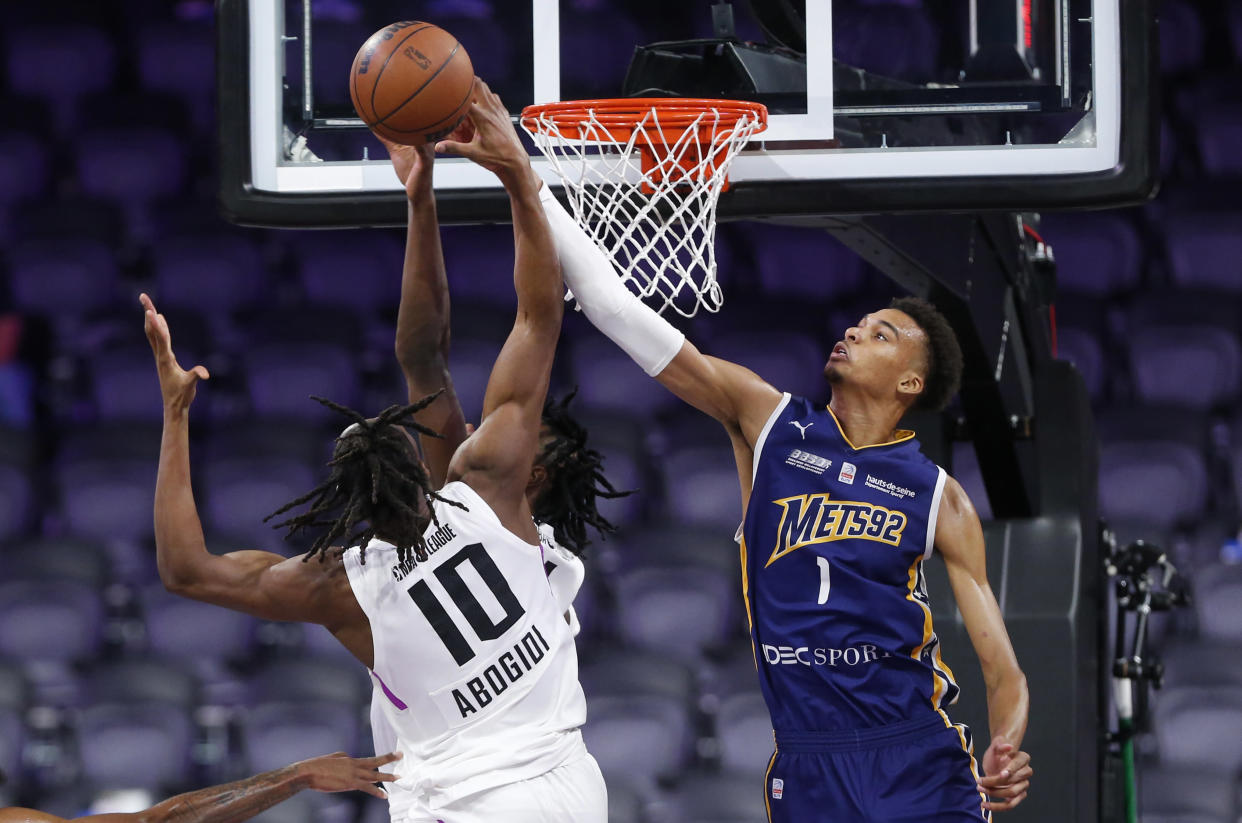 Wembanyama does things on the court that seem impossible. He runs the floor like a guard, is deadly in the pick-and-roll option and has a presence in the lane like no one else with his 8-foot wingspan.

"That was one of the most impressive two-game showings in recent scouting history," one NBA scout told Yahoo Sports. "Whoever gets the No. 1 pick probably won't trade it for anything. [Wembanyama] is the most sought-after prospect in a really long time, and he does things on the court that no other player can do."

Wembanyama has done enough in the first five games of his season to shut it down and not log a single minute of five-on-five action, nine months before the draft in June. The benefit is to avoid any potential injury to his long, lanky frame and stay healthy before he hits the NBA. Wembanyama brought the speculation he was going to sit out the rest of the season to a standstill, telling reporters after Wednesday's practice he plans on playing the rest of the season.

"I can't accept just to quit like that," Wembanyama said. "I understand why people would say that, but it's not me. I wouldn't have joined the team if I wasn't going to play and go to the end."

His agent, Bouna Ndiaye, reiterated Wembanyama's sentiment, telling ESPN, "We didn't come here to hide, he wants to play. NBA people are telling me to shut him down, and we are not going to shut him down. He wants to compete and get better. With Victor, it's basketball first and everything else second."

On Thursday afternoon, Wembanyama put on another unbelievable performance in the final exhibition game, doing everything from catching impossibly high lobs, hitting deep pull-up threes from Stephen Curry range, and even showing off a Dream Shake for a fadeaway jumper in the corner. Wembanyama finished with 36 points, 11 rebounds, four blocks and four assists (Henderson left the game in the first quarter after banging knees with Wembanyama and didn't return).

There will be a handful of NBA teams racing for last place in order to get a 14% chance of landing Wembanyama and changing their franchise for years to come. The San Antonio Spurs, Utah Jazz, Oklahoma City Thunder, Houston Rockets, Orlando Magic and Charlotte Hornets are teams that arguably have the best chance of landing the greatest prospect since James and a player who is a cross between Kevin Durant and Rudy Gobert.

"I haven't done anything really big yet, I haven’t played in the NBA, but seeing my name next to great players’ names, obviously it makes me happy," Wembanyama said after Thursday's game. "But at the end of the day, I’m just trying to be myself and do my thing."

Basketball fans got a glimpse of what Wembanyama could be, and at just 18 years old, it's obvious he has the potential to be one of the best players to ever play the game.