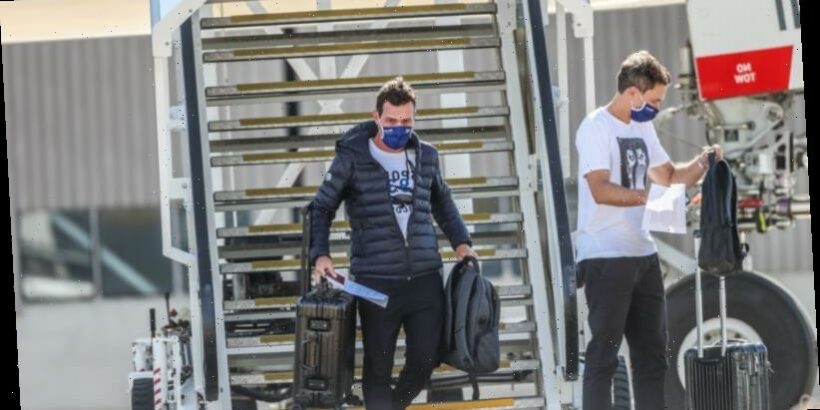 Victoria has reached a nine-day run of zero locally acquired coronavirus cases, as more international tennis players arrive in Melbourne ahead of the Australian Open.

The state reported zero locally acquired cases and two new cases among international travellers in hotel quarantine on Friday. More than 15,000 tests were completed on Thursday.

Two busloads of tennis players arrived at the Grand Hyatt Hotel in Melbourne's CBD on Friday morning, where they were greeted by a strong police presence.

The government has said the players will be subject to the "strictest rules for tennis anywhere in the world" as they quarantine for the next two weeks, but that is little comfort to Victorians stranded in the "red zones" of Sydney and Brisbane, who are barred from returning home.

Stranded travellers have told The Age of their growing frustration as Premier Daniel Andrews could only offer "hope" that red zones would be scaled back in the coming days.

"Nobody is getting an answer as to why the tennis players can come in but nobody else can," Melbourne businessman John Frostell said.

More than 100,000 people have received permits to travel to Victoria since the state's new "traffic light" permit system was introduced on Monday.

More than 82 per cent of applications were from Victorians in green zone areas, 9 per cent from people in orange zones and the remainder from people seeking worker permits or trying to transit through orange and red zones.

Mr Andrews said he hoped to be able to announce in the coming days that some postcodes in Sydney and Brisbane would no longer be red zones, effectively shrinking the areas from which travellers are banned from returning.

But he could not provide stranded Victorians with a timetable to return. "I just want to assure all Victorians, and particularly, those that want to come home but can't because it's not safe right now, you will be in this circumstance for not a moment longer than the public health experts tell me you have to be," Mr Andrews said.

Eighteen Victorians who completed their hotel quarantine stay at the Grand Chancellor in Brisbane when there was a dangerous outbreak of the UK variant of the virus have been contacted and some, but not all, may need to isolate.

Meanwhile, up to 25 per cent of the state's public sector workers and up to 50 per cent of office workers in the private sector can return to their desks from Monday, without being required to wear a mask indoors. However, the Premier and employer groups predict flexible working arrangements are here to stay.

Office workers won't have to wear masks indoors, but they are still required in shops, hospitals, on public transport and on planes.

NSW recorded no new locally transmitted cases for the first time in a week on Thursday.