Victoria’s crime rate jumped 2.7 per cent during the COVID-19 pandemic with more than 32,000 public health fines fuelling the rise.

New data released on Thursday shows more than 32,000 lockdown breaches were recorded in the 12 months to September 2020 following the creation of six new public health and safety offences. 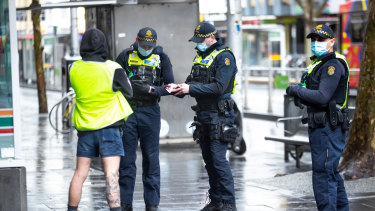 This included 29,223 fines being issued to those caught flouting the Chief Health Officer’s stay at home directions, alongside 66 body corporates.

A further 3337 fines were issued to Victorians caught without mandatory face masks during the second half of the state’s strict lockdown measures.

Police also recorded 34 offences against those who failed to comply with self-isolation and quarantine orders.

Lockdown breaches were the fifth most common crime recorded statewide, making up 6 per cent of all offences over the past 12 months.

Family violence-related crimes increased by 7.5 per cent with more than 90,000 offences recorded.

The highest number of crimes recorded were in the local government areas of Melbourne, Latrobe, Yarra, Greater Shepparton and Horsham. And while three of the top five actually recorded small declines in the number of offences committed in their neighbourhoods, Yarra’s crime rate per 100,000 residents rose 5.1 per cent and Horsham’s surged 23.2 per cent.

It comes just weeks after Mernda woman Celeste Manno, 23, was allegedly murdered in her home by a man who was subject to an interim intervention order.

The agency said the largest decreases were in areas including arson and disorderly or offensive conduct, with the state in lockdown during half the 12-month period due to COVID-19.

There were also drops in the number of thefts from shops, thefts from cars and residential non-aggravated burglaries.