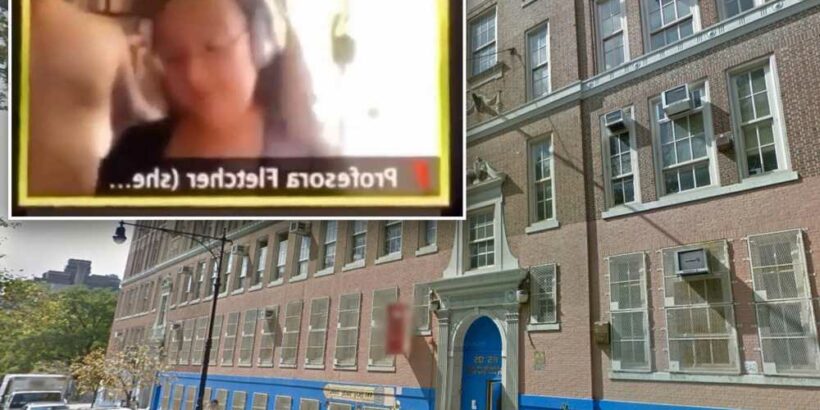 Front-runners come under attack during lackluster debate for NYC mayor

Here is a video showing an NYC teacher sucking on the nipple of a topless man while conducting a Zoom class.

The video landed Amanda K. Fletcher, a Spanish teacher at Columbia Secondary School for Math, Science, and Engineering, in the “rubber room” pending a disciplinary process.

The city Department of Education removed Fletcher from her teaching duties last October after the Special Commissioner of investigation for city schools found that Fletcher, 37,  “engaged in an inappropriate sex act” while remotely instructing her class.

Students from the Manhattan school who shared the video on Snapchat refer to the teacher  as “Profesora Fletcher.”

The 11-second clip obtained by The Post shows her mouth on the chest of a shirtless man standing behind her.

Fletcher, wearing headphones, then turns to face the camera, wiggles her shoulders, and smiles.

A student commented on Snapchat: “It’s the little dance after she sucked the nipple [that did it] for me,” followed by three laughing-with-tears emojis.

One of Fletcher’s students told investigators that during the Sept. 30 class, Fletcher was seen eating spaghetti with the shirtless man standing behind her for several minutes before she put her mouth on the man’s chest.

After turning her face back to the camera, she “resumed teaching and discussing a worksheet.”

The SCI report says another video clip “showed Fletcher’s face on the unidentified man’s exposed breast, during which time she rocked her head back and forth, possibly indicating an act of suckling.”

Fletcher, a DOE teacher since 2007, declined to be interviewed by SCI, and could not be reached for comment.