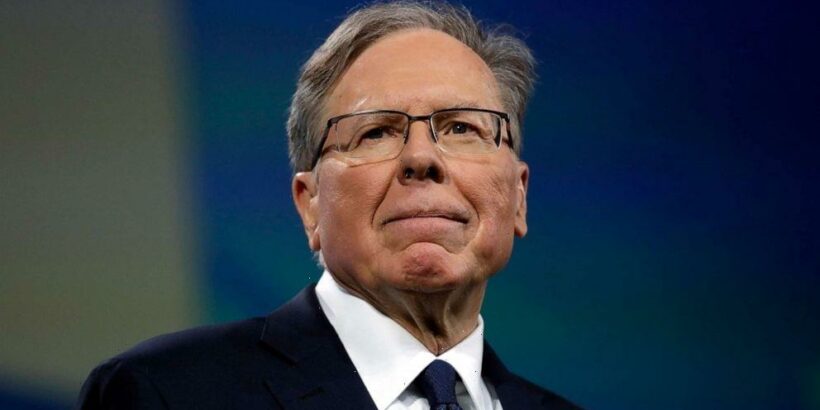 The New Yorker — along with the nonprofit newsroom the Trace — on Tuesday published a video that appears to show NRA Executive Vice President Wayne LaPierre struggling to kill an African savanna elephant for the NRA-sponsored television series “Under Wild Skies.”

“The dying animal rumbles in distress or to warn others — until someone else finally takes over to make the killing shot,” according to a statement from the People for the Ethical Treatment of Animals. “LaPierre’s wife stands by, laughing at the moaning elephant.”

The video shows guides tracking down an African savanna elephant for LaPierre, who then shoots and wounds it. When LaPierre seemingly attempts to kill the elephant at point-blank range, he shoots it in the wrong place three times, and a guide eventually steps in to fire a fatal shot.

The footage never aired over fears of the potential public relations consequences, The New Yorker reported.

In a statement to ABC News, NRA Managing Director of Public Affairs Andrew Arulanandam confirmed LaPierre was part of a hunt in Botswana. He said the hunt was “fully permitted and conducted in accordance with all rules and regulations.”

“The video offers an incomplete portrayal of the experience — and fails to express the many ways this activity benefits the local community and habitat,” Arulanandam said. “Such hunts are celebrated in Botswana, where they feed villages, contribute to the economy and culture, and are part of the fabric of the region.”

The African savanna elephant was designated as endangered on the International Union for Conservation of Nature’s Red List of Threatened Species last month.

The video was described as “sickening” by multiple wildlife advocate organizations.

“It’s sickening to see LaPierre’s brutal, clumsy slaughter of this beautiful creature. No animal should suffer like this,” Tanya Sanerib, international legal director at the Center for Biological Diversity, said in a statement. “We’re in the midst of a poaching epidemic, and rich trophy hunters like the NRA chief are blasting away at elephants while the international community calls for stiffer penalties for poachers — what message does that send? We need to halt all elephant killings or they’ll vanish forever.”

The killings likely disrupted the social and family bonds and caused emotional trauma to the remaining herd, Kitty Block, president and CEO of the Humane Society of the United States, said in a statement to ABC News.

“It was sickening to watch LaPierre’s elephant slaughter and the suffering he caused by his sloppy and cruel attack on this beautiful animal,” Block said. “This hunt occurred during the height of the elephant poaching crisis and makes horribly clear how evil this industry is: so much suffering and death for the sake of bragging rights and a trophy — pieces and parts of these magnificent creatures.”

PETA President Ingrid Newkirk urged “every member of Congress to watch this video” and “have the courage to reject NRA money.”

“Behind the NRA’s macho posturing are scared little men who pay tens of thousands of dollars for someone else to track elephants so that they can shoot them ineptly at close range,” Newkirk said.

The NRA filed for Chapter 11 bankruptcy in January. NRA lawyer Greg Garman said during the trial’s opening statements that LaPierre did nothing wrong and made the decision to put the group into bankruptcy to avoid having it placed in a receivership by New York authorities, according to the AP, citing court testimony.

LaPierre is also among four NRA leaders accused by New York Attorney General Letitia James of participating in fraud that contributed $64 million in losses. The money was used to finance their lavish lifestyles, the lawsuit, filed in Manhattan County, alleges.

In a statement issued after the lawsuit was filed, LaPierre called James’ investigation politically motivated and aimed at destroying the NRA.

A lawyer for LaPierre did not immediately respond to ABC News’ request for comment.