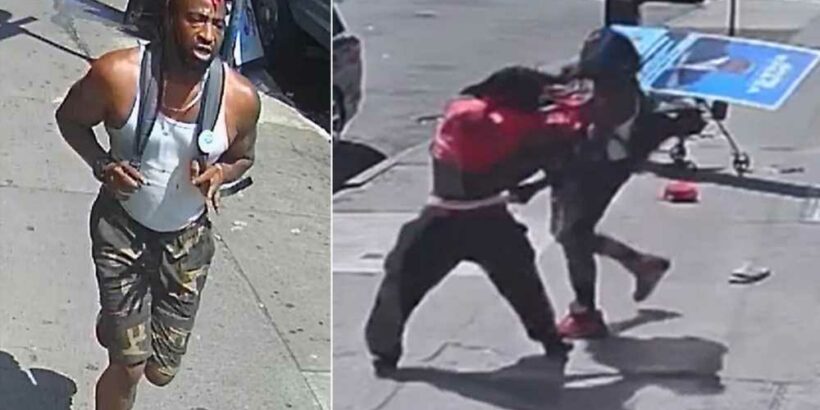 Disturbing new surveillance video shows the moment an Eric Adams campaign volunteer is stabbed repeatedly in the South Bronx — as the mayoral frontrunner said he planned to urge the victim to cooperate with cops.

The footage, obtained by NBC New York, shows a scuffle between the 42-year-old victim and his attacker spilling out onto the sidewalk around 2:30 p.m. — with the suspect knifing the man several times.

The attacker continues stabbing the volunteer even after he falls to the ground against a vehicle parked on Morris Avenue.

The suspect, wearing a white tank top, military fatigue pants and red bandana, then flees south on Morris Avenue with another man.

Earlier surveillance footage released by police showed the brutal attack from a camera at the storefront where the assault took place.

The new video is taken from a camera slightly down the street from the earlier footage.

Police later found an ice pick and a knife at the scene.

Speaking Sunday, Adams said the volunteer — who has nearly 50 arrests — was inspired by his mayoral campaign and “decided that he wanted to be a part of this movement.”

Adams said it was unclear if the victim’s role with his campaign was a factor in the attack.

On Monday, the Brooklyn borough president said he would visit the volunteer in the hospital a second time — to try to convince him to cooperate with police in the investigation.

Cops are looking for both the suspect and the accomplice.