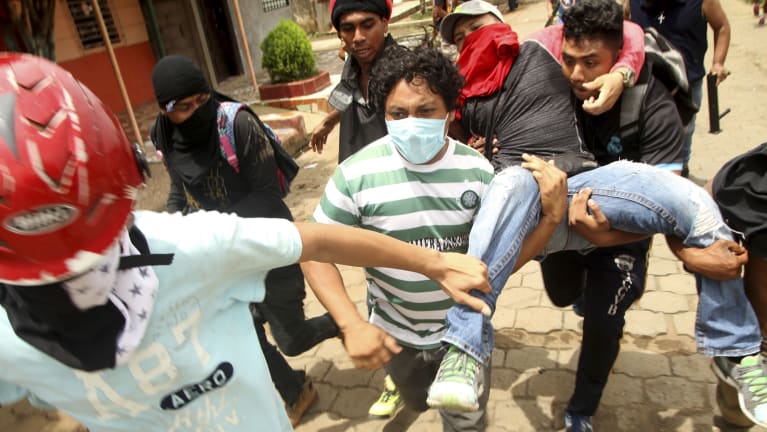 Opponents to the government of Nicaraguan President Daniel Ortega carry a wounded comrade, as the government forces enter the city of Masaya on Tuesday.

Youths armed with homemade mortars and slings fired off projectiles from behind brick barricades in the southern city of Masaya on Tuesday, local time, videos showed. Protesters there have kept a police station under siege for over two weeks in defiance of President Daniel Ortega.

Alvaro Leiva, a spokesman for Nicaraguan human rights group ANPDH, said at least 34 people had been injured in Masaya and six killed. Police declined to comment.

In a video provided by Leiva, a woman standing over the body of a man on the ground calls out for help to a line of police officers in riot gear who stand nearby, unmoving. "Help me," she screams. "He is not a dog."

Reuters could not immediately verify the authenticity of the video.

Nicaragua has been convulsed by unrest since Ortega in April proposed cutting pension benefits to cover a social security shortfall. The plan, later dropped, triggered demonstrations that turned fatal and led to demands for his resignation. 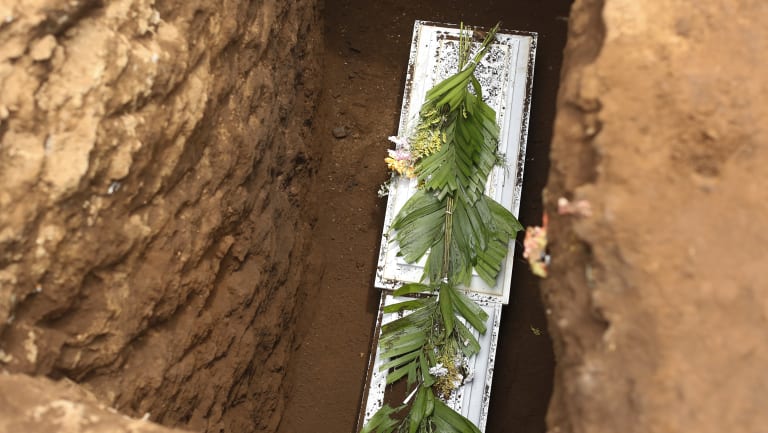 The coffin containing the body of 2-year-old Daryeli Velazquez Raude, one of the six Velazquez who died in blaze after armed assailants set fire to their house. Government officials blamed “delinquents” while civil groups alleged police and government employees were behind the attack.

Since then, at least 174 people have been killed in clashes between pro-Ortega forces and demonstrators, rights groups say.

Representatives of civil society organisations have called for early elections to end the impasse, but they broke off talks with the government on Monday until Ortega sent an invitation for international observers to enter the Central American country. 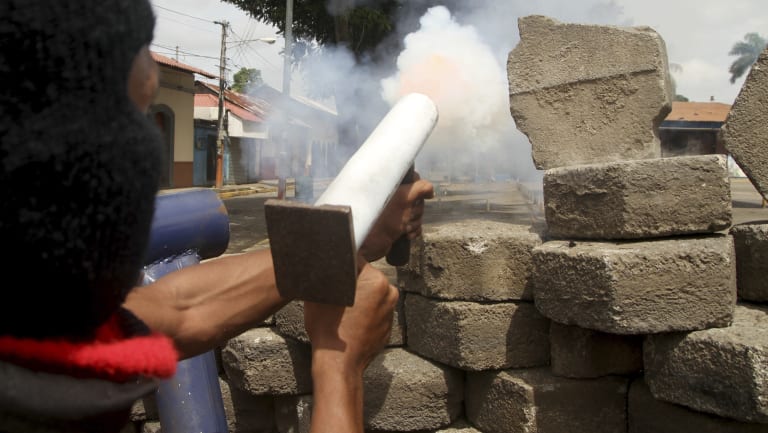 An anti-government protester fires a homemade mortar at the police from a barricade.

Juan Sebastian Chamorro, a leader of the main civic alliance seeking to broker agreement with the government, said there was no point in holding further talks about early elections "while people are being killed in the street."

The US government on Monday urged Nicaragua to stage early elections to end the violence, and Carlos Trujillo, the US Permanent Representative to the Organisation of American States, (OAS) was due to arrive in Managua on Tuesday.

Trujillo is scheduled to hold meetings to take stock of the situation ahead of an OAS permanent council special session on Nicaragua on Friday.