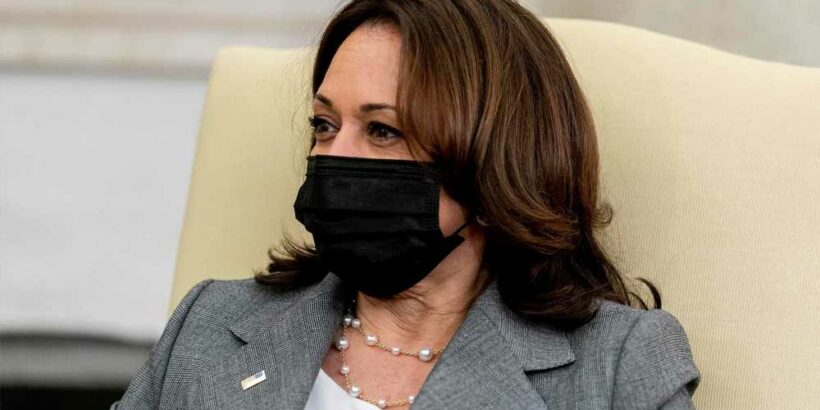 Is Joe up for tough questions?: Devine

Meghan Markle reveals her true self in Oprah interview: Devine

It’s humiliating for the president that almost three weeks since he appointed Kamala Harris as his border point-woman she still hasn’t visited the disaster zone, come up with a plan or held a press conference on the migrant crisis.

Instead, she’s visited a water- treatment plant in California and a bakery in Chicago, where the press pool reported on her sweet tooth last week.

“Her favorite is German chocolate, and [she] gets that for her birthday each year, and her staff had pre-ordered a slice for her. The bakery’s specialty is caramel cake, and she said she was looking forward to that too.”

Meantime, the self-inflicted humanitarian tragedy at the southern border has spiraled out of control, opinion polls are heading south, the Biden appointee in charge has abruptly resigned, El Salvador’s president has refused to meet the visiting US envoy, and the VP is defying her boss and staying far away from the stinking mess to protect her reputation.

But while the pair play “pass the parcel,” the vacuum of leadership is only fueling a humanitarian catastrophe.

President Joe Biden knew when he appointed Harris to manage the crisis on March 24 that it was a poison chalice, which gives you a hint of the growing wariness in a relationship where the VP is referred to by insiders as “The Heiress” and Biden is regarded as incapable of serving a full term.

The White House announced at the time that Harris would “lead our efforts with Mexico and the Northern Triangle . . . in stemming the migration to our southern border.”

But two days later, when asked when she planned to go to the border, Harris responded with hysterical laughter. “Not today,” she chortled.

“The vice president is not doing the border,” her spokeswoman Symone Sanders told reporters.

Instead, Harris would be addressing the “root causes” of the surge in migration. To that end, she’s made two phone calls to regional leaders.

But the only root cause that matters is to restore Trump-era border-protection measures that Biden unwound by executive decree: restore the “Remain in Mexico” policy for asylum seekers, restart deportation of criminal aliens, finish the border wall and stop making children bait for cartels.

Biden has tried to claim the border surge is just a seasonal uptick, but numbers are soaring exponentially. Last month alone, 19,000 children were recorded crossing the border, double the previous month. The government reportedly anticipates more than 35,000 migrant children will need to be cared for by June.

Biden has put the sugar on the table for people smugglers and children are suffering.

Video footage online shows buses at a detention center in Texas in which every adult on board is accompanied by one small child. Biden’s policy of accepting unaccompanied minors has made children the tickets for entry to America, but how do we know if these kids are even related to the adults holding their hands? No one is doing DNA tests.

Another video shows a sobbing 10-year-old Nicaraguan child walking alone on a road in Texas before telling border agents he is afraid “they” might “rob or kidnap me or something.”

During a press conference last week, Texas Gov. Greg Abbott made stunning allegations of child sexual abuse at a migrant facility in San Antonio that holds more than 1,300 migrant children.

He told Fox News on Thursday that allegations of child sexual assault had been lodged with two state agencies in Texas: “[It] was a very specific description about ways in which children were being sexually assaulted, where it was happening, who was doing it and the horrific things that were being done which I cannot tell you on TV … The Biden administration knows about this … and yet still nothing is happening.”

Nothing except cynical distraction, denial and deflection.

House Speaker Nancy Pelosi dismissed his complaints as “ridiculous . . . The fact is we’re on a good path at the border under the leadership of President Biden . . . It’s about restructuring . . . because we were in a very bad situation under the Trump administration.”

This is Biden’s Operation Warp Speed: How to ruin a country in 100 days.

So desperate is the administration that government employees quietly are being offered four months paid leave from their jobs to help care for migrant children in shelters at the border, reports The New York Times.

But the White House won’t even acknowledge there is a problem.

On Friday, press secretary Jen Psaki spent more than double the time talking about the Ukrainian border than America’s southern border: 262 words versus 94.

“The reason for accepting these children is that we feel it is not the humane step to send these kids back on their treacherous journey,” she said, as if the atrocities being committed in our name are compassionate.

She must be the only person in the administration with a conscience.

As Hunter Biden has his reputation laundered by a fawning media, his abandoned laptop reveals the extent of entitlement and privilege long enjoyed by the President Biden’s family and vigorously exploited by his crack-loving son.

In a 2015 email exchange, Hunter’s cousin Missy Owens asks him to procure a government appointment for her mother, Valerie Owens, the sister of then-VP Joe Biden: “I really want to get on something, but . . . mom needs it more than I do right now.” Hunter replies that he will “go through the list with Steve [Ricchetti, then Joe’s chief of staff, now White House counselor] and see what makes sense. I don’t know how much 2016 [the election] and nepotism plays into it.”

Lo and behold the following year, President Barack Obama appoints Aunt Val to a ceremonial role at the United Nations, a four-month stint that pays $26,000.

In addition, a memo to Hunter from his business partner Eric Schwerin in 2016 sets up two $12,500 per month “consulting” contracts for Aunt Val when the UN gig runs out.

The Biden Foundation is to provide a “Consulting Contract with Valerie Owens or her LLC for $12,500 a month for one year.”

The other consultancy is with the University of Delaware, to coincide with the announcement of its Biden Center with Joe as “founding chair.”

Missy herself, along with sister Casey, landed a federal job during the Obama administration, before moving to a lucrative “government relations” job with Coca-Cola. See how it works?

The rules never apply to the Bidens. Jobs, Ivy League berths, internships, judge clerkships, all are there for the taking. When family members have a run-in with the law, they are treated with kid gloves, whether it’s DWI, credit-card fraud, shoplifting, assaulting police, or lying on a background-check form about your drug use when buying a gun, as Hunter did in 2016.

Black people have served serious time for far less. Rapper Kodak Black, for instance, was sentenced to 46 months in prison on federal weapons charges in 2019 after lying on the form to buy firearms.

It’s a sick irony that, while Joe Biden wages war on white privilege, his 51-year-old son is the living embodiment of the worst of it.