Wallace CAN join the horsey set: Horse rider is allowed to take her mule into British Dressage competition after officials amend their rules

Banned from competing in dressage by officials, Wallace the mule was left with an understandably long face.

But his rider Christie Mclean has a streak of stubbornness and refused to take No for an answer.

And after she publicised Wallace’s plight last week there was a wave of support for her 11-year-old mount. 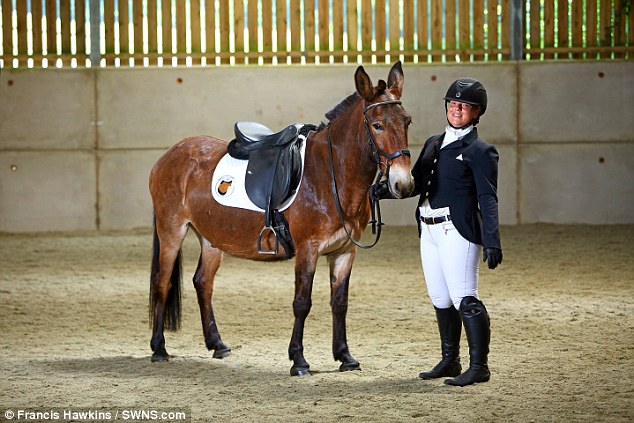 Wallace the mule, pictured with his rider Christie Mclean, was initially refused entry on the grounds that he is not a horse

Now British Dressage, the sport’s governing body, has amended its rules – and Wallace will be allowed to trot, canter and leap daintily with the best equestrians in official competitions.

He was initially refused entry on the grounds that he is not a horse. A mule is the offspring of a male donkey and a female horse. But British Dressage has now ‘harmonised’ its rules with those of international body, the Federation Equestre Internationale, which simply defines a horse as ‘born of a mare’.

Chief executive Jason Brautigam said: ‘We are delighted to welcome Wallace and his fellow mules to compete as part of our commitment to inclusion and diversity in dressage.’

Miss Mclean, 31, from Stroud, Gloucestershire is delighted. So are supporters on social media. One wrote: ‘Brilliant. Sooooo very wrong to discriminate against those with long ears.’