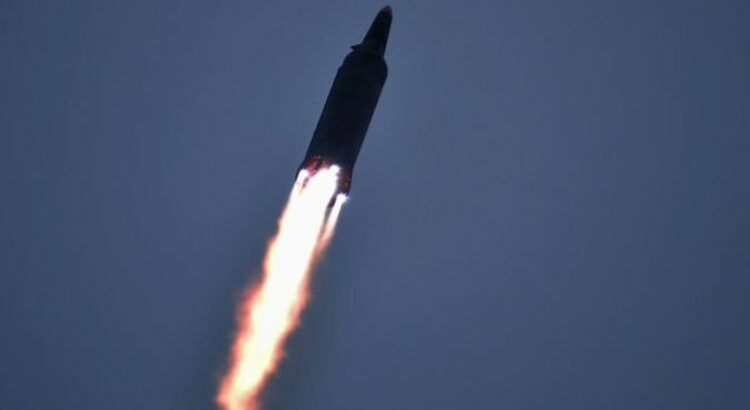 After two confirmed missile launches from the country, Japan and South Korea have claimed Kim Jong-un’s regime launched a third on Friday. A North Korean Foreign Ministry spokesperson has defended the previous missile launches, and skewered the US for “isolating and stifling” sanctions.

Japan’s Coast Guard claimed on Friday North Korea fired what they believe is a ballistic missile.

According to the Coast Guard, the missile has most likely dropped already, but the exact drop location is being determined.

They urged ships in the Sea of Japan not to approach missile fragments, should they discover them.

South Korea’s military added an unidentified projectile had been launched into the sea off its east coast.

If confirmed, the missile launch would mark the third this year, after two earlier in January.

On January 12, North Korea announced a successful test of a hypersonic missile, which they claimed travelled for 1,000 km and successfully hit its target after abruptly changing its course at the final stage of the flight.

The test was reportedly designed for final testing of capabilities of a domestically-developed hypersonic weapon.

Another launch took place on January 5.

The launches come after a statement from a Foreign Ministry spokesperson, who claimed the missile launches were an exercise of self-defence.

In an attack on the US, the spokesperson said American sanctions were aimed at “isolating and stifling” North Korea, and accused the US of maintaining a “gangster-like” stance.

saying that the North’s development of the new missile is part of its efforts to modernise its military and does not target any specific country or threaten the security of its neighbours.

They said: “Nevertheless, the US is intentionally escalating the situation even with the activation of independent sanctions, not content with referring the DPRK’s just activity to the UN Security Council.

“This shows that though the present US administration is trumpeting about diplomacy and dialogue, it is still engrossed in its policy for isolating and stifling the DPRK …

“If the US adopts such a confrontational stance, the DPRK will be forced to take stronger and certain reaction to it.”

On Wednesday, Joe Biden’s administration imposed sanctions on five North Koreans over their roles in obtaining equipment and technology for missile programs.

The measures were in response to the confirmed missile launches on January 11 and January 5, with the US adding they are seeking new UN sanctions on North Korea.

In addition, the State Department ordered sanctions against another North Korean, a Russian man and a Russian company for their broader support of the state’s weapons of mass destruction activities.

In an interview with MSNBC, US Secretary of State Antony Blinken called the missile tests “profoundly destabilising”.

He said: “The response we’ve seen… has been renewed missile tests, something that is profoundly destabilising, it’s dangerous and it contravenes a whole host of UN Security Council resolutions.

“I think some of this is North Korea trying to get attention. It’s done that in the past. It’ll probably continue to do that.

“But we are very focused with allies and partners in making sure that they and we are properly defended and that there are repercussions, consequences for these actions by North Korea.”