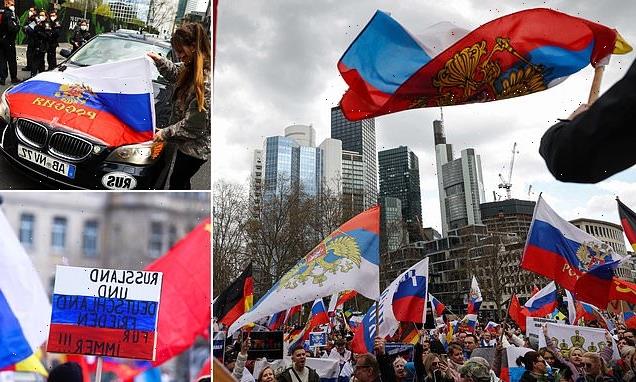 A 350-car motorcade set off from Hannover to be greeted by 700 counter-demonstrators pledging their support for Ukraine.

The motorcade, flying Russian and also a few German flags, is protesting against discrimination in Germany towards Russians following the Ukraine invasion.

The marches and convoys have been dubbed ‘a parade of shame’.

Police said fences had been put up to separate the pro-Russian protesters from the counter-demonstration and they added that the protests had been peaceful so far. 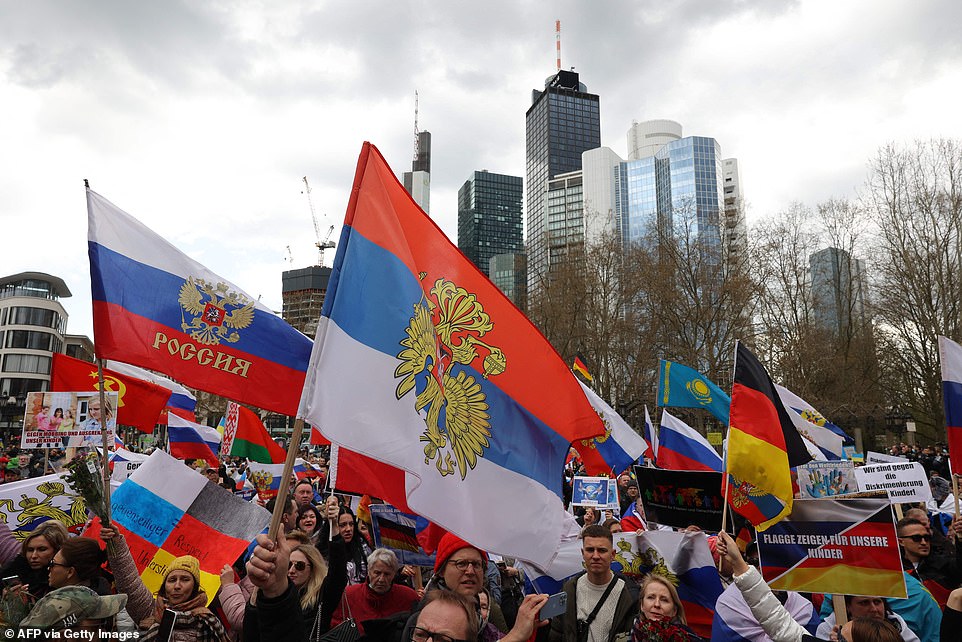 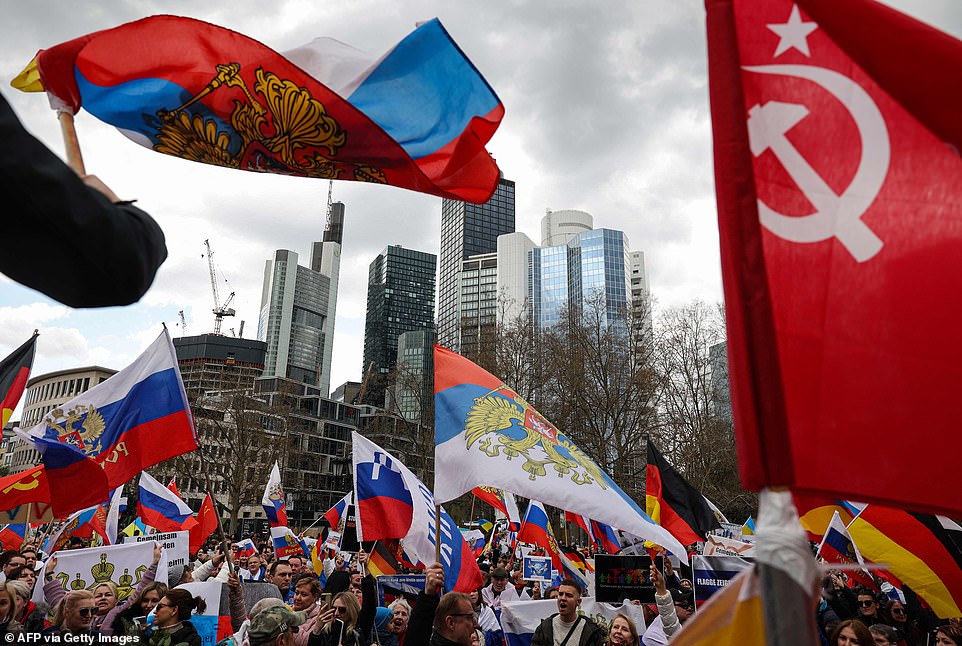 German and  Russian flags were carried by demonstrators, including one from the Soviet Union, right 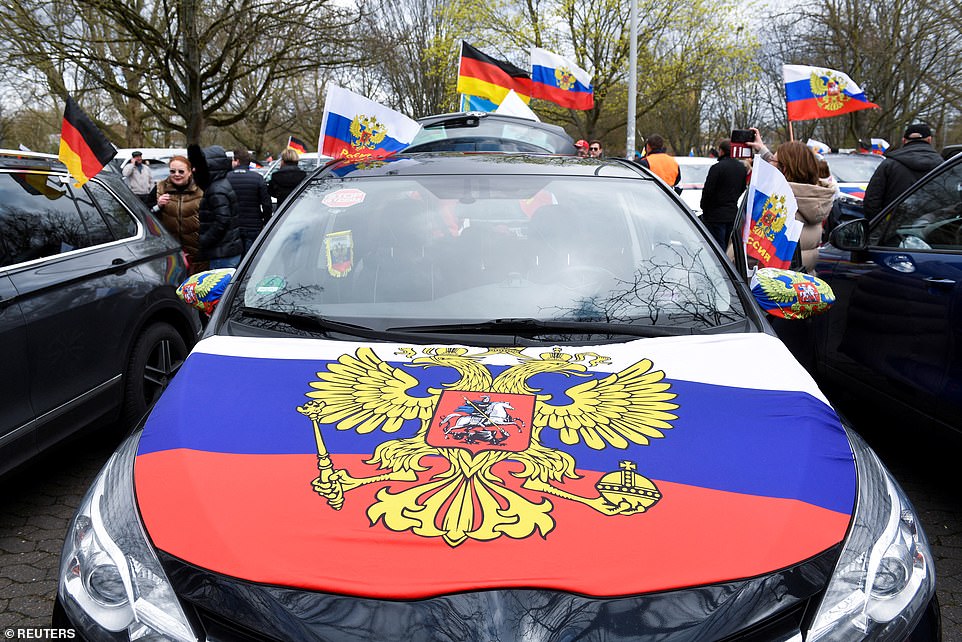 In Hanover, approximately 350 cars took part in a pro-Russian demonstration, with other demonstrations taking place in Frankfurt and Berlin 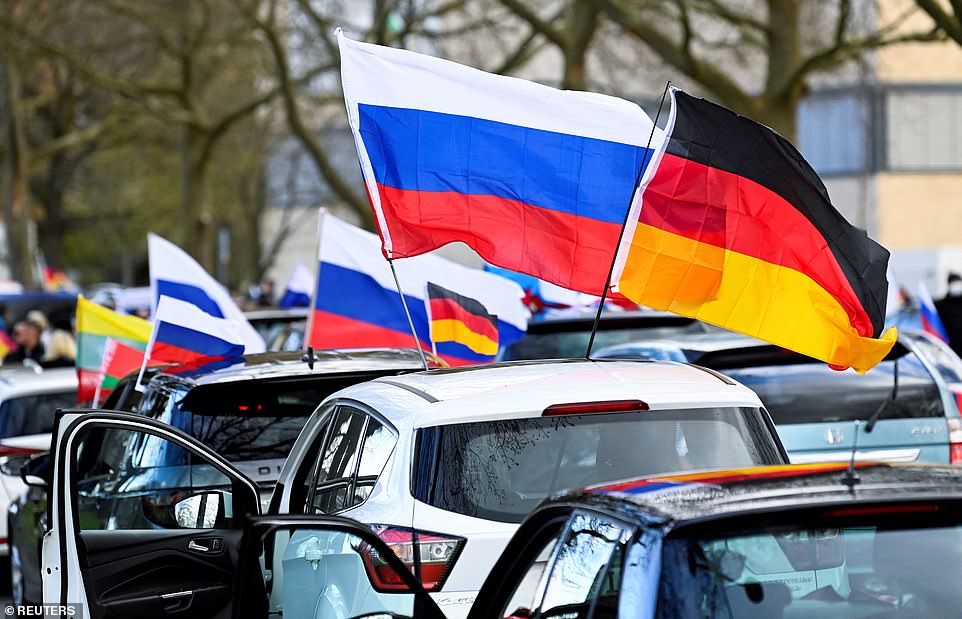 Around 235,000 Russian citizens live in Germany, according to government statistics from late 2020. About 135,000 Ukrainians lived in Germany before Russia’s invasion, based on the statistics, but around an additional 300,000 have arrived since the invasion.

In Frankfurt, pro-Russian protesters gathered for a march through the city centre after local authorities refused to allow a motorcade, local media reports said.

Counter-demonstrators assembled in two other locations in Frankfurt, with ‘Stop War’ banners and Ukrainian flags painted on their faces.

Police in Frankfurt said it was too soon to provide estimates of numbers at either protest. Local authorities expected around 2,000 people at the pro-Russian march.

Local authorities had warned ahead of the protests that while protesters had a right to assemble, Russian war propaganda or endorsements of Russian aggression would not be tolerated, local media reported. 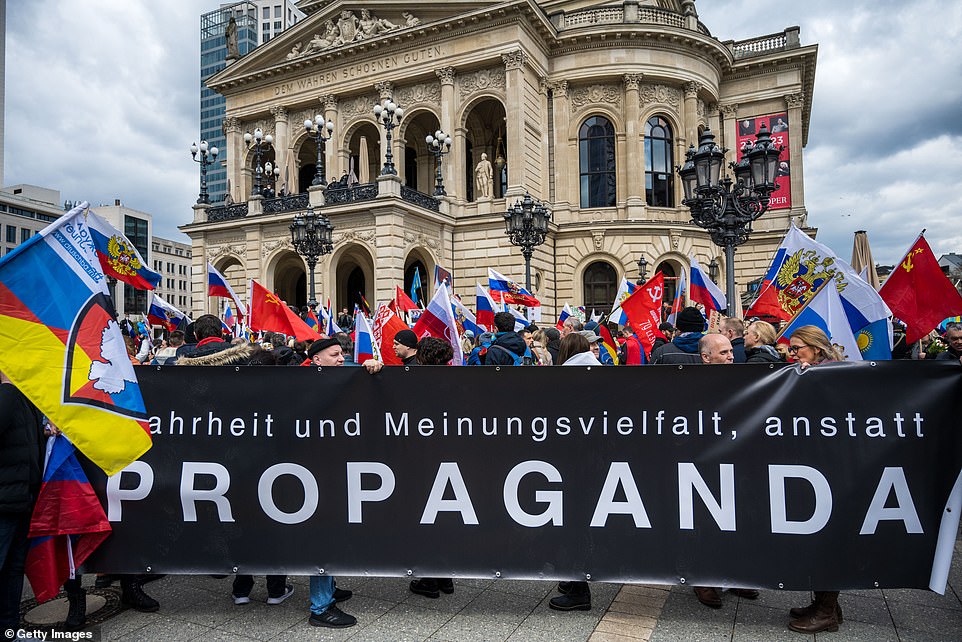 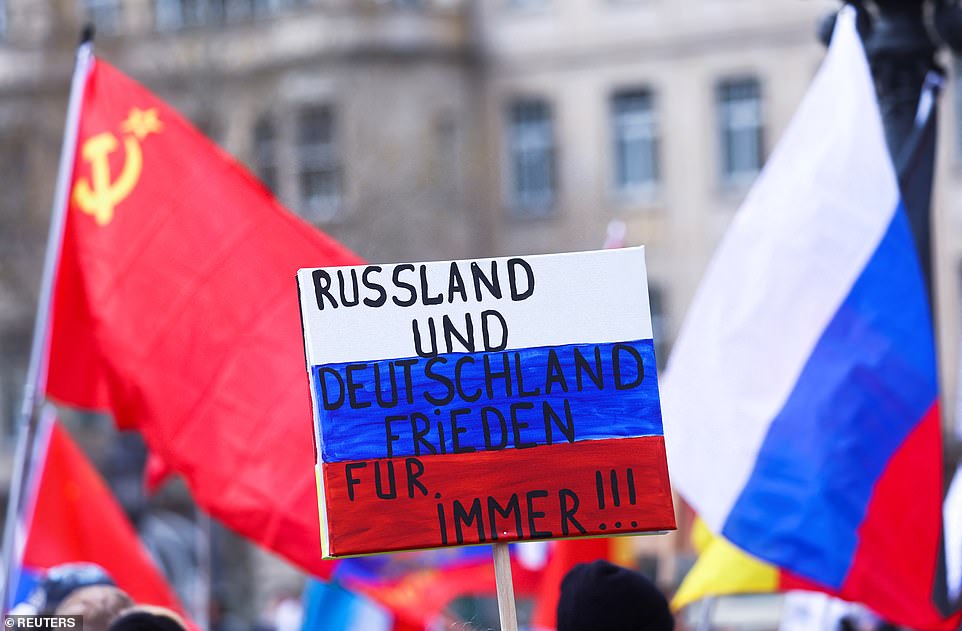 One home made banner carried the phrase ‘Russia and Germany peace for ever’, while others held large flags from the Soviet Union 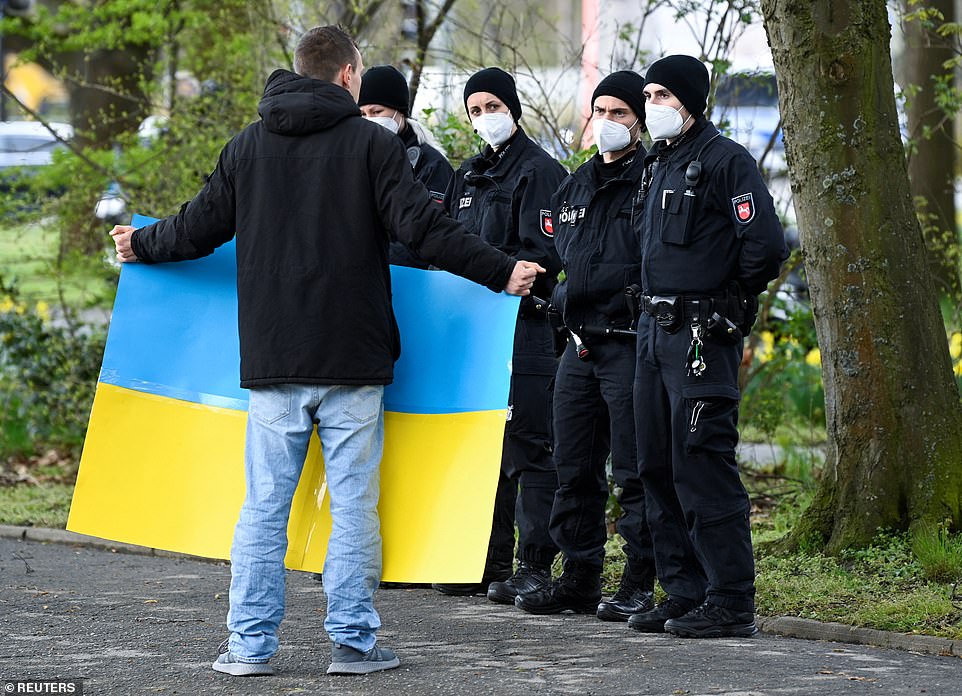 However, police had to keep groups of rival free protesters apart after a counter demonstration in support of Ukraine 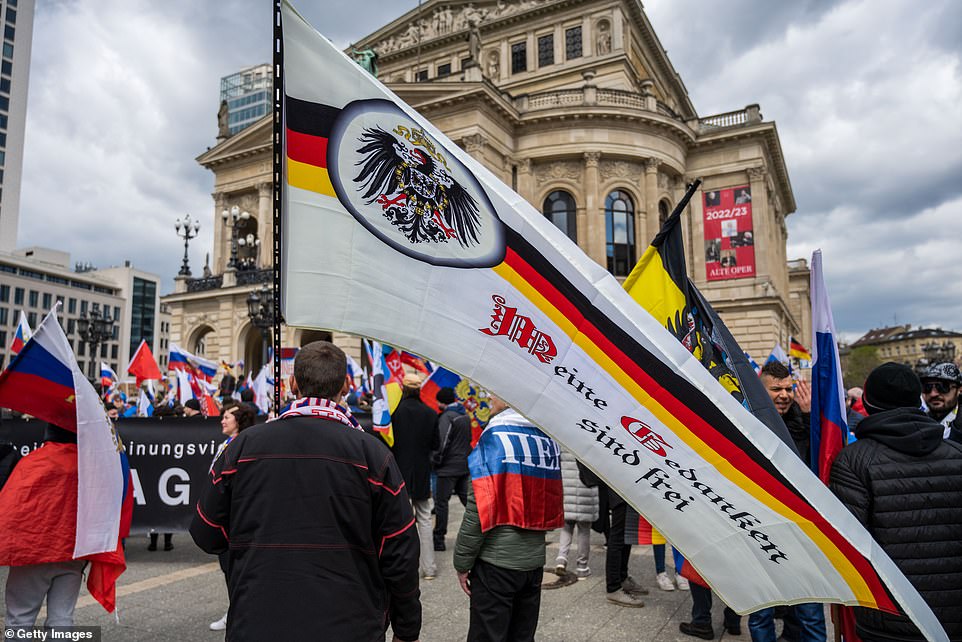 ‘We will not allow our fundamental right to gather and protest to be exploited for Russian war propaganda on German streets,’ Lower-Saxony’s interior minister Boris Pistorius told local media on Friday.

Russian President Vladimir Putin sent his troops into Ukraine on what he calls a ‘special military operation’ to demilitarise and ‘denazify’ Ukraine. Ukraine and the West say Putin launched an unprovoked war of aggression.

Since Russia’s invasion, members of Germany’s Russian immigrant community have faced abuse, intimidation and even damage to property.

Christian Freier, 40, who has both Russian and German citizenship said the website of his car repair shop has been hacked and his online ratings have plummeted.

The cyber action began shortly after he arranged a pro-Russian rally.

He said: ‘My life is hell. My aim was only to protest against the daily aggression suffered by Russians in Germany.’

Since Russia invaded Ukraine in February, 383 anti-Russian and 181 anti-Ukrainian crimes have been officially reported to German police.

Germany is home to around 1.2 million Russians and 325,000 Ukrainians, plus more than 316,000 who have arrived as refugees since the start of the conflict.

Rene Hermann, 50 said: ‘All war is awful and can never be justified.’

He has also been involved in organising pro-Russian rallies. His TikTok account has been suspended as it has been parroting pro-Putin propaganda.

Sociologist Jochen Toepfer said : ‘The motives for taking part in these demonstrations are very diverse.

‘They were organised as demonstrations against discrimination in Germany. But there were certainly also fans of (Russian President Vladimir) Putin, as well as people who don’t necessarily like Putin but don’t want to see their country discredited, despite the war.’