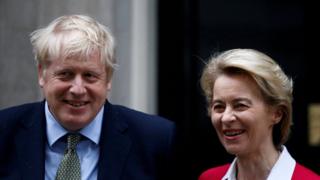 Psssst .. Over here! Lift the tarpaulin and dust down the jargon. Brexit is back on the political menu. Whether you voted for it or not, now is the time to start sitting up and listening again.

It starts with Monday’s online meeting between UK Prime Minister Boris Johnson and EU institution leaders (the president of the European Council, Commission and Parliament).

I know you’ve seen countless “make or break summits”, so many “deadlines” come and go, so many threats of “no deal” that came to nought.

So here is an attempt to try and help navigate what’s spin and what you should be looking out for. More insights – including deal-making tips from a professional hostage negotiator – in my podcast here.

First off, Brexit has, of course, “happened”. The UK left the EU at the end of January. But we’re not yet living the next chapter. The transition period we’re in means that, in practical terms, little has changed. The UK is still a member of the EU’s single market and customs union. The UK isn’t going it alone, just yet.

The EU and UK have until the end of this month – according to the Withdrawal Agreement, aka the Brexit divorce deal – to call for an extension to transition. But the UK government has long rejected the idea. On Friday, the EU publicly accepted that UK “no” as definitive.

So, there are six months left to negotiate, sign and seal the parameters of the UK’s future relationship with its biggest and closest trade partner.

Because without compromise – on both sides – there will be no trade deal come the end of this year.

That is why it’s worth keeping a closer eye on things again. The UK government promised a brighter future post-Brexit – a taking back of control over national borders, waters and immigration.

The next half-a-year is when we find out if it will keep those promises.

What compromises, if any, will the UK government make on its Brexit pledges in order to reach a trade deal with the EU and others?

And if the UK refuses to compromise, how might having no deal at all with the EU affect our lives?

Right now, EU-UK trade negotiations are at an impasse, because of political priorities both sides of the Channel.

The government rejects EU demands on competition regulations and fishing because, it says, they fail to respect the UK’s post Brexit national sovereignty.

The EU insists without agreement on fishing and competition rules, there’ll be no deal at all. It wants restrictions on the UK’s ability to slash costly environmental or labour regulations for example, in order to prevent UK businesses becoming more competitive than European ones in their own market. This, says the EU, is imperative to protect the “integrity” of the single market and what it calls “the European project”.

But political rhetoric aside, Boris Johnson and EU leaders want a deal. It makes economic sense. This doesn’t mean a deal is certain. But the UK isn’t walking away from talks this month either, as it once threatened to do.

Instead, after their meeting on Monday, the prime minister and the European Commission President Ursula von der Leyen are expected to announce a timetable of intensified negotiations this summer, including some face-to-face meetings (Covid-19 permitting) in a declared attempt to break the deadlock.

Prepare for the setting of more deadlines too. Plus dark mutterings from both sides (France’s Europe minister was already at it on Thursday) should these deadlines not be met.

The UK says a deal must become clear before the autumn to give businesses and workers the chance to prepare. Spoiler alert: a deal is extremely unlikely to materialise by then.

The EU insists 31 October is the latest date a deal can be reached, if it is to be ratified by the end of the year (the UK’s other deadline).

Spoiler alert Number 2: the late October date is also quite possibly not going to be met.

So, does this make no-deal now the most probable outcome?

Not necessarily. A deal is there to be done by December if both sides want one and if both are willing to make concessions. A compromise could be found on fishing, if, for example, EU coastal nations give up the dream of keeping the same quotas they had to fish in UK waters when the UK was an EU member. And if the UK accepts it can’t have the exact same fishing agreement Brussels has with much smaller Norway.

On competition rules – aka level playing-field regulations – the EU would need to give up its insistence that the UK mirror the bloc’s evolving state aid rules forever in to the future.

The UK concession could be to sign up to not weakening labour and environmental regulations below the current level.

But that is a political decision for the UK. The EU recognises that. And it’s really not sure which way the government will eventually jump. Much will depend, Brussels thinks, on whatever else is going on for Boris Johnson domestically, come the autumn.

Give up some sovereignty (as trade negotiators say all deals demand, to a greater or lesser extent) and come under fire from Brexit purists, or walk away, declaring that no deal was possible with the EU, and face an outcry from many in the business community and beyond.

It’s at this point in off-the-record chats that my EU contacts love to repeat the phrase they’ve so often directed at the UK since the 2016 referendum, that “you can’t have your cake and eat it”. Or as the EU’s chief negotiator Michel Barnier likes to say: “You can’t have the best of both worlds.” 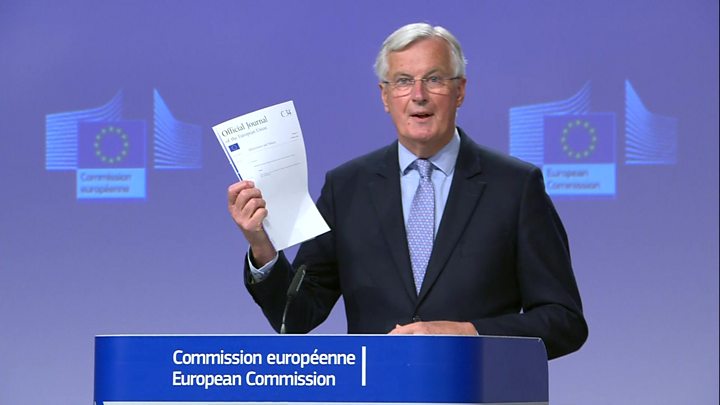 Whatever the next months may bring, negotiators from both sides privately acknowledge this summer is probably too early for big compromises.

The theory is that the “other side” would simply bank those summer compromises and demand more come the autumn.

And if they’re almost there but not quite, come November, the whispered wisdom in Brussels is that with all the “clever lawyers” in town, as they’re described to me, it should be possible to find a way of fudging an extension (though for political face-saving reasons, especially in the UK, not actually calling it an extension) for a limited period beyond the end of the year, if both sides want one, and only if they are very close indeed to sealing the deal.

After all my years EU-watching, I cannot imagine the bloc allowing a deal with close neighbour and ally UK to fall through over a deadline, if the UK government too were keen to keep talking.

But this is not an official topic of discussion in Brussels, never mind London, at this stage.

Meanwhile in Berlin, Paris, Rome and elsewhere, EU leaders are still very much focussed on Covid-19 and its fallout.

Yet another reason Brussels predicts the bartering and compromise possibilities will only become clearer come October, with the clock ticking down to the end of the year.