Residents along the coast of NSW are being warned to prepare for what could be life-threatening floods in coming hours and days, as the system lashing Queensland with torrential rain moves south.

With Greater Brisbane bracing on Sunday for thousands of homes to be inundated amid floods that have already killed six people in the state, there are now several major flood warnings in place in parts of north-eastern NSW, with Lismore, Grafton, Coffs Harbour, Woolgoolga, Sawtell and Dorrigo among the locations that could be impacted.

NSW Minister for Emergency Services and Resilience, Steph Cooke, said the risk of riverine and flash flooding “is very real over coming days” and implored residents not to be complacent.

Ms Cooke said she knows many of these communities “have seen [their] fair share of flooding” but urged them to heed warnings and get prepared now by packing basic essentials, in case of an evacuation order.

State Emergency Service Commissioner Carlene York said the current threat is different to other flood situations, in that the ground “right across NSW” is already saturated.

“There is nowhere for it to go,” she said. Added to that are simultaneous high tides, which “make it very difficult for rivers to flow out into the ocean.”

Ms Schofield said the current forecast for Lismore is for major flooding to occur, albeit below the level of the 2017 floods from ex-Tropical Cyclone Debbie when 700 millimetres of rain fell in the area, but stressed “the rain that we’ve seen in Queensland has been torrential, and that system is moving to NSW”.

The immediate threat is to the north-east of the state, with 150 millimetres expected and potential for up to 250 millimetres to fall in those parts Sunday and into Monday.

But coastal communities south of Sydney are being told to prepare to be hit with a similar torrent on Wednesday. 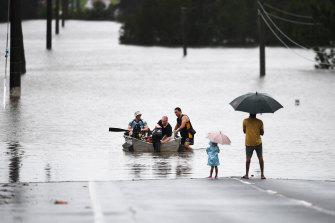 The system that led to floods in south-east Queensland will move south to the NSW coast this week.Credit:Getty

Ms York said now is the time for people further south to prepare their homes by securing loose items and clearing gutters.

NSW Premier Dominic Perrottet also stressed the message to “please get ready, please be prepared and please follow the instructions as they are issued”. He said there had already been 70 flood rescues since the wet weather began on Tuesday, with five in the last 24 hours.

Ms York said she did not want to see a tragedy in NSW like the death of a Queensland SES volunteer whose vehicle was swept away en route to a rescue on Friday night.

The Queensland death toll rose to six on Sunday when the body of a 34-year-old man was discovered in the Brisbane suburb of Indooroopilly after his car was submerged in floodwaters at 2.30am on Sunday. Fears are also held for another man who disappeared after falling into the Brisbane River.

In NSW earlier in the week, a man died after his 4WD vehicle entered floodwaters on the Central Coast, while Ms York said crews had recently had to rescue a bus.

Ms York said people driving larger vehicles often think they can get through floodwaters, “and that really risks their life and risks those volunteers who go out and save those people when they call for assistance”.

Ms Cooke said the government is “deeply grateful” to the 550 SES volunteers working in the north of the state, telling them “we know you are tired, but we need you to keep going”.

“If the community can respectfully pull together at this time, it will make the job of our volunteers just that little bit easier against really, really trying conditions”.