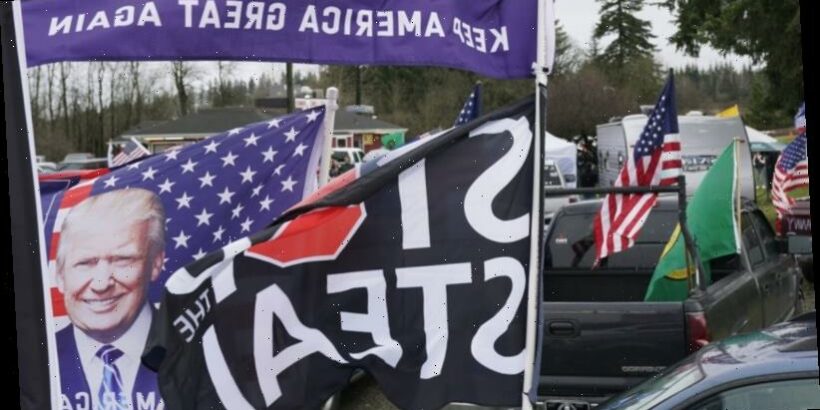 Washington: Bracing for possible violence, the nation's capital has mobilised the National Guard ahead of planned protests by President Donald Trump's supporters in connection with the congressional vote expected Wednesday to affirm Joe Biden's election victory.

Around 15,000 Trump supporters are expected to rally over Wednesday and Thursday AEDT, seeking to bolster the President's unproven claims of widespread voter fraud. “There are people intent on coming to our city armed,” DC Acting Police Chief Robert Contee said Tuesday AEDT. 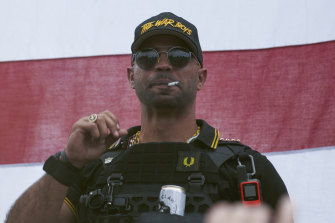 Proud Boys leader Enrique Tarrio was arrested when he arrived in Washington DC and charged over his role in the December protest. Credit:AP

A pro-Trump rally in December ended in violence as hundreds of Trump supporters, wearing the signature black and yellow of the Proud Boys faction, sought out confrontations with a collective of local activists attempting to bar them from Black Lives Matter Plaza near the White House.

The leader of the Proud Boys, Enrique Tarrio, was arrested by DC police on Tuesday AEDT on a warrant charging him with burning a Black Lives Matter banner taken from a historic Black church during a demonstration last December.

Police stopped a vehicle Tarrio had been in shortly after it entered the District, said Dustin Sternbeck, a DC police spokesman. He said it is believed that Tarrio, who lives in Miami, was coming into the District from the airport.

Sternbeck said Tarrio is charged with one misdemeanour count of destruction of property in connection with the December 12 burning of a banner stolen from Asbury United Methodist Church.

Lawyers for the church also filed a lawsuit against Tarrio and the Proud Boys over the destruction.

Tarrio had told The Washington Post last month that he was among those who burned the banner.

Police said Tarrio, who was in custody, was also charged with two felony counts of possession of high-capacity ammunition feeding devices, which is a legal term for a firearms magazine that allows guns to hold additional bullets. The devices were found during the arrest, police said.

Trump has repeatedly encouraged the protests and hinted that he may get personally involved. Over the weekend, he retweeted a promotion for the rally with the message, “I will be there. Historic Day!”

The protests coincide with the congressional vote on Thursday AEDT which is expected to certify the Electoral College results, which Trump continues to dispute without any evidence.

Election officials from both political parties, governors in key battleground states and Trump's former attorney general, William Barr, have said there was no widespread fraud in the election. Nearly all the legal challenges from Trump and his allies have been dismissed by judges, including two rejected by the Supreme Court.

Now with downtown DC businesses boarding up their windows, Mayor Muriel Bowser has requested a limited National Guard deployment to help bolster the Metropolitan Police Department. During a press conference on Tuesday AEDT, Bowser asked that local area residents stay away from downtown DC, and avoid confrontations with anyone who is “looking for a fight”. But, she warned, “we will not allow people to incite violence, intimidate our residents or cause destruction in our city”.

According to a US defence official, Bowser put in a request on New Year’s Eve to have Guard members on the streets from to help with the protests. The official said the additional forces will be used for traffic control and other assistance but they will not be armed or wearing body armour. Congress is meeting this week to certify the Electoral College results and Trump has refused to concede while whipping up support for protests.

DC police have posted signs throughout downtown warning that carrying any sort of firearm is illegal and Contee asked residents to warn authorities about anyone who might be armed.

There will be no active duty military troops in the city and the military will not be providing any aircraft or intelligence.

The National Park Service has received three separate applications for pro-Trump protests, with estimated maximum attendance at around 15,000 people, said Park Service spokesman Mike Litterst. On Tuesday, a stage was being assembled for one of the protests on The Ellipse, just south of the White House.

Organisers plan to rally on Wednesday AEDT at Freedom Plaza and again the next day on the Ellipse, including a march to the Capitol around 5am Thursday AEDT. Expected attendees include high-level Trump supporters such as Texas Attorney General Ken Paxton and Republican strategist Roger Stone, a longtime Trump devotee whose three-year prison sentence for lying to Congress about Russian interference was commuted by Trump.