“If you collect rubbish and ship it to China that’s not recycling, that’s just collecting.”

Dr Karl Williams, head of the centre for waste and resource management at the University of Central Lancashire, says he’s looked at a lot of rubbish in his career. 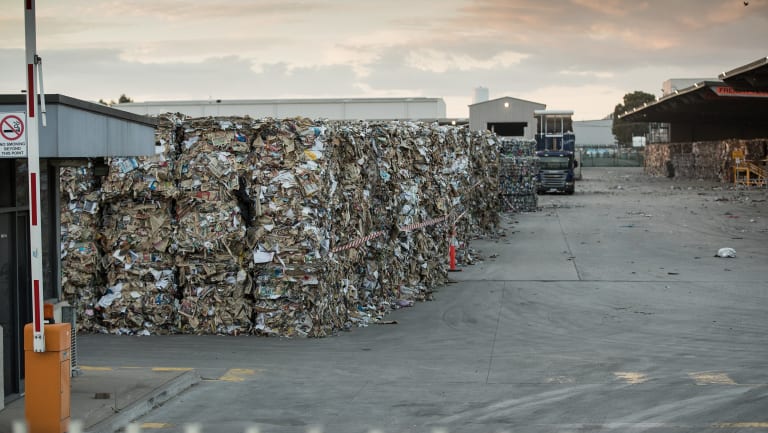 China’s ban has caused a glut of recyclable waste in Australia.

And though Europe is going through its own crisis at the moment, like Australia, he suspects that the difference between the two territories is that Europe has a better class of trash.

On January 1, China imposed a ban on the importation of lower-grade waste such as plastic scraps or mixed, unsorted paper. The ban hit Australia hard, with companies walking away from waste collection contracts, and recycling being stockpiled by councils who could not find anywhere to send it.

Europe has not escaped either. The European Union champions the “circular economy” and likes to boast that its energy and resources are carefully reused and recycled. But the circle is far from complete. Only 40 per cent of the continent’s waste is reused or recycled, and it sends millions of tonnes of paper and plastics overseas. In 2016, of the 8.4 million tonnes of plastic waste the EU collected, almost one-fifth ended up in China.

When China imposed new limits on foreign waste imports at the beginning of the year, the system clogged up. Pascal Gennevieve, head of paper at French recycler Federec, told Politico in February that, “Right after the Christmas peak we had a lot of paper and no export solution. All European plants are full, saturated.”

There was a scramble across the continent, Dr Williams says.

“It had an impact. [Recycling] companies initially looked at whether they could just ship [the waste] somewhere else. As with any company, if you lose a part of your market you need to find another buyer quickly," he says. “But a lot of companies are using it as an opportunity to adapt.”

Dr Williams can see two big differences between Europe and Australia. Firstly, Europe has invested heavily in both the quantity and quality of processing plants, where waste is turned into new products. And secondly it does better at separating waste, so its recycling product is “high grade”, which is more popular with domestic and international buyers.

He’s the first to admit the system isn’t perfect. Waste collection in Britain is down to local authorities, and there’s no central guidance from government apart from vague instructions to make sure they recycle. Dr Williams lives in one council district and works in another, and the two have entirely different waste collection systems – different-coloured bins, different instructions on what goes where. It confuses people.

“At the moment we don’t really have a high recycling rate [in Britain],” Dr Williams says. “But we do have capacity [to process it]. 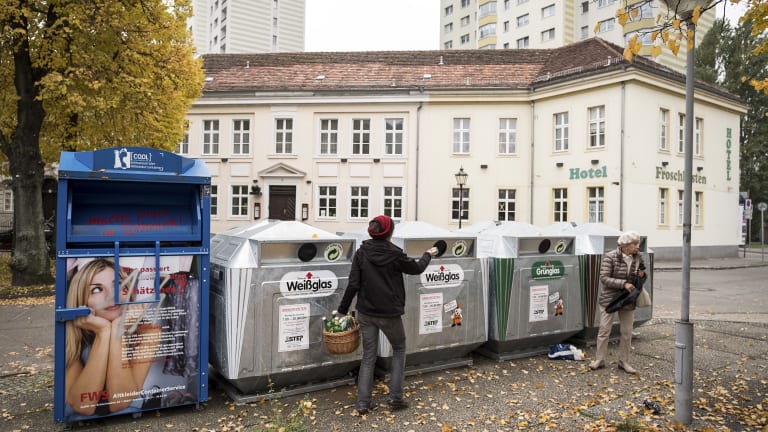 Recycling bins for clear and coloured glass in Potsdam, Germany. Germany sorts 65 per cent of its waste into colour-coded bins: blue for paper, yellow for plastic, brown for composting and black for general waste.

“That’s what makes Europe more adaptable – it has invested the money into waste management strategies and policy and recycling. They’re not just collecting it, they’re looking at what you do with it once you collect it, which is the really important thing.”

For that, you can probably thank the Scandinavians and the Germans. Their societies and governments have been focused on the environment for longer and with more commitment than others.

It’s also partly thanks to the climate. Countries such as Denmark or Sweden need a lot of heat and energy, so a lot of low-grade plastic waste ends up as “refuse-derived fuel”. 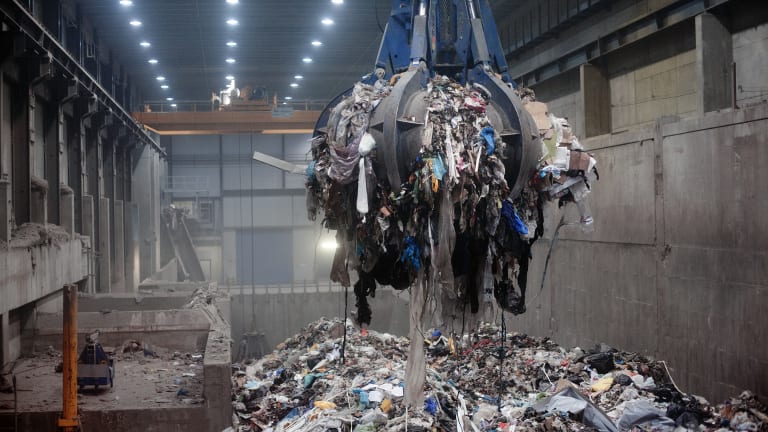 Trash piled nine metres high awaits incineration inside the waste-to-energy agency plant in the Norwegian capital Oslo, where roughly half the city and most of its schools are heated by burning garbage.

Germany and its northern neighbours carry a lot of weight in the corridors of Brussels, so they can impose regulations on the rest of the EU which are aimed at reducing waste and increasing recycling. There’s a big push at the moment to reduce single-use packaging in supermarkets – most of the stuff that goes into household bins.

Countries in the less well-off, less environmentally focused corners of Europe come along for the ride. They fall under the same EU directives and are given dispensations and funding to help them catch up, to move away from landfill and towards recycling. There’s still a way to go, and a big disparity between nations.

Indeed, some parts of Europe are famously bad at dealing with garbage. Naples regularly hits the headlines when rubbish starts piling up in the streets (or the mafia dump toxic waste in the city’s outskirts). And Rome’s bins overflowed earlier this year when inept local authorities ran out of places to send their waste. 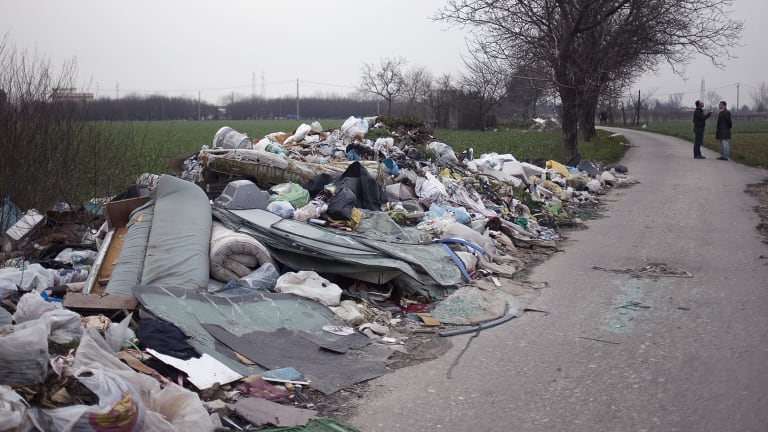 Environmental activists Leopoldo Esposito and Ciro Tufano survey farmland littered with a mix of household and industrial waste near Marigliano, north of Naples in Italy, in 2014.

But Rome is also an example of how the system does work: a 2017 crisis was eased via a deal where Rome sent 70,000 tonnes of household refuse almost 1000 kilometres north by train, where it was incinerated into gas that powered turbines that supplied electricity to 170,000 homes in Lower Austria.

The EU has gradually tightened its requirements on member states over time. In 1975 the EU introduced a “waste hierarchy” that prioritised prevention over reuse, reuse over recycling, then recovery (such as producing heat or electricity from waste), with disposal at the bottom of the pile.

It was an optional rule for a while, but in 1999 the EU introduced a landfill directive, cracking down on what countries were allowed to bury. Then in 2008 another directive set an objective that 50 per cent of all municipal waste was to be recycled or composted by 2020.

At the beginning of this year the European Commission announced a “plastics strategy”, under which all plastic packaging would be recyclable or reusable by 2030. It is also considering a new tax on “virgin” plastics to make recycled plastics more competitive. 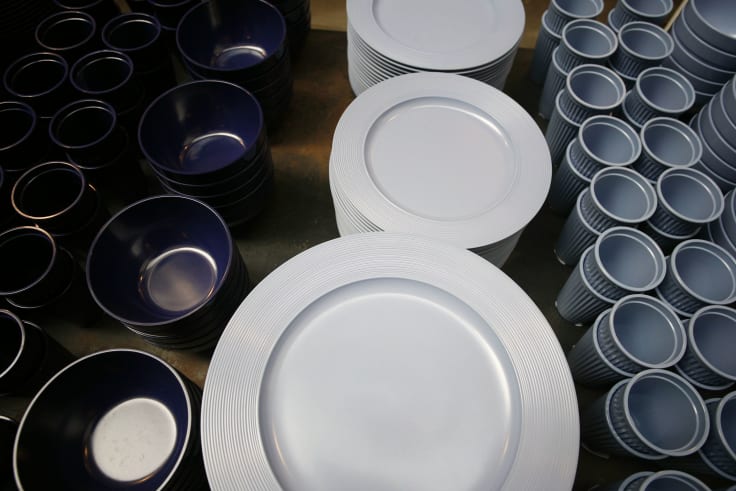 Biodegradable plastic dinner plates and cups on display at Merci, a concept shop in Paris.

The changes will require Europe’s capacity to sort and recycle waste to increase fourfold – at an estimated cost of €16.6 billion ($26.4 billion), Politico reported.

In Britain, recycling rates were rising rapidly until recently but have stalled because of a lack of the kind of plants that can process flexible plastic packaging such as plastic bags, lolly wrappers or frozen food bags. It will cost an estimated £120 million ($217 million) to set them up: hardly pocket change.

There are also holes in the system. A European Commission report published earlier this year found that more than 3 million cars each year went “missing” rather than being recycled. EU rules require 85 per cent of a car’s weight to be recycled when it is trashed, as well as it being stripped of all hazardous substances. But millions of vehicles are being illegally exported or illegally dismantled instead.

Others warn of the law of unintended consequences. A one-eyed focus on eliminating plastic packaging in supermarkets, for example, can reduce shelf life and result in much greater food waste, Peter Maddox from waste advisers WRAP UK warned.

In the meantime, there will have to be short-term solutions. One, Dr Williams admits, sounds familiar. “Europe is also looking at opening up other markets [to sell waste to], other South-east Asian countries. They’re looking at Vietnam, places like that, which have less strict waste management.”