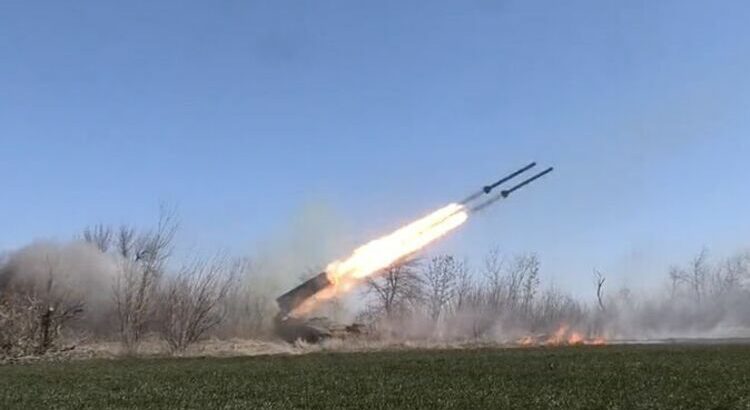 Disturbing footage has been released by Russian propagandists and separatist forces showing its troops firing thermobaric weapons that can melt human organs. Videos showed a succession of the horrifying missiles fired into the air from a Solntsepek 24-barrel multiple rocket launcher. Eliot Higgins, from the investigative journalism group Bellingcat, tweeted that the TOS-1A ‘Flamethrower’ thermobaric rockets were fired near Mariupol, which has endured constant bombardment from Russian forces.

An initial clip appeared on Russian state media’s Russia Today which showed the thermobaric rockets in action for the first time, following claims of their use in the Ukraine war.

In the clip, soldiers can be seen loading the powerful missiles into the launcher while orchestral music plays in the background.

The military launcher vehicle then rolls into position on the edge of a field before the jets are ignited and the missiles are launched.

The large rocket launcher can be seen firing 11 times in quick succession, as fire blasts out the back, causing a cloud of thick smoke to rise up.

The Russian thermobaric missiles explode at a much higher temperature than most conventional weapons.

The weapons are known to ‘melt’ enemy targets with a capacity to vaporise human bodies.

The blast sucks in oxygen from the surrounding air to generate a high-temperature explosion.

The vacuum that follows the blast is understood to be strong enough to rupture organs and cause massive internal damage.

Mr Higgins from Bellingcat tweeted: “We have three videos in this thread that appear to show the same TOS-1A near Mariupol.

“I believe it could be possible to geolocate the exact launch site and narrow down exactly what it was firing at.”

Moscow defence sources claimed: “The TOS-1A Solntsepek was used against Ukrainian nationalists by the people’s militia of the Donetsk People’s Republic with the support of the Russian army during a special operation in Ukraine.”

Sebastian Roblin, a military expert, told 19fortyfive.com: “A TOS-1 rocket barrage will wipe out everything within the 200-by-300m blast zone.”

Last week, Britain’s Ministry of Defence (MoD) said that Russia’s own MoD had confirmed the use of thermobaric rockets.

At the onset of the conflict, the British MoD tweeted: “The Russian MoD has confirmed the use of the TOS-1A weapon system in Ukraine.

The use of thermobaric rockets is a sign of escalating military tactics from the Russians, as their ground invasion largely stalls.

Earlier this week, Russia fired hypersonic missiles from Crimean airspace in a world-first during military conflict.