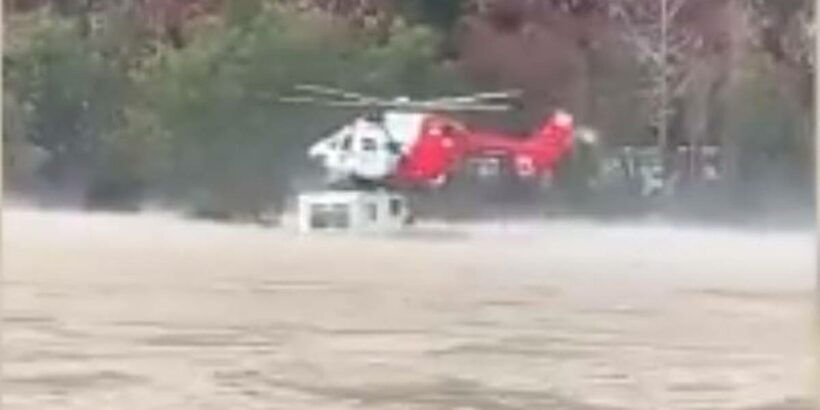 A rescue helicopter has been filmed rescuing people from a campervan caught in floods in the South Island.

The footage posted to Twitter shows the helicopter hovering over a camper that appears to be swamped by fast-running floodwaters.

The waters appeared to have risen higher than the campervan’s bonnet and were nearly as high as its roof.

A caption to the video said it was caught by floodwaters from the Motueka River, which
appeared to have burst its banks.

The helicopter can be seen descending almost to the height of the camper, where it looked like at least two people were sheltering on the vehicle’s roof.

The helicopter hovers for close to one minute before it gets close enough for the people to either climb aboard or cling to its undercarriage, at which point the chopper is able to fly away and the video cuts out.

It comes amid reports of three motorists being rescued from their cars after they were trapped by floodwaters triggered by wild weather battering the South Island.

That included a front-loader and helicopter being called to rescue people stranded on the roofs of their vehicles, a Fire and Emergency spokesperson said.

Elsewhere, residents are being told to evacuate.

The Marlborough District Council advised residents of the Lower Terrace in Renwick to evacuate their properties and stay with family or friends for the next 24 hours, as the stop bank at Conders Bend is beginning to overtop.

Meanwhile, Bartlett’s Creek bridge, 20km up Northbank Rd from Renwick, has been washed out so access to the Northbank area west of SH6 is now not possible.

About 25 rural properties there are cut off.

Westport and Nelson have been left isolated as high river levels, flooding, fallen trees and slips close state highways across the top of the South Island, RNZ reports.

The rare “red warning” urging West Coast residents to brace for wild weather has been extended for an additional seven hours as the region deals with flooding, slips, mass evacuations and major road closures.