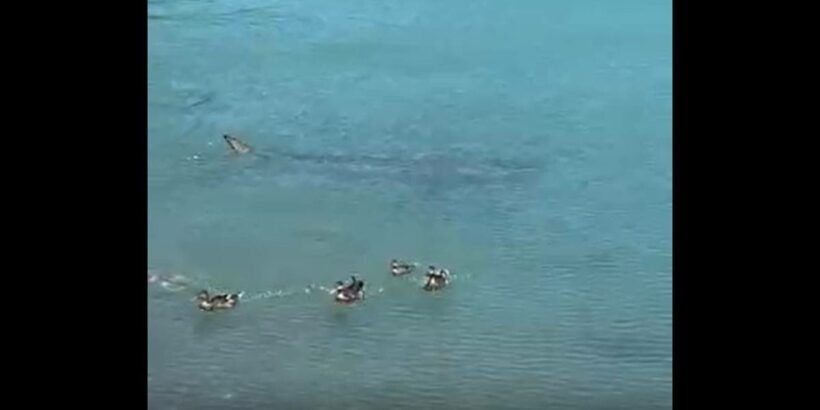 A shark has been filmed swimming near the shore off Waiheke Island.

A local resident filmed what appears to be a medium-size bronze whaler, about two metres long, near Matiatia wharf.

In the video the shark can be seen swimming under a team of ducks and ducklings, which scatter quickly as the apex predator approaches.

The sighting continues a busy summer for shark spotters.

Swimmers at an East Auckland beach Sunday were warned to take care after sharks were spotted, and another shark warning is in place at an Auckland west coast beach.

Last month, 19-year-old Kaelah Marlow died after apparently being attacked by a shark at Waihī Beach in the Bay of Plenty.

Marine scientist and shark researcher Riley Elliott told RNZ the increased number of sightings is not surprising, despite their populations declining.

He said there are far fewer sharks than previously, but a lot more people are going into the water than before.

“We cannot blame sharks for us encountering them more, we can only blame ourselves, we can only educate ourselves and we can only understand the environments that we go into and accept the risk if we’re going to go into them.”

But Elliot said every tragedy as a result of a shark needs to be investigated so we can learn from our mistakes.

A major international report in the journal Nature a few weeks ago indicated that worldwide shark numbers have declined 70 per cent over the past 50 years because of an 18-fold increase in fishing pressure, he said.

“That is absolute scientific fact, so we have only 30 per cent of the world’s sharks left and that is a huge decline.”

Elliot said many reports in the media or from fishers are personal observations.

“I’m looking at a couple here right in front of me saying ‘because we stopped shark finning there’s sharks everywhere’. That’s personal observation.”