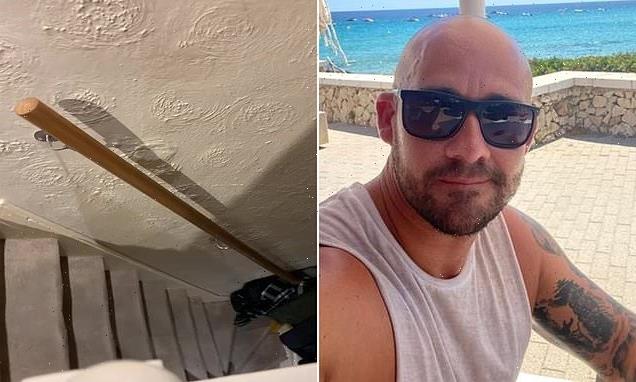 A father captured the moment his neighbour called him a ‘bald cellulite-ridden small-testicled w****r’ after ‘spurned her advances’.

Matthew Grist claims he’d tried to be friendly by lending his hammer to the lady moving in next door in Maidstone, Kent, but ‘realised she had a crush on him’ when she wrote on Facebook she’d ‘date him if he was single’.

The 38-year-old alleges his neighbour mistakenly believed ‘he fancied her too’ and began asking for guitar lessons, then turned up at his door with a bottle of whisky after quizzing him on his favourite tipple.

But Mr Grist claims when he ‘failed to reciprocate her advances’, the neighbour claim began ‘terrorising’ him and fiancee Zoe Broster with barrages of abuse through their walls and over their garden fence. 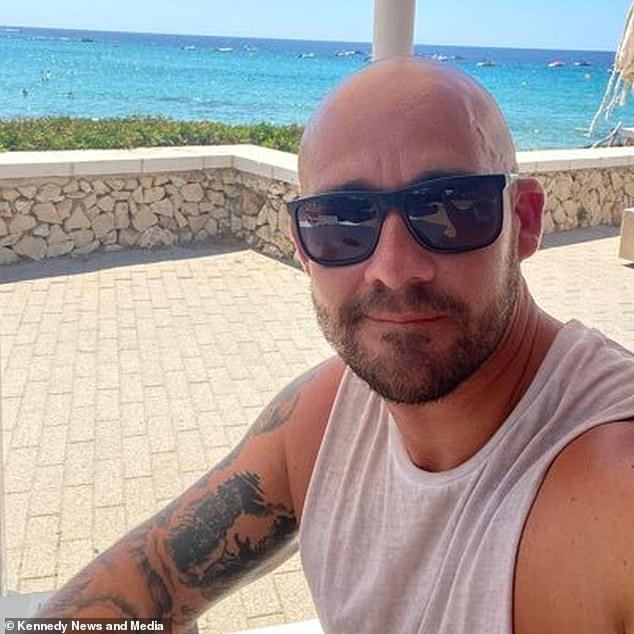 Matthew Grist, pictured, says his neighbour was initially friendly after she moved in next door to their house in Maidstone, Kent, last summer

In footage Mr Grist posted to Twitter, the scorned ‘neighbour from hell’ can be heard shouting ‘you go to my garden and beg to see me. I don’t fancy you’, through the wall.

She then launches into a foul-mouthed rant about the pair, labelling 27-year-old Ms Broster a ‘jealous sl*t’ and Mr Grist a ‘bald cellulite-ridden small-testicled w****r’.

The middle-aged woman declares ‘everyone hates you’ and the parents ‘don’t deserve children’, as the victims laugh nervously.

Mr Grist claims the ordeal has left him ‘scared to stand in his own garden’ and has even sped up their decision to move home while forcing them to consider applying for a restraining order.

The pair contacted Kent Police last month, but claim they feel ‘let down’ because nobody has visited their neighbour to warn her about her abusive behaviour.

Despite Mr Grist’s footage capturing the alleged abuse, Kent Police confirmed there was ‘insufficient evidence of a criminal offence’ and said he would have to report further incidents for it to be classed as harassment. 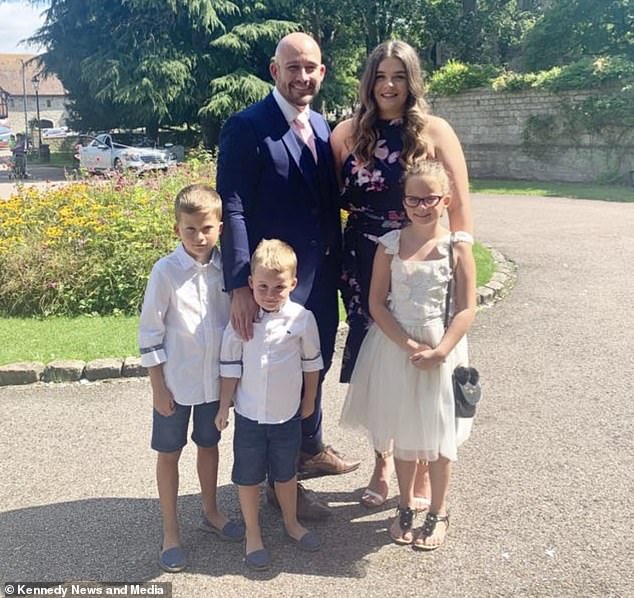 Mr Grist says the issue is taking its toll on his family. He is pictured here with fiancee Zoe Broster and his children, 11-year-old Katie (right), 10-year-old James (left) and seven-year-old Thomas (centre)

Mr Grist said: ‘Maybe she’s not happy that I’m not interested in her. This has to stop, because I’ve had enough. We shouldn’t be scared to live in our own house.

Mr Grist says he first thought the woman was ‘strange’ when she burned all her garden fences behind her house shortly after moving in in April last year.

Then the dad-of-three claims he spotted a Facebook post from his nightmare neighbour claiming she’d ‘happily date him if he was single’ after he’d lent her his hammer.

Her ‘cordial’ advances in the weeks after gave him and Zoe the impression she’d ‘taken a shine to him’ and they joked about it until she ‘turned’ in summer 2021 and became abusive.

Mr Grist, whose three children are Katie, 11, James, 10, and Thomas, seven, says the first incident came when the woman was ‘dancing around her garden’ while shouting ‘Zoe’s a fat cow’.

He claims the woman, who is believed to own her house, throws garden waste and even chicken bones into the garden, which are dangerous for their dog.

‘We just would really like the police to tell her to pack it in,’ he said. 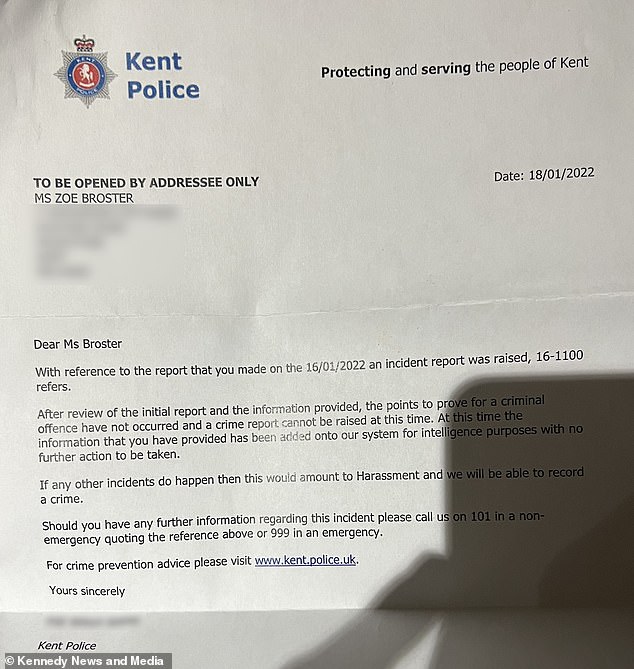 Mr Grist says the family have contacted Kent Police, but it has responded by saying ‘the points to prove for  criminal offence have not occurred’. Pictured is the letter sent by Kent Police to the family

The 38-year-old has complained about the abuse, but says he is disappointed that Kent Police have not spoken to his neighbour to tell her to stop

‘We just don’t want her to shout abuse through our walls all of the time and do very strange things.’

The couple contacted the police about the abuse last month and received a letter on January 16 telling him ‘the points to prove for a criminal offence have not occured’.

It says they would only be able to record it as a crime ‘if other incidents happen’, as that would amount to harassment.

Mr Grist claims he’s complained to the police about their inactivity.

The family plan to move house within the next few months and Mr Grist admits he feels sorry for the next tenants in case she ‘takes a dislike to them too’.

A Kent Police spokesperson said: ‘Kent Police was called on 16 January 2022 by a resident in Maidstone who reported they had heard offensive language coming from a neighbouring property.

‘Officers contacted the informant and it was identified there was insufficient evidence of a criminal offence.

‘They were also advised any further incidents could amount to harassment and should be reported. No further reports have been received by Kent Police at this stage.’

Mr Grist’s neighbour was contacted for comment but failed to respond.