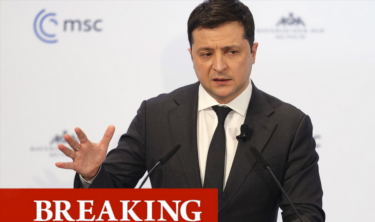 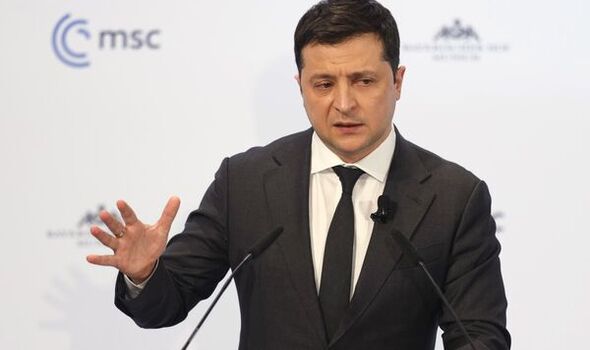 Volodymyr Zelensky, 44, claimed he tried to contact Vladimir Putin, 69, after Russia recognised the independence of two regions in east Ukraine.

However, Mr Zelensky revealed the Russian President refused to respond.

He said: “Today I initiated a phone call with the President of the Russian Federation.

“The result was silence, though the silence should be in the Donbas.”

Mr Zelensky went on to issue a plea to the Russian people and warned steps taken by Mr Putin could lead to the “beginning of a big war”.

He said: “We are separated by more than 2000km of mutual borders, along which 200,000 of your soldiers and 1,000 armoured vehicles are standing.
“Your leadership has approved their step forward onto the territory of another country.

“This step could become the beginning of a big war.”

In an attempt to counter the narrative put forward by the Kremlin, the Ukrainian President went on to tell Russia’s 144million residents that Kiev does not desire conflict.

He said: “You are told that this flame will liberate the people of Ukraine, but the Ukrainian people are free.

“You are told we hate Russian culture. How can one hate a culture?”

“But if we are attacked, if someone attempts to take away our land, our freedom, our lives, the lives of our children, we will defend ourselves.

“We won’t attack, but defend ourselves.

“By attacking, you will see our faces, not our backs, but our faces.”

Mr Zelensky appeared to concede his speech would not be shown to the Russian people through state television.

However, he explained: “The people of Russia need to see it.

“They need to know the truth.

“Do Russians want war? I would very much like to answer this question.

“But the answer depends only on you — the citizens of the Russian Federation.”