Our team is dedicated to finding and telling you more about the products and deals we love. If you love them too and decide to purchase through the links below, we may receive a commission. Pricing and availability are subject to change.

As a society, we’re constantly bombarded with images of celebrities, models and politicians with perfect, photo-ready teeth, which in turn makes us want those same megawatt smiles. Of course, in an age when the general public is much more woke to the notion that “perfect” is often engineered — through Photoshop, FaceTune or an expensive medical professional — this may not be what everyone strives for. Plus, it’s probably unattainable anyway.

With that being said, though, I’ve always been someone who wanted a whiter smile. While it could’ve been a case of noticing my flaws more than others do, I would look in the mirror and notice my slightly yellowed teeth, wishing they were less dull and brighter. Pearly whites they were not.

My usual dental care is fairly normal: brushing and flossing twice a day, using mouthwash at night and an average of two visits to the dentist every year. What doesn’t help my case, though, are the 2+ cups of iced coffee that I drink every day, in addition to my proclivity for drinking tea during the winter months, both of which are proven to stain your teeth.

So, when Colgate hooked me up with its newest at-home whitening system, the Colgate Optic White Advanced LED Whitening Treatment, I was eager to test it out and see if it could help reverse some of the natural discoloring that had occurred in my teeth over the years.

The product, which is said to be an at-home version of a professional whitening treatment, claimed to whiten teeth by six shades after just 10 days of use, so I figured: Why not give it a go?

Colgate Optic White’s whitening treatment involves putting two vials of whitening gel onto an LED light device that you place in your mouth for ten minutes each day. It helpfully beeps at the five-minute mark to let you know that you’re halfway through your treatment for the day in addition to beeping after 10 minutes to let you know that you’re done.

As tracked in the video at the top of the page, while some aspects of the process required some getting used to, I found the overall treatment to be relatively seamless and straightforward: I got used to applying the gels to the device (which instructions recommended you charge for four hours before each day’s use) and cleaning it was a cinch (just run it under the faucet to get the excess gel out and pat dry). Slight TMI warning, though: My mouth definitely got a bit “drooly” when taking the device out each day.

One of my biggest worries with the Advanced LED Whitening Treatment was that the gel would taste bad, making it difficult to keep the device in my mouth for the 10-minute duration of the treatments, but that wasn’t the case. While you’re not supposed to swallow any of the gel, its taste, while not great, was totally manageable.

The other major concern I had going into my whitening treatment was that it would make my teeth more sensitive. I heard general stories from friends and colleagues who used competing whitening products like Crest White Strips in the past who complained that their tooth enamel had been worn down, making their mouths uncomfortably sensitive. This was definitely not my experience using the Colgate Optic White Advanced LED Whitening Treatment, as my teeth seemed to have the same level of sensitivity as before I started using it.

Now, for the most important part: Did the 10-day treatment actually whiten my teeth? The short answer is yes. The longer answer is not as much as promised, but I’d have faith that, with continued use, they would get there. 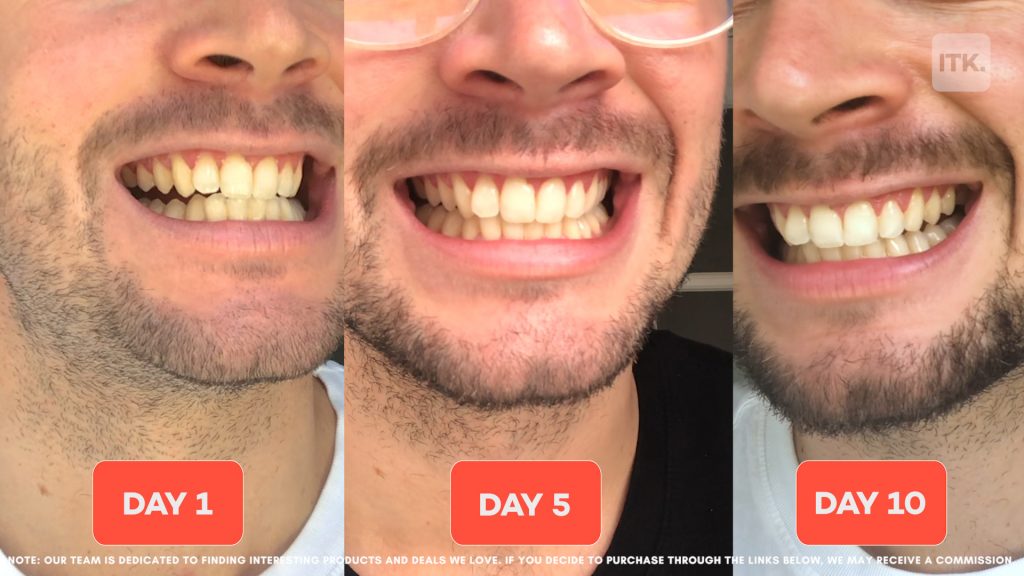 It was tough to tell in real-time whether or not my smile was getting brighter and my teeth were getting whiter, but a simple side-by-side comparison proved that they were. As you can see in the photo above, my teeth were whiter by the tenth day of me using the Colgate Optic White Advanced LED Whitening Treatment, and I would certainly consider getting another round of 20 vials of whitening gel (two per day for 10 days) to continue the process. 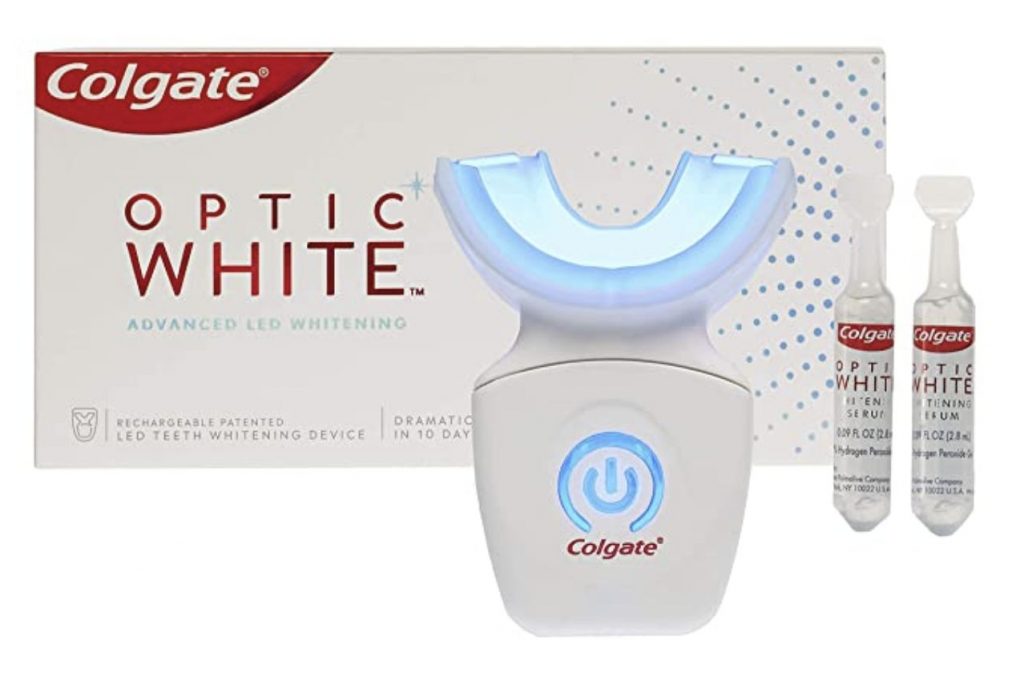 Judging by the product’s 4-star review average on Amazon, consumers are generally in agreement with my assessment of the whitening kit, with one reviewer calling it a “good whitening option,” while noting that it “doesn’t whiten as good as pictures but still helped a little. The taste of the gel is not bad. It does not cause teeth sensitivity.”

Another five-star reviewer also looked forward to continued use for more improvement: “My teeth have many, many years of yellowing and after using for the full 10 days, they are lighter. I need to use it again to get more results.”

As for the negative reviews, some customers were dissatisfied with the LED device itself, saying the one they ordered was “defective,” wouldn’t turn on or stay charged. While their testimonials are certainly valid, this isn’t something that I experienced at all — my device functioned as advertised.

If you enjoyed this article, you may also like reading about In The Know’s recent review of Gabrielle Union’s new haircare line.

More from In The Know:

The post We tried Colgate’s latest teeth whitening device that claims to whiten teeth by 6 shades in 10 days appeared first on In The Know.