Denpasar: Sean Garlick counts himself as one of the fortunate ones.

On the night of October 12, 2002, the former rugby league player was out to dinner in Bali with his ex-Sydney Roosters teammate Craig Salvatori, their wives and a group of 18 others. Most kicked on to the Sari Club, at the heart of the Kuta tourist precinct. Eleven of them would never make it back. 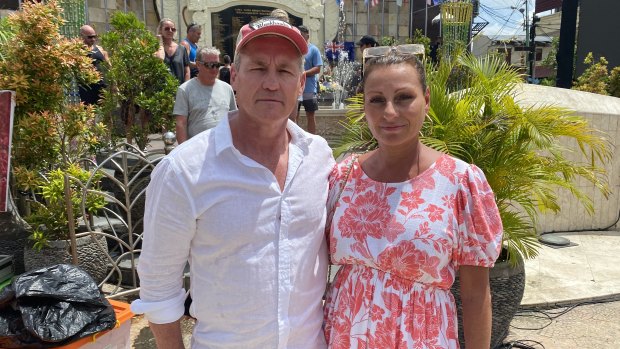 Sean and Samantha Garlick in front of the Bali bombings memorial on Wednesday.Credit:Chris Barrett

“Out of our group, all but Craig Salvatori, myself and a few of the men, and my wife [Samantha], went to the Sari Club,” Garlick said.

“She was supposed to catch up later with her best friend, Salvo’s wife Kathy, and the bomb went off before she got back.”

Garlick and Salvatori searched through bodies the next day and eventually learnt that Kathy had been among those killed, as had Samantha’s aunt and uncle Gerardine and Stephen Buchan and several other friends.

Twenty years later, as hundreds of relatives and friends of victims and survivors marked the anniversary of the Bali bombings on Wednesday, the Garlicks were back in Bali, as was Salvatori and Kathy’s two daughters Olivia and Eliza, his now wife Susie and other family members. 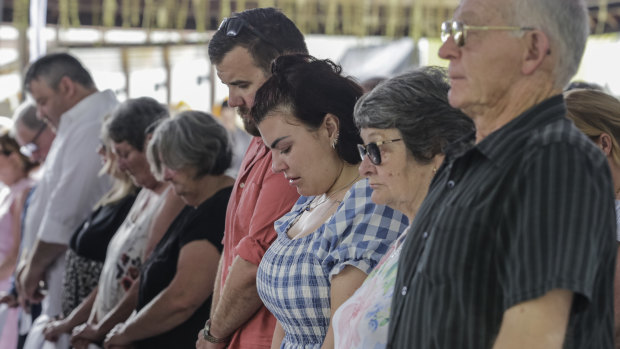 Relatives of victims and survivors attend a memorial service at the Australian consulate-general in Denpasar.Credit:Johannes Christo

“We came back for the 10th anniversary. [This year] we’ve brought the whole family,” Garlick said. “It’s been good to explain to them, now that our kids are older, where everything was. We were just so lucky on that night ourselves.”

A steady stream of people stopped to remember the 202 lives lost in the attack, including 88 Australians, at the Bali bombings monument throughout the day, placing flowers and laying wreaths at the memorial, where the names of those who perished are displayed beneath their nationality.

Afterwards, some dropped into the cafe across the road – and two doors down from where the Sari Club once stood – to cool off in the heat and reflect over a bottle of Bintang beer.

One of the largest contingents was family and friends of the 27 players and spectators from a rugby tournament played that weekend including members of teams from Jakarta, Singapore, Hong Kong and Taiwan. 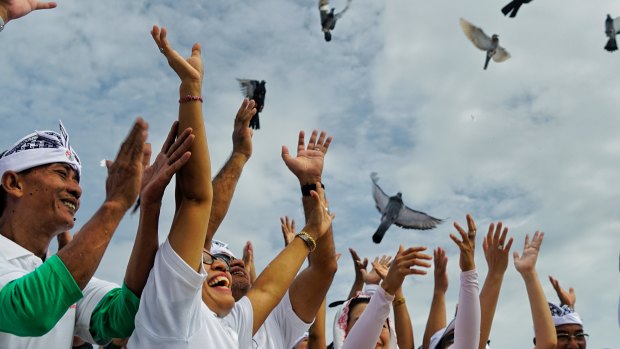 Doves are released during a ceremony at a beach at Nusa Dua.Credit:Amilia Rosa

“We hold a rugby tournament here every year, the Bali 10s, and at that tournament, on the Sunday, we always have a minute’s silence,” said Bali-based Welshman Clive Thomas.

It wasn’t just those who lost loved ones who paid their respects.

Bali is heaving with Australians again after the worst of the pandemic and holidaymakers also ventured in great numbers to the memorial on Wednesday.

“We’re here because we care,” said Aileen Collins of Launceston, who shed a tear after she placed flowers below the honour board with her husband Phil. “It does affect me. You think about all these beautiful people, It’s a bit like a war isn’t it?” 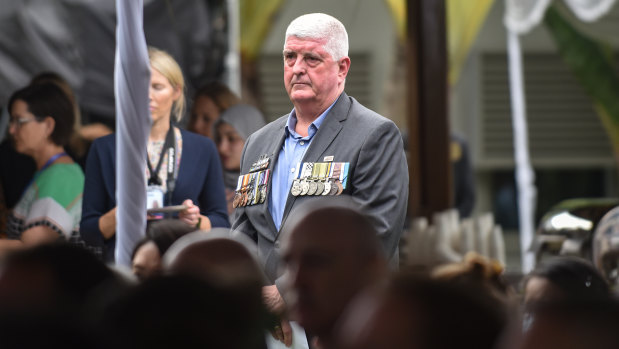 Earlier, hundreds attended an emotional commemoration service in the grounds of the Australian consulate-general in Denpasar.

Assistant Foreign Minister Tim Watts represented the Australian government and told the gathering the terror attack had brought Australia and Indonesia “closer than ever, bound by a common grief”.

The on-scene coordinator for victim identification in the three weeks after the blasts, Travers said he had been in the AFP for 20 years when he was flown to Bali on the day after the attack “but had never experienced a tragedy on this scale”.

Two decades on, though, he also remarked on the legacy of the cooperation that took place following the bombings.

“This is a beautiful island with wonderful people and it should always be remembered as much,” he said.

The anniversary was also recognised with the release of baby turtles and doves at a beach at Nusa Dua, where Balinese families of victims came together, and with ceremonies at the sites of the explosions.

Thirty-eight Indonesians died in the bombings, the second most of any country.

“Today, 20 years on, it feels different. It feels better,” said Ni Luh Erniati, whose husband Gede Badrawan was the head waiter at the Sari Club and was killed.

“Releasing the baby turtles, and the doves bring a sense of relief. It’s [symbolic], releasing the darkness for the past 20 years towards peace.”

Raden Laksono Priyono, whose wife Lilis Puspita was among the dead 20 years ago, was also there.

“I am fine today. I have to be fine, for my children,” he said. “If I am not fine, my children will be affected. I’ve been given a second chance in life.”