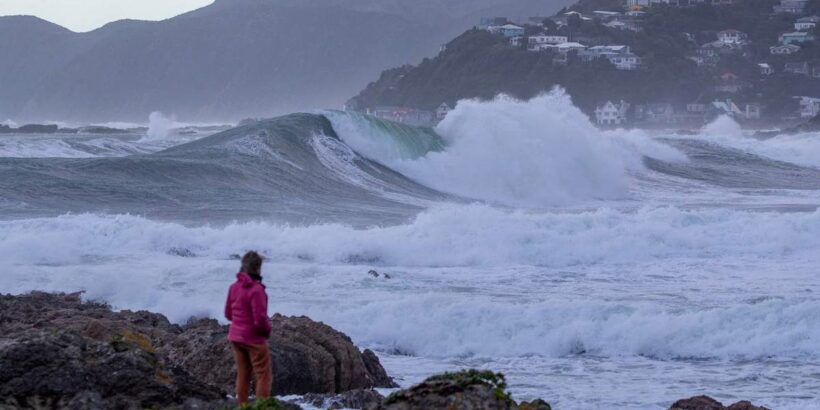 WEATHER LATEST
* Snow, heavy seas, freezing temperatures as polar blast sweeps north
* State of emergency declared in Wellington with waves of up to 6.5m overnight
* High tide is due to hit affected bays on the capital’s south coast at 9.22am
* Auckland endures one of coldest nights of years, temperatures plunge to 1C
* Desert Rd closed by snow, icy conditions across state highway network in South Island
* Cook Strait ferries, some flights cancelled

Emergency officials are now meeting to assess any overnight damage caused by waves of up to 6.5m that were expected to hit the Wellington coast overnight.

As day breaks in the Capital, authorities are warning that the huge swells overnight – “an enduring high tide” – were likely to still pose a threat up to the next high tide just before 9.30am.

Officials say it appears homes have escaped damage from heavy swells on Wellington’s South Coast, although waves breaking across the road have continued to throw rocks and driftwood up on to it.

However, Civil Defence controller Derek Baxter told RNZ people from about 20 houses in Breaker Bay refused to leave which was incredibly disappointing.

About 140 homes were yesterday evacuated at Breaker Bay on Wellington’s south coast, with waves of up to 6.5m breaking over sea walls and on to residential properties. Police have set up road-blocks at either end of the line of homes.

A section of road had also been closed between Happy Valley Rd and Red Rocks.

“Thekey message is that the threat of heavy swells around the south coast of Wellington and Wairarapa is not yet over. High tide is expected around 9.30 this morning and residents should stay away from the coast until that threat has reduced,” Holmes told Newstalk ZB.

“People should stay away from the water so they don’t put themselves at risk.”

He also warned people to steer clear of floodwaters until any damage to roads could be assessed.

Cordons will stay in place at Breaker Bay this morning. The 7am Civil Defence meeting will assess any overnight damage, and the latest Met Service information.

“Indications are it’s an enduring high tide…we are seeing an increase in the energy of the level of waves; that’s what we’ve been dealing with. We’ve been watching this since it impacted the south coast yesterday.”

MetService forecaster Gerard Bellam said waves as high as 10m had been recorded at a buoy off Owhiro Bay on Wellington’s south coast overnight.

The Baring Head buoy at the harbour’s entrance had continue to measure waves between 6-8m and while the Taputeranga Marine Reserve buoy registered waves from 6.1- 10m.

He warned Eastbourne Rd was also vulnerable as it was close to sea level with waves washing over and leaving debris on the road.

“Unfortunately that’s going to coincide when people are on the road most of this morning,” said Bellam.

The heavy swell warning remained in place until 11pm.

Five families had asked for assistance with accommodation overnight.

The worst impact was likely to be felt through to 3am and the extent of damage wouldn’t become clear until first light this morning.

Authorities declared a local state of emergency yesterday afternoon and warned that swells of up to 6.5m – due to hit parts of the capital and Wairarapa last night – posed a “significant risk” to life and property.

Police had set up checkpoints around Breaker Bay and would maintain a presence throughout the night to protect vacant properties from potential looters.

The powerful tidal surge came as an Antarctic blast swept up the country, closing roads and forcing the cancellation of flights and ferry services yesterday.

Meanwhile, many in other parts of the country will wake from “one of the coldest nights of the year”. MetService said temperatures dropped to below 0C in Auckland overnight.

As well as bone-chilling temperatures, the wild weather dumped snow as far north as the Bay of Plenty and brought heavy rain, hail and fierce winds up to Auckland.

The Desert Rd remains closed by snow and ice and overnight. Snow flurries were registered

In Wellington, roadblocks were erected on the south coast where the waves were expected to hit hardest, to prevent sightseers from getting too close.

Newstalk ZB reporter Jack Crossland said all you could see from the summit of Breaker Bay was the white of crashing waves.

“When I hopped out of the car, you could barely stand on two feet.”

Ōhwiro Bay resident Eugene Doyle said a cordon was up at the intersection of Ōwhiro Bay Parade and Happy Valley Rd last night.

Wellington City Council Civil Defence Controller Derek Baxter said he saw 10 cars at the Ōwhiro Bay cordon which shouldn’t have been there.

“It has become the exciting thing of the evening to pull up into one of the bays and shine your headlights and see if you can use them like a flash to get a great photo and that is not helping us or emergency services.”

Authorities knocked on every door within the Breaker Bay cordon last night and some people have chosen not to evacuate, Baxter said

As residents piled sandbags at doors yesterday, memories of the destruction caused by a massive swell in April 2020 flooded back.

Ōwhiro Bay resident Kristen Meads put sandbags across all four doors of her home, including the cat flap, removed all the pots from her front yard and stacked her outdoor furniture.

Her treasured succulents were on top of the woodshed.

Meads said she felt more prepared for this year’s storm compared to when huge waves struck in April last year, smashing over her house, the water gushing in under doors.

“Our garage door was basically like a pretzel inside of the garage, the force of the water was just insane”, Meads said.

“Our friends’ window was smashed in last time and that would be my biggest fear.”

Properties were evacuated on Breaker Bay Rd between numbers 53 and 194 and Wellington City Council spokesman Richard MacLean estimated at least 200 people were affected.

Weather officials said the worst waves would accompany the coast’s high tide just before 9pm last night. They warned that large swells would continue bashing the south coast at high tide this morning and evening.

Yesterday two kayakers paddling near Marine Parade in Wellington sparked a rescue mission – but the men say they weren’t in any danger and were frequently out in similar conditions.

However, the decision left the city’s mayor baffled.

“It’s the sort of thing where you go, ‘What on earth were you thinking,” Andy Foster said.

Breaker Bay resident Heidi Barrenger was driving one of her daughters to gymnastics when her cellphone lit up with messages asking if she was ok and talk of evacuation.

“We quickly turned our car around and as a family decided that we definitely needed to [be] evacuated so we packed our bags.”

The family stayed with friends in Seatoun last night.

Barrenger said she felt panicked initially while her daughters were excited.

“But we’ve been living in Breaker Bay for about 12 years now and we’ve had this happen a couple of times. We’ve only evacuated one time before form an earthquake and tsunami risk but we’ve had storms before.

“I think probably they picked up on a bit of panic from us and then they [my daughters] started being a little bit more scared and anxious about how long we were going for and if the house was going to be ok.”

Barrenger “cracked open a bottle of red” when she was safely in Seatoun.

The polar blast dumped snow in several parts of the country yesterday forcing road closures – including the Desert Rd, State Highway 2 near Gisborne, and SH87 in the South Island between Kyeburn and Outram.

Flights were cancelled – including 29 in and out of the capital airport alone.

All Interislander sailings have been cancelled today.

Aucklanders shivered through one of the coldest nights of the year with MetService expecting the mercury to plunge as low as 1C in Pukekohe and Papakura this morning.

Highs for much of the country yesterday were single digits – with Waiouru on the Desert Rd only creeping up to 2C, while Te Anau, Queenstown and Masterton recorded 5C.

MetService Meteorologist to Mmathapelo Makgabutlane said there were reports of snow as far north as Whakatāne yesterday while parts of Southland were coated with 15cm of snow and snow blanketing a New Brighton beach.

Makgabutlane said there was an easing trend for the days ahead. While Kiwis would still need to wrap up, especially to bear the early morning cold temperatures, a high pressure system was coming from Thursday bringing settled conditions for the bulk of the country.