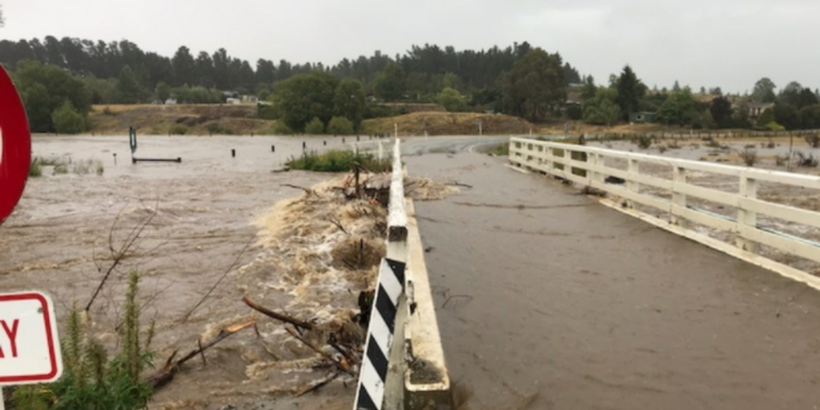 Campers in Central Otago are being advised to relocate to higher ground, as continuing heavy rain in parts of the South causes river levels to rise.

Persistent and heavy rain has led to the cancellation or postponement of large-scale events scheduled to take place today and a warning for road users to take care.

The Central Otago District Council advised at 9.30am there were areas of isolated surface flooding across the districtand river levels were starting to rise.

“If you are camping, take advice and relocate to higher grounds.”

A spokeswoman said they expected conditions throughout the district to get worse today and river levels were swelling.

Danseys Pass Rd is closed from the Kyeburn River Rd intersection to the summit, andScotts Lane is closed at the bridge.

Teams will be working in the Maniototo clearing debris from bridges and culverts to reduce flooding.

Motorists throughout the South are advised to drive to the conditions after several crashes on wet inland Otago roads yesterday.

A heavy rain warning for Dunedin applies until 11pm today.

The MetService rain warning also applies to North Otago and Clutha north of Balclutha until 11pm.

A heavy rain watch also applies to Central Otago, the Southern Lakes and Southland, north of Gore, until 9pm today, as well as the Canterbury High Country, south of Fairlie. Thunderstorms were also possible today.

Heavy rain may cause streams and rivers to rise rapidly. Surface flooding and slips are also possible and driving conditions may be hazardous.

TRIATHLON, FOOD FESTIVAL AND RACES OFF

In Cromwell, organisers of The Gate Lake Dunstan Triathlon and Duathlon have postponed the event in the interests of safety and said a new date would be set as soon as possible.

The Cromwell Wine and Food Festival, scheduled to take place in the town’s heritage precinct from 3pm, has been cancelled.

The Omakau Trots also became a casualty of the weather. The Central Otago Trotting Club cancelled today’s race meeting, expected to draw thousands of punters, because of what it described as “major surface flooding” throughout the car park and racecourse.

Club president Graham Sinnamon had to make the tough call after monitoring the track through the night. “Head versus heart – it was a horrible decision to have to make.”

The Glenorchy races have been postponed until tomorrow because of the rain.

However, the Wanaka rodeo will go ahead as planned.

MetService weather forecaster Aidan Pyselman is urging motorists to drive to the conditions in Otago-Southland given heavy rain is expected to continue today and could, in some places, reach up to 140mm by 11pm since the start of yesterday. Rain is also expected tomorrow.

Dunedin city recorded 28mm of rain by yesterday at 6pm, and today would be “not a great day” in terms of rain. “Still more rain” is forecast for tomorrow.

A further 60mm to 100mm of rain is expected today; the largest amounts likely about the hills and ranges of North Otago and Dunedin.

Monday will be drier and warmer, with 19C predicted for Dunedin, up from 113C at 3pm yesterday.

The weather would improve until Wednesday, Pyselman said.

A Dunedin City Council spokeswoman said the DCC was working hard to keep drainage grates unblocked and was asking residents to help by clearing any debris blocking grates.

Sandbagging stations had not been set up at this stage, but the DCC was on call overnight, would be managing the situation and keeping an eye on the weather forecast, Graham said.

The situation would be reassessed this morning, including the updated weather forecast, and residents would be informed via media and social media if sandbagging stations would be established today, she said.