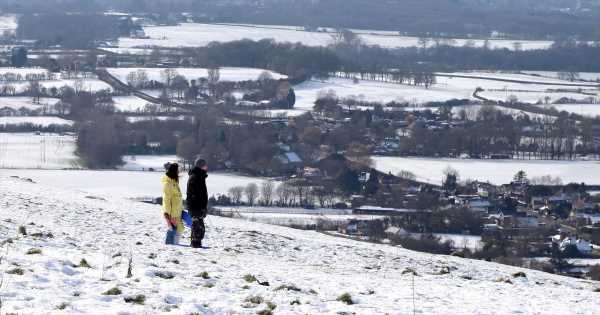 Brits spoiled by early spring sunshine are in for a rude awakening as cold weather from the north threatens chilly lows and a chance of wintry snow showers.

The latest weather charts show a wave of cold air moving through the country followed by a bout of low pressure.

Forecasters fear this could be the perfect condition for polar -3C temperatures and an increased risk of snow or sleet showers.

According to the Met Office the fresh sunny weather could be gone as soon as Wednesday.

Showery rain will gradually appear from the north, with the south generally a lot milder.

Thursday going into Friday will be a lot colder, with light rain, and the chance of snow in the north of England and Scotland.

In the south, the weather is looking a lot milder, but weather maps show temperatures are not expected to rise above 4C.

Most of England, including Scotland and Wales, will be feeling the sharp bite by Sunday March 7, making for a chilly start to the second week of the month.

Freezing conditions are expected to last throughout the weekend into early new week, with charts predicting warmer temperatures as early as Tuesday March 9.

Jim Dale, from the British Weather Service, told the Express the cold spell is due to the loss of high pressure.

The drop, combined with a northerly breeze, will start to "pull in" the "air stream" across the UK, but "especially" over high ground.

Thankfully, Mr Dale said Brits will not be facing conditions seen in early February, which isolated rural communities and prevented the elderly from getting their coronavirus jab.

He said: "The reason for it is we lose the high pressure. We start to pull in a northerly air stream.

"That has got potential for some sleety or snow showers, especially over the high ground in the north."

Mr Dale added that there is the potential for "ice and snow warnings" as the "week goes on" and possibly even "towards the weekend" as the polar plunge kicks in.