Here comes Oscar! Weather warnings for 70mph winds and heavy downpours as the tail end of ex-hurricane is set to lash Britain TONIGHT after a frosty start and temperatures dipping to -5C

Parts of Britain will be hit by heavy downpours and high winds from tonight as the country is lashed by the tail end of ex-Hurricane Oscar.

The tropical weather system formed in the Atlantic south east of Bermuda last weekend and has been building as it crosses the ocean, with forecasters issuing a rain warning for western Scotland from midnight tonight.

The storm’s course is likely to take it north towards Iceland instead of making a direct path for the UK – but as it moves past Britain and Ireland, it is expected to bring severe gales and torrential downpours to Scotland.

The Met Office has issued a yellow ‘be aware’ warning of intense rain for the full 24 hours of tomorrow, for up to two inches (50mm) of rain on lower ground, and more than three inches (80mm) on higher ground.

Heavy rain will also fall in Northern Ireland, Wales and North West England tomorrow – although the rest of England outside Cumbria and Lancashire should escape the downpours, with sunny and cloudy conditions expected. 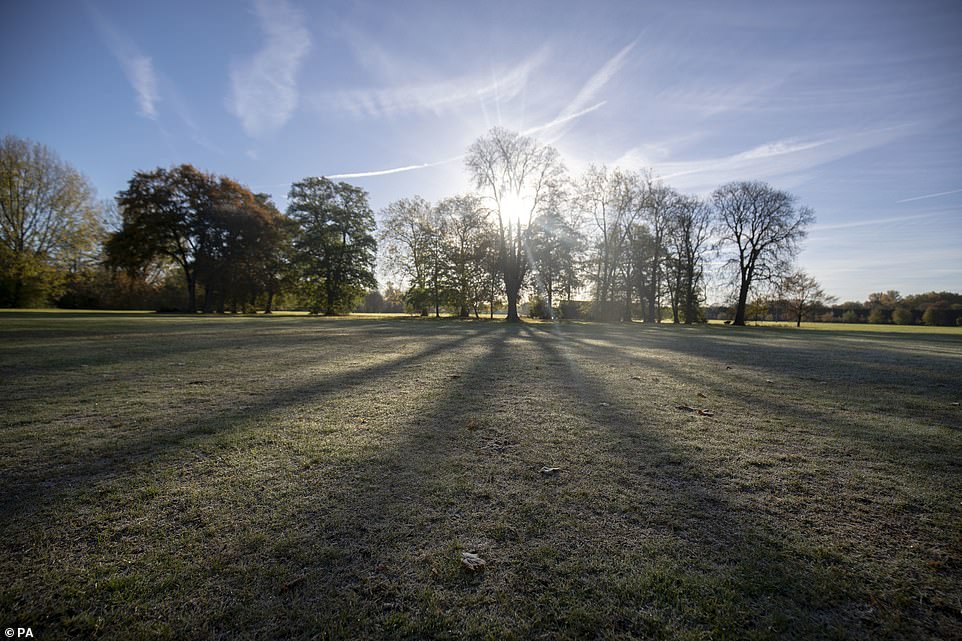 Frost covered Holme Park in Windsor, Berkshire, as the UK wakes up to further cold weather this morning 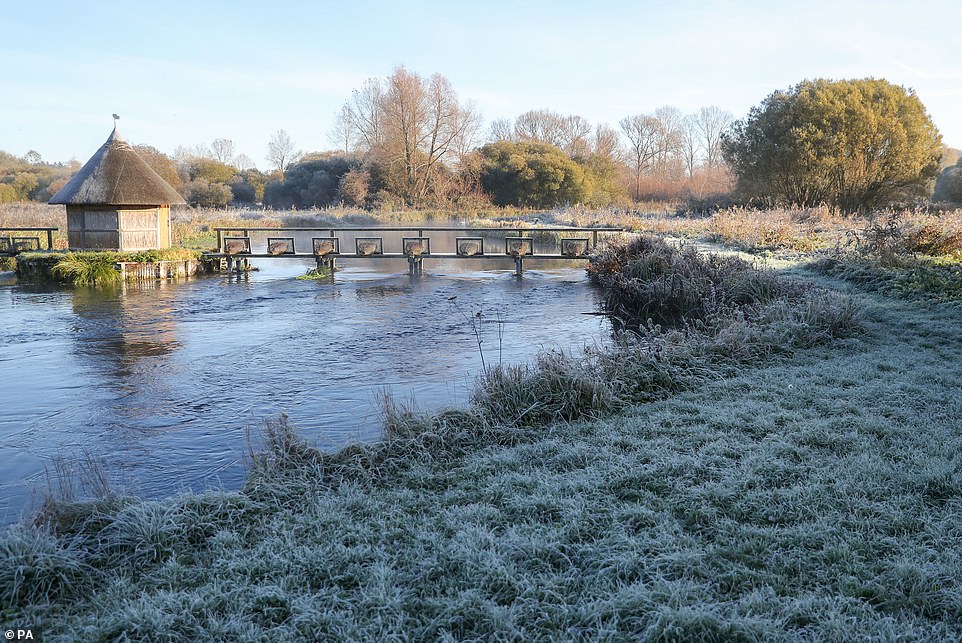 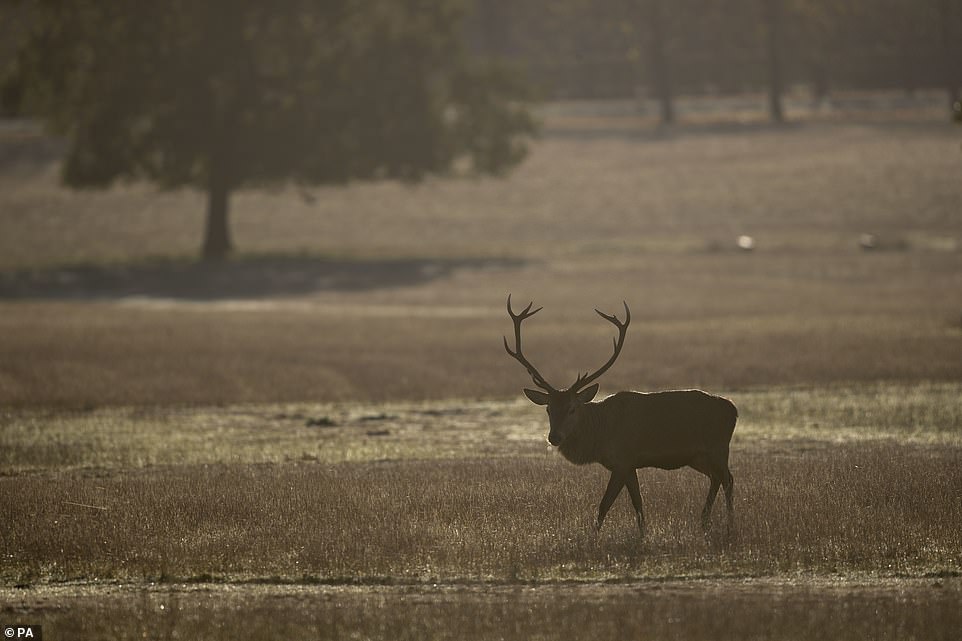 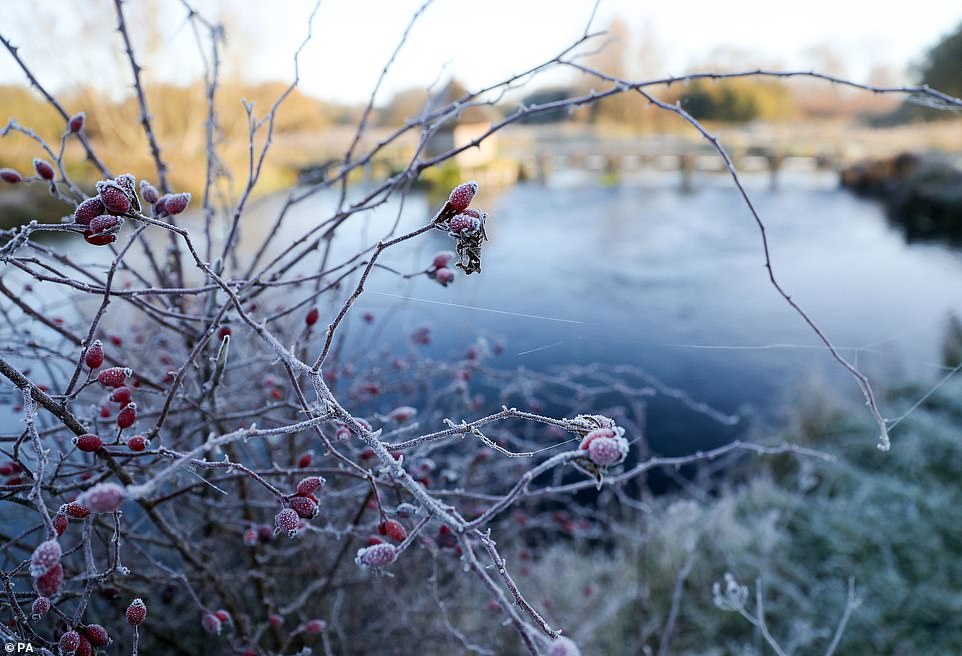 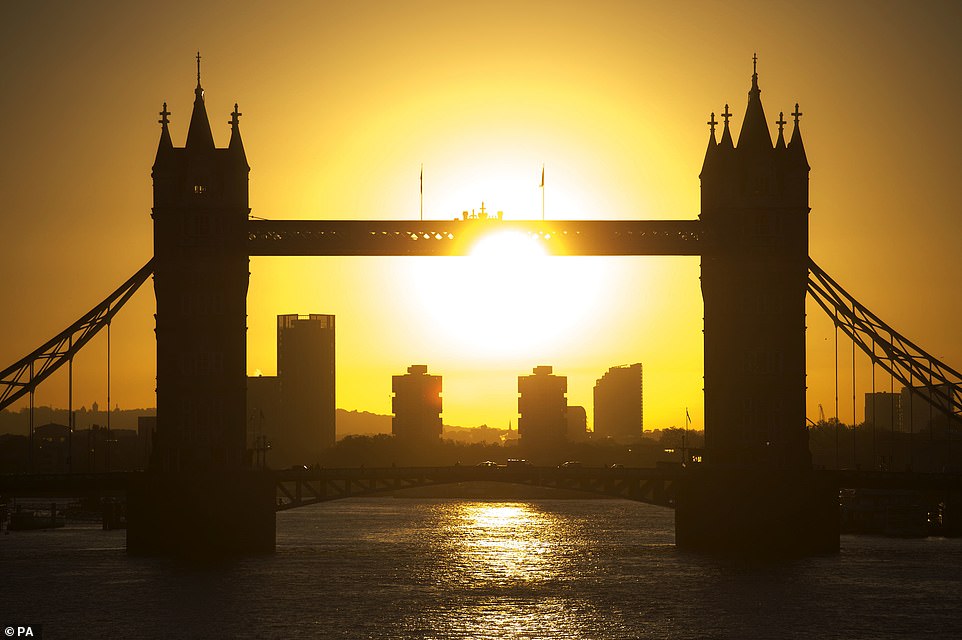 But overnight temperatures will be rising as the country heads into the weekend – with up to 6C on Friday night and 11C on Saturday night expected in the South West, and most parts of Britain unlikely to go below 0C.

Last night, CalMac put many of its services in western Scotland on notice for delay or cancellation and there were warnings of widespread traffic chaos. It also warned that various Saturday sailings are under threat.

Speaking about Scotland’s weather, Met Office forecaster Bonnie Diamond said: ‘Friday afternoon and evening will start to see rain arriving and it all goes downhill after that. Winds will strengthen late on Friday and on Saturday.

‘It really doesn’t stop raining the entire day. It is all to do with ex-Hurricane Oscar. The main low pressure system surrounding it will make for Iceland, but unfortunately Scotland will get the remnants.’ 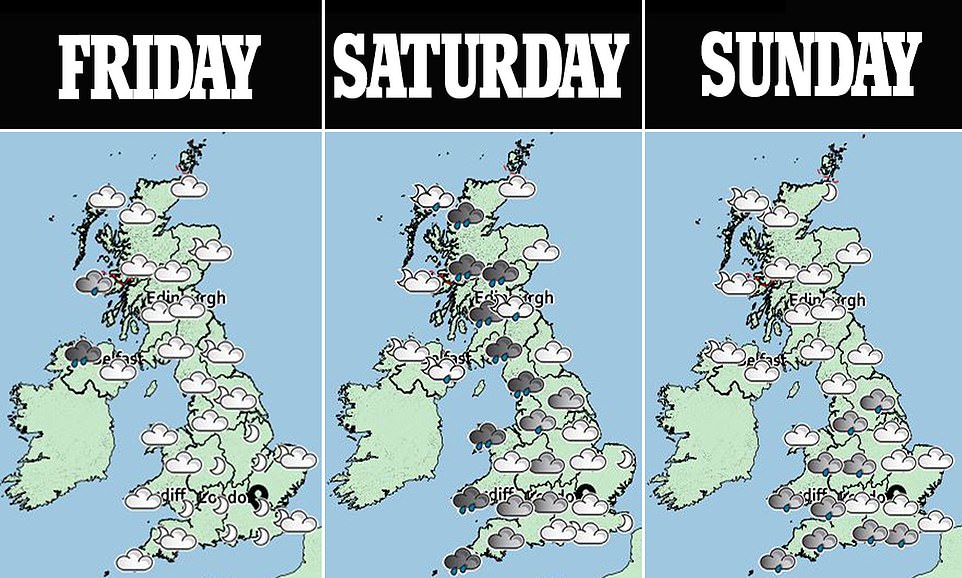 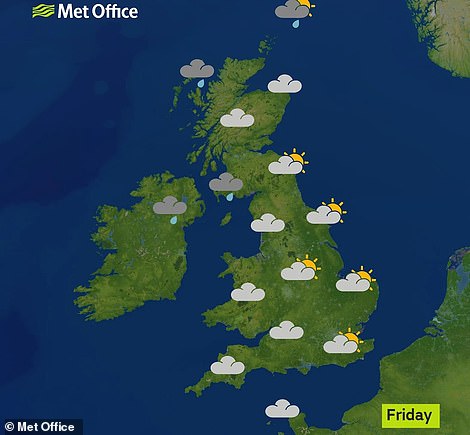 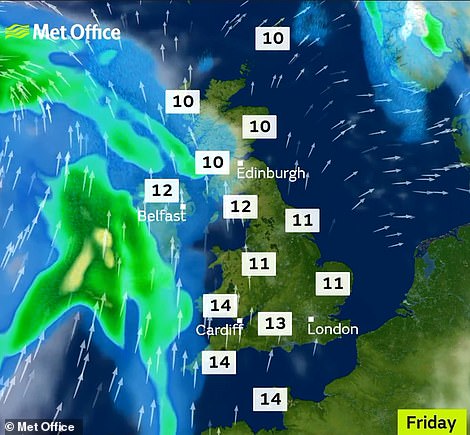 Today will bring sunny conditions for eastern areas, although will still be some rain in western Scotland 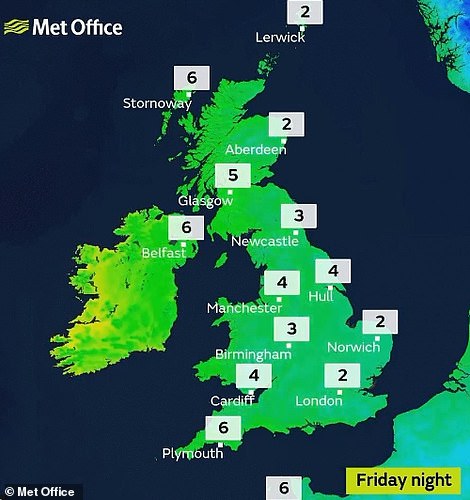 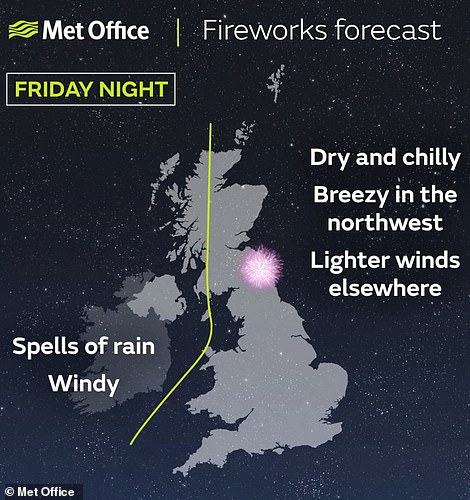 Tonight will see temperatures dip to 2C in South East England, but conditions should be fine for fireworks in most areas 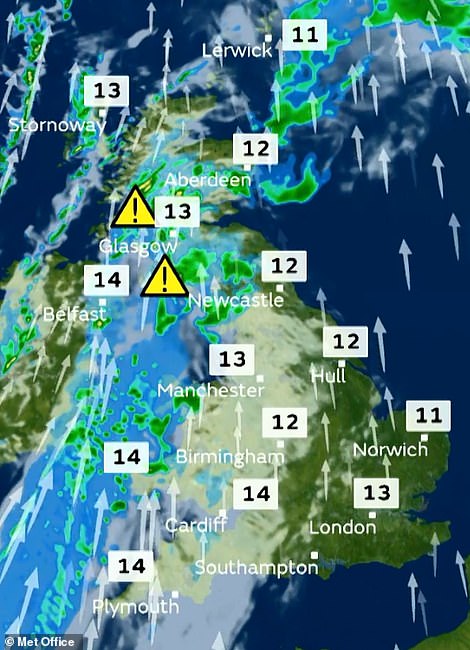 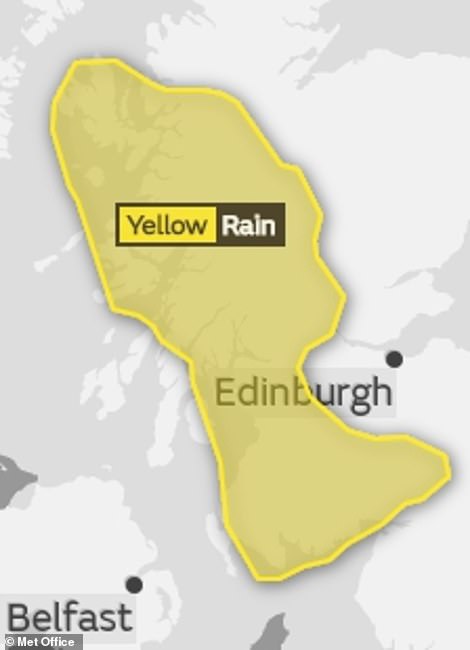 Tomorrow will bring heavy rain to western Scotland, with a Met Office warning imposed for up to 3in (80mm) to fall 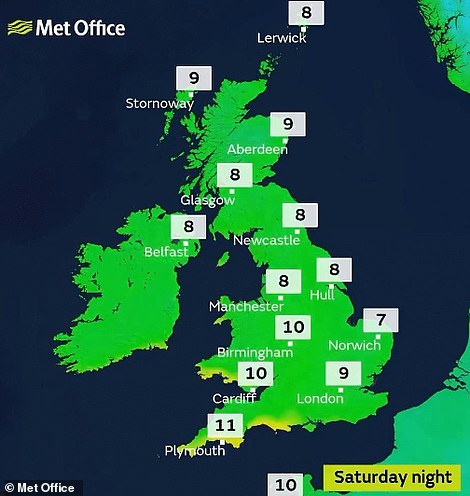 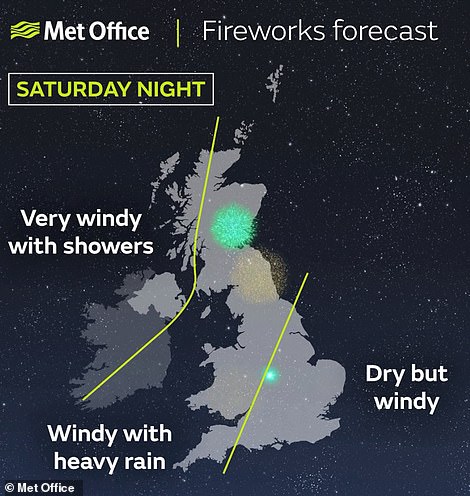 Tomorrow night will be much milder, with 11C possible in the South West – although the weather will become windier

Drivers are being warned that spray from vehicles and possible flooding are expected to make journey times longer. Areas affected by the deluge include Central, Tayside, Fife, Lothian and Borders and Strathclyde.

Tomorrow’s combination of wind and rain could provide a major test of the repair work carried out on the A83 Rest and Be Thankful near Arrochar, Argyll, which was closed for a week last month after a series of landslides.

Motorists faced a 60-mile detour while work was carried out to clear the road and stabilise the hillside above it.

The rain is expected to ease in time for Bonfire Night on Monday when much of the country will be dry but cold. Miss Diamond said: ‘Sunday will see rain clearing in the early hours, producing a much better day than Saturday.

‘It will still be windy, with a mix of sunshine and showers. Guy Fawkes Night on Monday looks pretty decent, with sunny spells and the odd shower.’