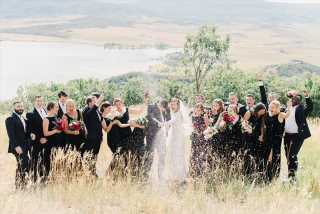 When it comes to weddings, several planners and industry experts expect this year to be the storm after the quiet of 2020.

Weddings that were postponed last year because of restrictions to slow the spread of the coronavirus were rescheduled this year. Couples who opted for “microweddings,” small gatherings with close family and friends, are holding bigger followup ceremonies or receptions this year and next.

The loosening and lifting of restrictions have inspired people to upsize this year and bring back dancing. On Friday, Gov. Jared Polis ended the state’s mask mandate in most public settings, while suggesting that unvaccinated people still wear them.

“I think that Colorado is really going to be exploding this summer with events,” said Katherine Frost, who recently started a high-tech wedding planning platform. “I think this will be a great summer.”

That tracks with projections by The Knot, a tech company that provides wedding products and services. A recent report by the company said about 40% of couples who planned to wed in 2020 went ahead with the ceremony and reception while nearly half postponed their reception. About 15% postponed the whole affair, with most deciding to wait until this year.

“Business is picking up across the board for everyone,” Frost said. “I’ve actually heard from a lot of event planners and we’ve seen it on our platform as well, that they’re not being able to keep up with the influx in proposals that they need to be sending. But also with that comes a venue shortage.”

Colorado’s events industry, pummeled by the pandemic, is trying to regain its footing. Frost, who launched her company ORO in November after years in the events industry, said planners are taking on additional duties because they had to let employees go or people left for other jobs when business nosedived.

A survey by the Colorado Events Alliance, formed by people in the industry when the pandemic started, showed that planners, caterers, florists, venues and others saw business drop an average of 85% due to COVID-19, said Brynn Swanson, an alliance board member and owner of First Look Events.

“In a typical year we usually do around 40 weddings. Last year, during COVID, we did three. We got significantly crushed. The industry as a whole got crushed during the pandemic,” Swanson said.

The events alliance has raised money and distributed more than $35,000 for frontline workers in the business. Swanson said the organization advocates for the industry with government officials and recently received a $150,000 grant through the city of Denver for workers who live in the city.

There were 1.26 million weddings nationwide last year, compared to 2.12 million in 2019, according to The Wedding Report, a research company. The forecast for this year is 1.9 million, based on surveys and market data.

The industry generates about $1 billion in revenues annually in Colorado, which is a top for destination for weddings, Swanson said. She expects most of the 30 weddings that her clients rescheduled for this year to go forward.

The Knot is seeing about a 25% uptick in weddings in 2021, senior editor Esther Lee said in an email. About 47% of all the weddings are expected to take place in July through October. Lee said she is recommending that couples get moving on planning.

Karen Cleveland, a writer in Toronto, said although business is starting to rebound, she thinks many changes in weddings caused by the pandemic will stick around.

“I think there is going to be a fork in the road. For those who have the financial means and to whom a large wedding feels important, you are going to see that,” Cleveland said. “I think for the rest of us mere mortals, the idea of breaking the bank for a wedding feels a little out of touch now.”

Cleveland, co-author of the newly published “The New Wedding Book: A Guide to Ditching All the Rules,” thinks smaller weddings and including guests via Zoom will continue because of cost and convenience.

Alison Collier and Justin Tafoya, both from Denver, have traveled a different path than they expected after becoming engaged last July. They started looking at possible wedding dates for 2021 but didn’t feel certain about the timing.

“When we were going to sign the contracts, it was kind of the height (of coronavirus cases). It was in the early fall right before the holidays,” said Collier, a nurse practitioner. “We were kind of freaking out because the vaccine hadn’t come out yet.”

They have put down a deposit for their wedding, scheduled for Sept. 3, 2022, in Steamboat Springs. But they didn’t wait to get married. Like other couples, they decided to elope rather than wait out the pandemic. The formal gathering was planned for when they figured it would be easier for people to travel and mingle.

In April, Tafoya and Collier exchanged vows in front of a handful of people in Big Sur in California. Tayfoya’s brother who officiated had to do it virtually because he came down with COVID the day before the nuptials.

Tafoya, a photographer, said the couple didn’t want to put off making it official. “We’re 35 and we’re kind of the last of our friends to get married, which doesn’t matter to us really,” he said, adding that there were more practical considerations.

“We just thought if we bought a house before the wedding it would just be easier to be married,” Collier said.

Delayed weddings coupled with the number of weddings on the rise are straining a business that isn’t at normal staffing.

“On average, over 2 million people get engaged every year. Now we have an influx of 4 million people that maybe didn’t get married during the pandemic but now they’re trying to plan their wedding either this year or for next year,” Frost said. “So you’re having this huge influx for the events world, which sounds incredible, but it’s also very stressful if you can’t have the staff for it.”

Stephen Tanner, owner of Elevated Catering, said after a tough year during which he let go 35 part-time employees and all but one salaried employee, his chef, he was ready to start rehiring. However, he’s concerned that COVID-19 variants will cause problems if more people don’t get vaccinated. And he thinks people are holding off on planning events to see what happens.

“Business is starting to come back, but it is taking a while,” Tanner said. “Most large functions are getting planned are out to the fall, September or later.”

Caution about COVID-19 isn’t gone by any means. Jennifer Pletcher, owner of Gemini Event Planning and Design in Vail, said many couples and the venues are asking guests to take rapid COVID-19 tests to ensure everyone stays safe. Weddings are booking bigger dance floors to give people more space.

And during the past year, couples who decided to have weddings found creative ways to make up for downsized ceremonies and receptions, Pletcher said. One of her weddings last year reduced the number of people to just 30, but added acrobats, other entertainment and “over-the-top floral,” unique touches that might not have been possible with a bigger wedding, Pletcher said.

Still, people are ready to resume some semblance of pre-pandemic normalcy, Pletcher said. After Polis lifted the statewide mask mandate, she quickly notified her clients.

“I have sent it to every single bride I have for this summer via text and everyone is like ‘This is great news.’ It’s encouraging, going in the right direction that we were hoping for.”