A historic town celebrated becoming ‘plastic-free’ by hanging up a giant banner… made of plastic.

The town was mocked for the 10ft banner hanging from a 13th century archway into Chepstow, Monmouthshire, after it was granted plastic-free status by an environmental group.

It was proudly placed in the town centre with the words: ‘Plastic Free Chepstow.’ 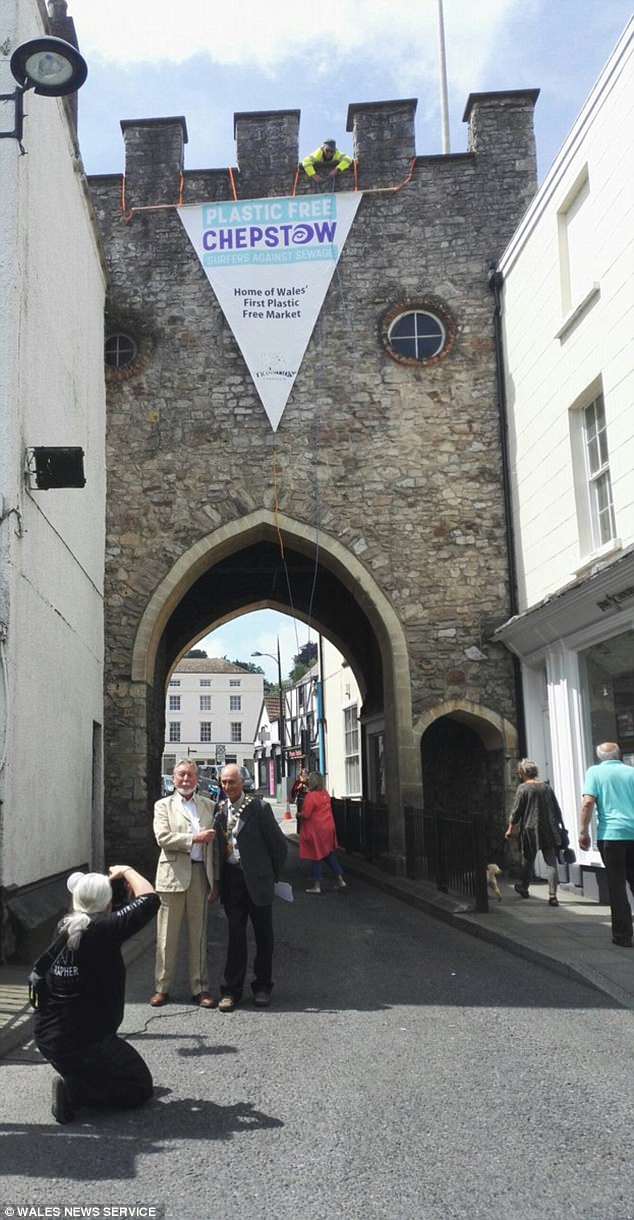 Councillors in Chepstow, Monmouthshire have erected a 10ft banner announcing the town’s market is now free of single use plastics… unfortunately the banner is not biodegradable 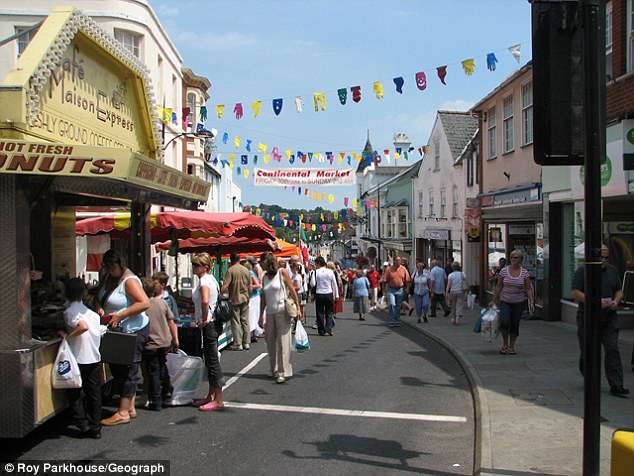 But the triangular blue and white flag was ridiculed as ‘beyond irony’ by the town’s former mayor because it is made of plastic.

The ancient border town of Chepstow was granted the status by environmental group Surfers Against Sewage.

The banner was put over the stone 13th Century landmark archway in a ceremony to celebrate the status.

But Chepstow town councillor and former mayor Armand Watts wants it to be taken down just days after it was hung on the weekend.

Mr Watts said: ‘This is beyond irony. The town council probably hadn’t even thought about the material.

‘If this is non-biodegradable, then it clearly should be removed and replaced.’

The town’s achievement comes after four months of preparation and campaigning by the group Plastic Free Chepstow.

And the group was further mocked for saying on social media that plastic was ‘more practical than the alternative.’

It said: ‘Yes the banner is plastic, we looked into it and decided that plastic was much more practical than the alternatives. It will be used many times and disposed of responsibly at the end of its life.’

A spokesman for the group said: ‘To clarify, we are focusing on trying to reduce the amount of single-use plastics used in town.

‘That is ‘disposable’ or ‘throw-away’ items such as crisp packets, Polystyrene food take-away containers and plastic takeaway coffee cup lids.

‘We understand, of course, that it is often absolutely necessary to use plastic products like our banner.

‘However it is important that, when we do, they are well-designed, durable and long-lasting.’

‘I’m sure we’ll be using this banner for many years to come..’

Mr Eele added: ‘It’s a big achievement but it’s really only the start.

‘There’s an awful lot of plastic still around.’

Volunteer Tim Melville said that plastic had been chosen over cotton because it is hard-wearing.

‘Plastic has a valuable role to play – it is in phones and all sorts of products,’ Mr Melville said.

‘The sign will be used for many years to come. Cotton was considered but it would have degraded and torn because of the length of it.’

Ten years ago in February, the Mail launched a trailblazing campaign to rid Britain of the scourge of plastic supermarket bags — prompted by a heartrending, shaming picture of an endangered turtle entangled in one, which was used on the front page.

The success of our Banish The Bags initiative has been nothing short of phenomenal.

Now, in a landmark series that could have just as big an impact as that front page a decade ago, we’re here to assure you that you really can make a difference — and your actions can help save our beautiful world and its animals.

The Mail’s Turn The Tide On Plastic campaign isn’t intended to make you feel guilty about plastic you depend on. Instead, this series will guide you through small daily steps you can take — with little expense or effort — to make dramatic inroads into reducing the amount of plastic you use.

Even simply changing one habit — such as using the reusable coffee cup we’re giving away today, instead of a throwaway cup — will help decrease the demand for new plastics. If every Daily Mail reader uses their cup just once a day in place of a takeaway cup, millions of plastic-lined paper cups will be saved from landfill in a year.

It’s simple maths. Use a plastic bag twice and you halve your plastic footprint. Buy one bar of soap and you may spare the planet two or even three pump-action hand wash bottles. Inspire someone else and the impact is doubled.

We’ll tell you how to double your recycling efficiency overnight, banish plastic from your kitchen and dodge food packaging. Better yet, you can even shop to save the planet with gorgeous — and reusable — plastic alternatives.

It’s never too late to start…