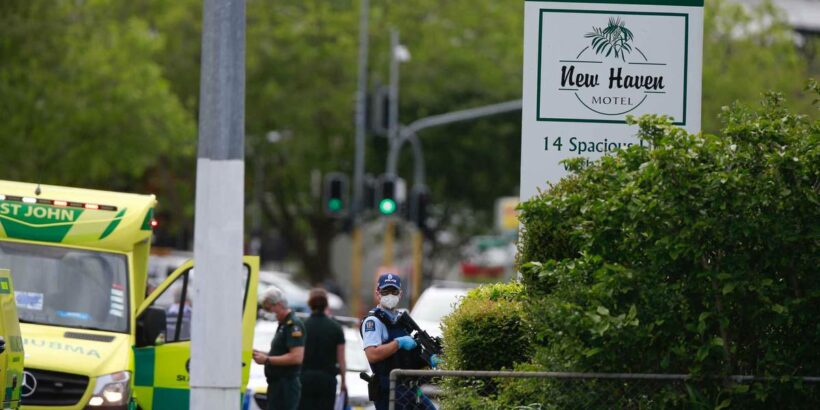 A fatal shooting in West Auckland “scared the living daylights out of” motel staff who were cleaning a room two metres away from where a man died.

He was found injured on the driveway of a property on Great North Rd in New Lynn on Friday just after 10am, after police received reports of a firearm being discharged.

Police tried to perform first aid but the man died at the scene.

His death prompted a homicide investigation which is ongoing. No arrests have been made.

The driveway sits next to the New Haven Motel, where cleaners were working on the morning of the incident.

“A girl was cleaning a room right next door, about two metres away from where it happened,” a staff member told the Herald.

“I thought it was a firework. I said: ‘No, no it’s only a firework’ and she said: ‘No someone has got a gun and they just shot that guy there’,” the staffer said, who the Herald has agreed not to name.

Before the alleged shooting, a car was seen driving into the motel carpark. Staff asked the driver to leave.

“This car drove in, parked across from the reception, it looked like one of the units’ [guests], but I knew they weren’t in there because the people had left,” the staff member said.

“I went to tell them ‘listen you can’t park here’… then slowly they turned off, they went to the front of the gate where the letterbox is and everyone got out of the car.

“Next thing, I heard the bang and the girl screaming over here saying, ‘Someone just shot that guy’.”

The staff member said the property where the man died has attracted police on multiple occasions over the years.

He said the police activity is costing the motel business and he worries about his safety. He said he has received calls from concerned family in Australia and England after the alleged shooting.

Police have spoken to motel staff as part of their inquiries and reviewed CCTV footage from the motel.

The staff member said CCTV footage has captured cars parking near the motel at night and people coming in and out, sometimes at 3am.

“It’s just getting too dangerous,” he said.

Police have finished a scene examination but inquiries are ongoing. Officers were seen at the property on Great North Rd today.

Police said they “do not believe this was a random incident” but there is no suggested danger to the wider community.

A section of Cliff View Rd in Green Bay was cordoned off on Friday as part of the investigation, and police searched multiple addresses with support from the Armed Offenders Squad.