A West Point drummer who was hit with an ax during a Fox & Friends segment is now suing the show.

Jeff Prosperie claims he suffered ‘pain, disfigurement and loss of bodily function’ after being hit during a Flag Day segment filmed in New York in 2015.

Prosperie accuses co-host Pete Hegseth of ‘acting negligently’ when he threw the ax, which sailed over a target placed on the sidewalk before striking him in the arm.

At the time Prosperie was standing in a line of three drummers behind the target.

‘The incident involving Jeff Prosperie from 2015 was unfortunate and completely unintentional. Fox News immediately apologized to Prosperie and offered medical assistance, which he declined saying he was “okay,”‘ said a Fox News spokesperson.

‘The network also offered compensation, which he declined as well. We have not heard from Prosperie since 2015, so the lawsuit is surprising and we are reviewing it.’ 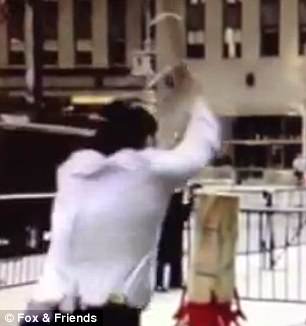 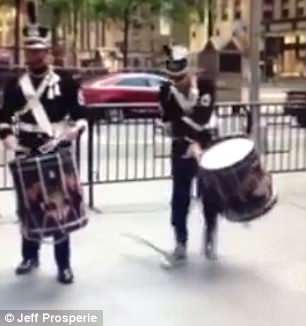 Drummer Jeff Prosperie is suing Fox & Friends and co-host Pete Hegseth after he was hit with an ax during a Flag Day stunt in 2015. Hegseth threw an ax at a target (left) but missed, striking Prosperie (right) who was standing behind it 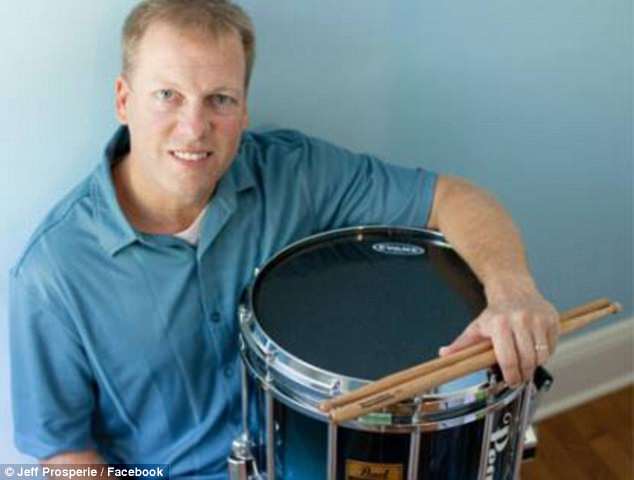 Prosperie claims he suffered ‘pain, disability and disfigurement’ from the ax blow and was left unable to work afterwards 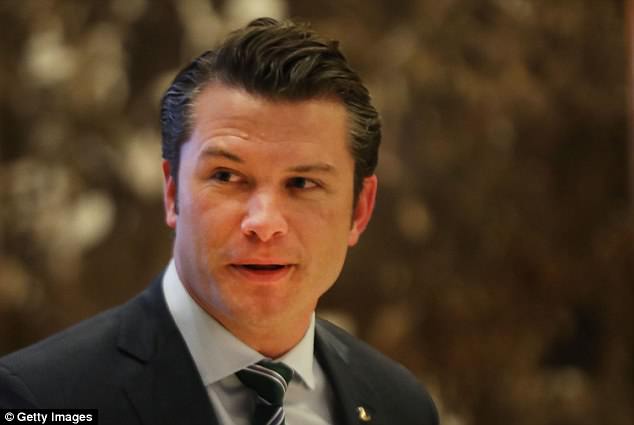 He says the target was ‘negligently placed’ in an area which put himself and other pedestrians ‘in the path of peril’.

Prosperie claims Fox & Friends executives had told him to stand behind the target despite knowing of the potential danger, and had failed to properly train Hegseth to throw the ax.

He says the network acted ‘with reckless disregard for the safety of others’ while planning the stunt and designing the set.

The lawsuit also accuses a Fox & Friends producer, who is not named, of negligence when placing the target.

He was forced to take time out from work and other activities because of the injuries and may be forced to miss more time in the future, the suit claims

Prosperie is one of the lead drummers from The Hellcats, which is part of the U.S. Army’s West Point Band. 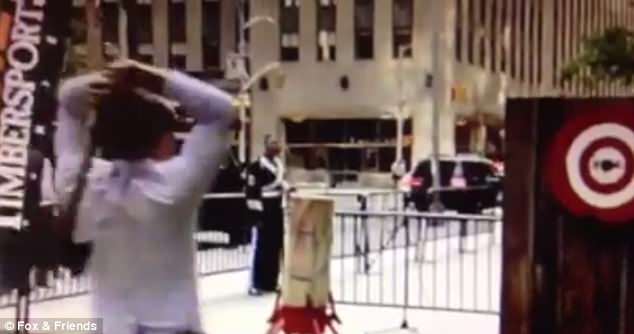 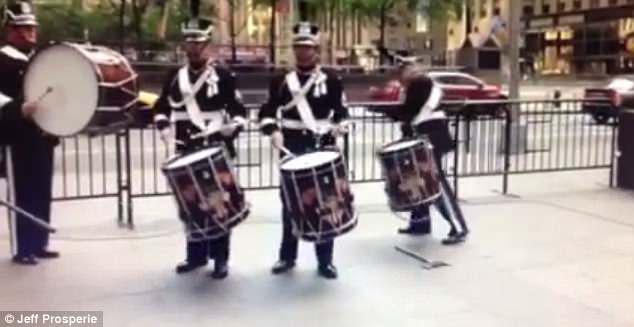 The televised segment of Fox & Friends showed Hegseth missing the target, but failed to show Prosperie being hit (above) which was captured on a cellphone

After being hurt by the ax Prosperie posted a video to Facebook showing how the events unfolded.

In the video, Hegseth is seen missing the target with the ax before he grimaces and walks over to look behind the board as if looking to see if he hit someone.

The video then cuts to cellphone footage which shows Prosperie standing alongside two other drummers as they perform.

An ax can be seen clattering off the sidewalk and into his arm, causing him to clutch it around the elbow and walk away, obviously in pain.

In a Facebook post alongside the footage, he wrote: ‘I was hit by an ax while performing a drum solo live on National TV…..words I never imagined saying!

‘This happened last Sunday and I have been reluctant to post but starting to receive inquiries from concerned family and friends.

‘I am thankful to God that the double sided blade only hit broadside on the outer elbow with significant impact and a couple of cuts as it fell along my wrist.

‘It could have been much worse or fatal. Focusing on full physical and emotional recovery.

Speaking about Hegseth, he continued: ‘My leadership told me they were told there would be no ax throwing. I think the anchor person went rogue and decided to throw it. 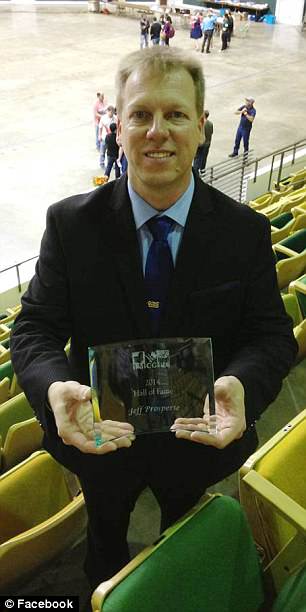 Prosperie, a father of five, previously wrote on Facebook that his commanders had assured him there would be no ax throwing live on air

‘He had only thrown it once before in practice for an upcoming segment and they told him to throw it with more force.

‘The vid you see is edited showing the televised portion of the throw and then edited to a portion that was taken on someone’s phone of us being videoed.

‘The part that was actually televised showed the overthrown ax and then segued to us for the drum solo bump, only showing me walking behind the section holding my arm.

‘The actual part where the ax hit me was not televised. Poor decision, obvious negligence, should not have happened, could have been avoided.

‘When shooting or throwing, always know what is behind your target. Basic safety rule. I’m feeling blessed on Father’s day with my 5 children, alive, and with all limbs.’