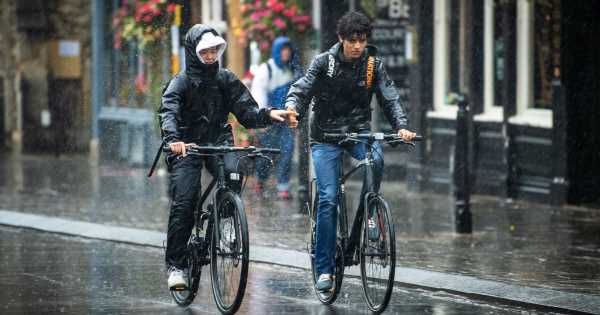 Brits have been battered with severe thunderstorms and heavy rainfall over the past 24 hours, and the wet and wild weather may be staying long-term.

The Met Office's long-range forecast reveals that more heavy storms and washout days are ahead for September and October.

Although temperatures are less likely to plummet alongside the downpours, the sunshine will be hard to come by over the coming weeks.

There is also a divide set to take place for the UK, with certain areas experiencing the rare sunshine days while millions of other Brits get swept with wind and rain.

For the final two weeks of the month, between September 19 and 28, cloudy conditions and rainfall are taking precedent, according to the Met Office.

There may be the occasional confident brighter period although the weather agency warns of a north and south divide.

The central parts of England, as well as London, may enjoy some ays but rain could also fall down, spoiling any warm spells.

The northwest will endure the worst weather, with unsettled conditions and heavy rain alongside strong gusts battering Brits.

Although the southeast is expected sunshine, the dreary storms from the other end of the UK could "still spread here at times".

Hopes for an Indian summer or late burst of heat for September are not set in stone, with the Met Office forecast declaring temperatures are predicted to be average for this time – at the moment there is no heatwave in sight.

The forecast reads: "The northwest will see the most of any unsettled conditions and outbreaks of rain, which could turn heavy at times, as well as occasional strong winds.

"The southeast then sees drier weather with plenty of sunny periods, though the unsettled weather in the northwest could still spread here at times. Temperatures are expected stay around average throughout this period."

For the final days of September and the beginning of next month, confidence is "fairly low", says the meteorologists.

Current weather maps detail low pressure in the northwest with storms, rain, and wind continuing for some time.

It appears the wet and wild conditions may spread southwards, although, mercury could spike to above-average levels at this time.