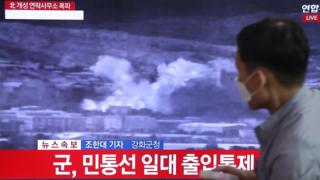 At 14:49 on Tuesday (05:49 GMT), explosives demolished the Inter-Korean Liaison Office in the North Korean border city of Kaesong.

The provocative step, coming just one day after the 20th anniversary of the first ever inter-Korean summit between Kim Jong-un’s father, Kim Jong-il, and South Korean President Kim Dae-jung, marks an ominous turning point for the two neighbours.

Kim Yo-jong’s threats to reduce the liaison office to “dust” were meant to be taken literally.

An early statement from the South Korean Unification Ministry, pointing out that the action was telegraphed, suggests that Seoul intends not to publicly make the case that it was caught off-guard.

But the seriousness of the event – and its global headline-seizing nature – raises natural questions about what Pyongyang may be seeking.

There are few easy answers here, but many puzzle pieces that that form part of a bigger picture. 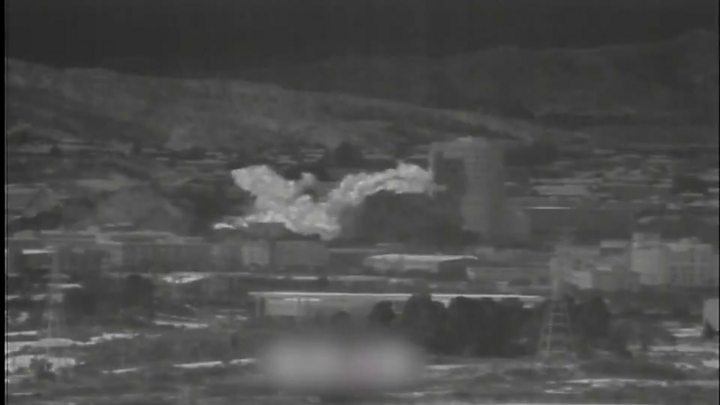 For example, we might recall the historic inter-Korean summit at the Panmunjom Peace Village, north-east of Kaesong, in April 2018.

While that event cemented South Korean President Moon Jae-in’s place as a historic statesman, for Kim Jong-un, one of the most important takeaways was to be found in what his South Korean interlocutor handed him on a USB pen drive.

Mr Moon had shown Mr Kim the promise of inter-Korean economic co-operation, outlining several projects that would allow the two Koreas – under South Korean guidance – to collaboratively build the economic linkages between them.

In the ensuing months, however, President Moon’s plans were limited by the continued existence of the onerous international and US sanctions that remained in place on Pyongyang for its testing and development of ballistic missiles and nuclear weapons throughout 2017.

Sanctions relief was North Korea’s core demand of the United States, of South Korea, and of the world through the two years of diplomacy that persisted from the Pyeongchang Winter Olympic Games, where Kim Yo-jong first made herself apparent as a force in inter-Korean relations.

This demand continued until the final days of 2019, when Pyongyang began to make clear that it had no expectations that diplomacy could yield fruit.

This is why the symbolic destruction of the facility that had been used to administratively realise inter-Korean collaboration strikes at the core of Mr Moon’s inter-Korean promises.

For the South Korean president, who finds himself with unprecedented political strength after his party’s strong showing in the April mid-term parliamentary elections, this moment may be designed to seek further concessions.

The proximal explanation for the North Korean step was clarified by Kim Yo-jong in her statement last weekend.

She cited the launching of anti-North Korean regime leaflets by South Korean civil groups, describing them as an insult to the “dignity” of the North Korean supreme leadership.

The leaflets, as grating as they may be for Pyongyang, likely do not tell us the whole picture. Part of the answer – unknowable as it may be given the nature of the North Korean regime – may have to do with Kim Yo-jong herself.

Kim Jong-un’s younger sister has seen a spectacular ascent in her public role in the effectuation of North Korean state policy in recent years.

Where she was once seen lurking behind a pillar as her brother delivered an address before a major military parade, she is now directing the Korean People’s Army to take action. Last year, she was for the first time seen overseeing missile launches with her brother.

Her role in inter-Korean affairs and her seemingly more significant role in guiding military activities may indicate her rising star.

Allowing her to oversee the demolition of the Inter-Korean Liaison Office may serve to bolster her leadership credentials, much in the same way that her brother was rumoured to have been instrumental in the sinking of the South Korean naval corvette, ROKS Cheonan, and the shelling of Yeonpyeong Island in 2010.

The current trajectory of inter-Korean ties does bring 2010 to mind.

What is concerning this time, however, is that North Korea is no longer the nascent nuclear aspirant it was then. Under the cover of its increased nuclear capabilities, Pyongyang may seek to torment Seoul for concessions and leverage.

Ankit Panda is a senior editor at the Diplomat and author of Kim Jong-un and the Bomb.