Watching from an elevated window at home as Hurricane Ian struck their farm in Fort Myers, the McMahon family saw the storm blow the market roof into the pond. Torrential wind and rain whipped across two acres of hydroponic vegetables.

By last week, the fourth-generation farm family had lost every crop. The lettuce they would have harvested a week later and the prized sunflowers — all shredded. The fall festival, planned for this week, is now off. No more waving marigolds, hayrides or pumpkins. Profits will take a hit for their business, Southern Fresh Farms Inc.

“It’s just heartbreaking because you know that this is your livelihood, and a big part of that time is coming up and being destroyed,” Robert McMahon said in a phone interview. “Everything that comes apart, it’s going to take that much longer to repair.”

Across Florida, Hurricane Ian trampled through about 4 million acres of farmland, according to the latest figures from the Agriculture Department for the affected counties. The impact may be small for acres of pasture use, said Gene McAvoy, an emeritus Hendry County vegetable agent.

Recovery for small farms like Southern Fresh Farms can be a long season. While larger, commercial farms may cover sprawling land, these farmers depend on smaller parcels, McAvoy said. Insurance money or funds from the Federal Emergency Management Agency may take up to a year to become available, he said.

“If you don’t have the money to keep going on your own, you’re pretty much stuck,” McAvoy said. “The smaller farmers are financially in a more precarious situation. Something like this could break some of them.”

The USDA offers disaster assistance in other programs for farmers as well.

The funds may aid farmers like the McMahon family who face flooding, scattered debris and long-term crop loss. Annual crops may regrow, but for fruit tree orchards, the damage seeps deeper. In the weeks after the hurricane, fruit and leaves will continue to fall, said Ray Royce, the director at Highlands County Citrus Growers Association. Once citrus tumbles to the soil, it cannot be sold.

“It is going to take a while to know the full impact,” Royce said, “but in certain areas we’re seeing 50% of the fruit on the ground already.”

Like the interior growing region, Southwest Florida’s barrier islands are no stranger to hurricanes. A 1926 hurricane struck Sanibel Island, choking farmland there. Farmers ceased seeding fruits and vegetables like tomatoes.

Today, neighboring Pine Island is famous for its mangoes, hosting a popular mango festival each summer. The Sapp family, rooted to the island on a mango farm, said in a Facebook message that they don’t know what is left on the 25-acre Promised Land Mangoes property and won’t be able to return for a while.

Along both coasts of southern Florida, the water tables rise high, tightening the space for tropical fruit tree roots. This heightens tree toppling. 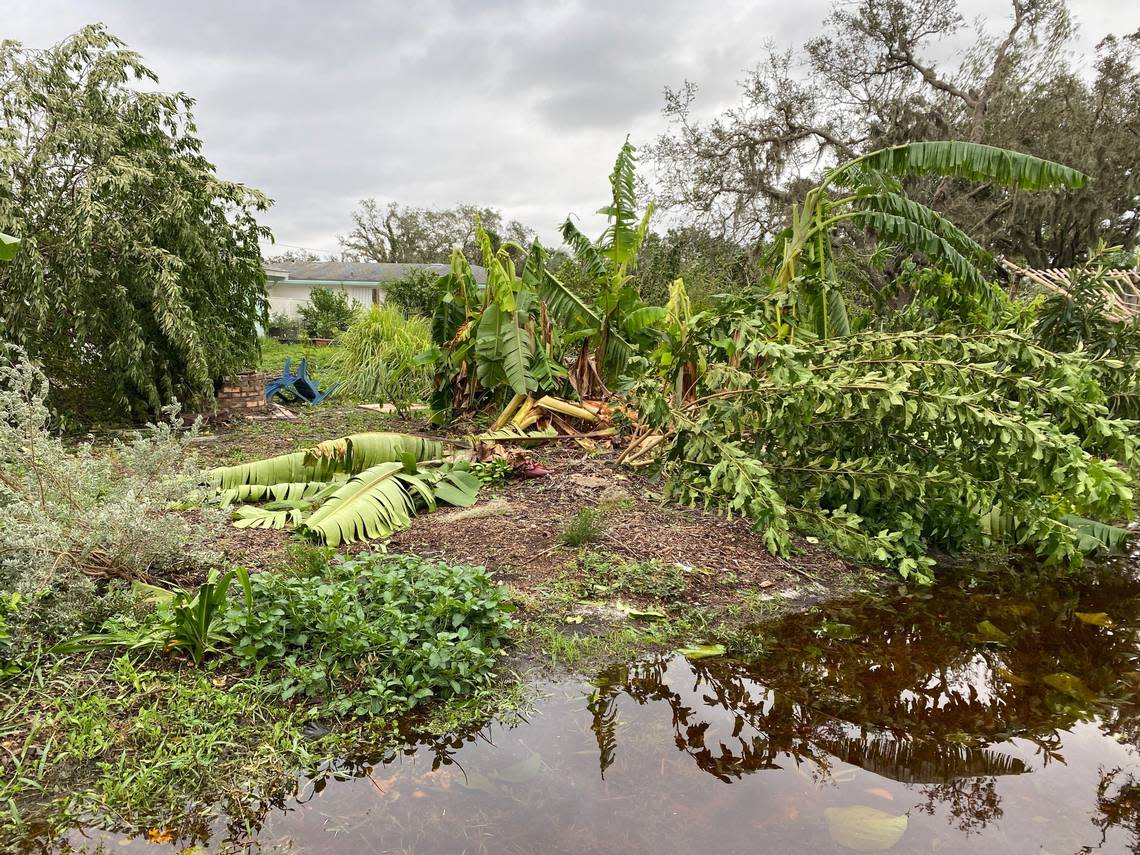 At Sulcata Grove, a food forest in Sarasota about three miles from DeSoto Lakes, two live oaks and several fruit trees were uprooted in the hurricane’s wake. During the hurricane, the avocados, loquats and white sapotes rested in the flooded soil. Their roots are now susceptible to rot. Farm owner Celeste Welch bides her time.

“Nature is something that we just have to work with,” she said.

In January, many crops at the nursery, including mangoes, succumbed to the cold. The bananas recovered from the freeze, but the wind battered them down.

Welch applied for aid through the Tree Assistance Program and the Noninsured Crop Disaster Program through the U.S. Agriculture Department and received no assistance with the freeze. Now, she is doubtful she will for the hurricane.

But Welch remains optimistic. She aims to replace the uprooted avocados and mangoes with new varieties. She and her family righted downed trees and staked them against two-by-fours. And along the toppled oaks, orchids grow. Welch plans to nourish the lavender vines in remembrance of the storm.

“When you see the trees fall, it’s part of Florida’s history,” she said. 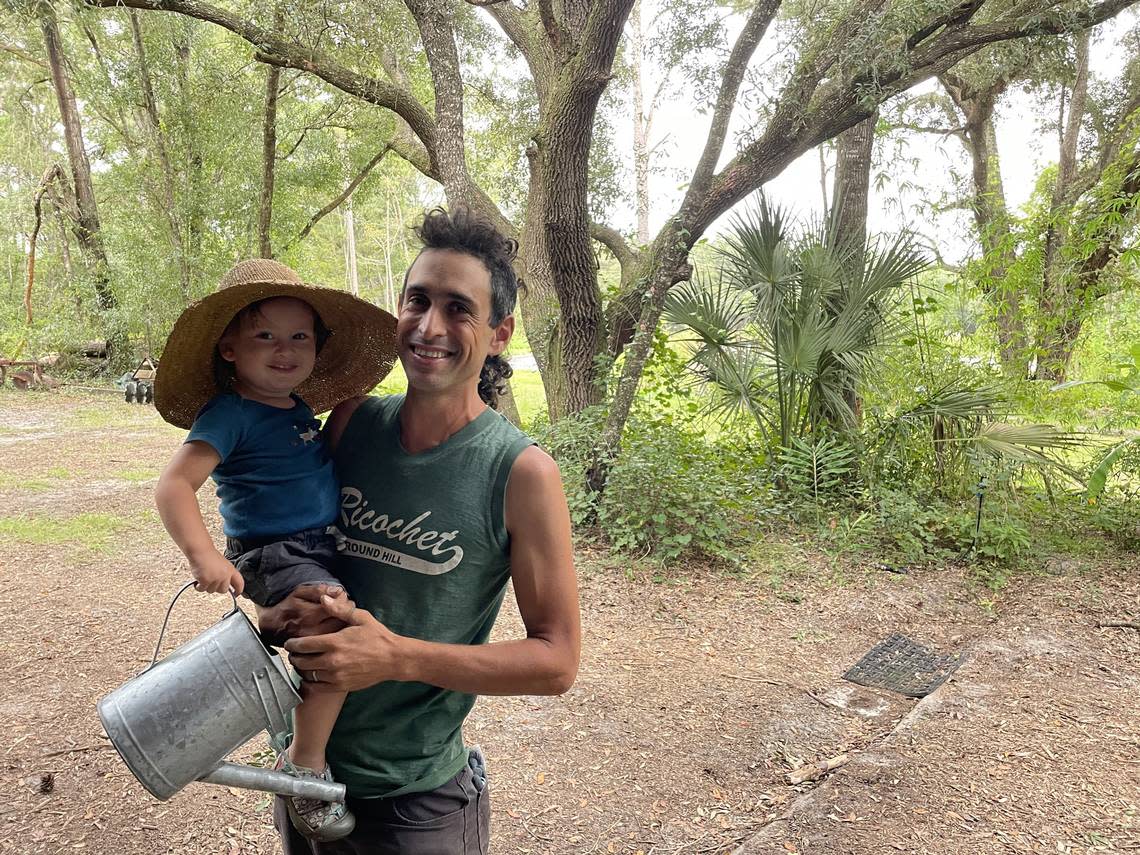 Despite the mild climate, hurricanes are among the downsides to farming in Florida, said Gainesville farmer Daniel Robleto. He grew up in Palm Beach County and recalls beloved trees falling.

“There’s so many times where [farming] is just really empowering and awesome,” he said, “and then I’m kind of like, ‘Why did I choose this?’ ”

When Hurricane Matthew grazed the East Coast in 2016, Robleto farmed in Palm Beach. He said he peeked through the boarded windows and saw the wind tousle the greenhouse. At the time, the lettuce and crops were sandblasted, perforated like needle pricks, he said. But most survived.

“I remember we had arugula ready to pick, and we were still able to pick it after the 70 mph winds,” Robleto said.

Prior to Hurricane Ian’s landfall, a handful of volunteers helped Robleto prepare Nicoya Farm. They placed tarps over unplanted soil to prevent weed growth and hardened clay from the rain, tied tomatoes and peppers to a trellis and housed seedlings in the barn, he said. His crops faced minimal damage.

For Southern Fresh Farms, volunteers will be essential, McMahon said. After Hurricane Irma hit in 2017, about 40 people gathered at the farm to assist with the flooded land.

This week, more than 100 people donated $21,050 on the online fundraising site GoFundMe. McMahon said people have arrived at the property in droves.

“There’s hardly any words to express your gratitude,” he said. “It always, always puts your hope back in humanity at times like that.”

They begin with brooms in hand and sweep one dustbin of debris at a time.

This story was produced by Fresh Take Florida, a news service of the University of Florida College of Journalism and Communications. The reporter can be reached at [email protected]. You can donate to support our students here.