When Victoria went into a strict lockdown to counter the global pandemic, Prime Minister Scott Morrison invoked the spirit of JFK, stating: “We are all Melburnians now when it comes to the challenges we face." How quickly that spirit evaporated. 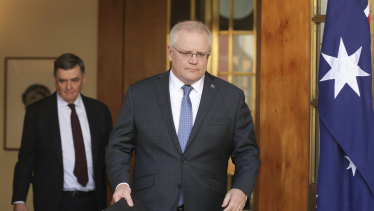 The Prime Minister has reverted to type.Credit:Alex Ellinghausen

The Prime Minister has reverted to type.

Instead of backing Premier Dan Andrews’ detailed road map to COVID-normal released on Sunday, the Prime Minister described it as “hard and crushing news for the people of Victoria”.

The Prime Minister said that the road map is “a Victorian government plan”. Implying it has nothing to do him.

Yet Daniel Andrews is implementing a road map based on the national cabinet agreed suppression strategy.

It is a road map to suppress the virus by the elimination of community transmission in Victoria, based on expert modelling.

Given the Prime Minister is distancing himself from Victoria’s road map to COVID-normal, perhaps he would like to share his plan to defeat the pandemic.

How many Victorians is Morrison prepared to let die a lonely, painful death in order to prematurely open borders and the economy?

Ignoring the fact that suppressing the virus in Victoria is in the interests of all Australians, the Prime Minister is sniping from the sidelines, fuelling division and community angst.

We are again reminded of his failure of leadership during the bushfires that devastated the east coast of Australia in January.

During the bushfires the Morrison government ignored warnings from Emergency Management Australia and former fire chiefs about the pending disaster, and at the height of the crisis, as Australian citizens huddled on beaches to escape the furnace, played blame-game politics with the NSW government.

Near the conclusion of her Quarterly Essay on Morrison’s leadership through the pandemic, written before Premier Andrews announced Victoria’s COVID-normal road map, Katharine Murphy queried if the Prime Minister will have “the capacity to hold a country together through a crisis on this scale?”

She wrote, “Will his guiding light be the pragmatism that has been largely on show during the pandemic – a spirit of building and fortifying in the national interest – or will he revert to old, tribal habits if the level of adversity deepens?”

Sadly, the answer is the latter. The Prime Minister has demonstrated he is done with national unity and national leadership. Tribal politics rules.

Premier Dan Andrews is leading Victoria through a social and economic crisis of epic proportions. Lockdown two is working. The infection numbers are trending down.

This is good news for all Australians.

Yet the Prime Minister continues to undermine Andrews’ efforts. In a media conference on Monday, Morrison claimed that under Victoria’s road map infection thresholds “Sydney would be under curfew now”, ignoring the fact, as Victoria’s Chief Health Officer Professor Brett Sutton pointed out, that Victoria requires harsher rules because we have higher community transmission rates.

Morrison is not the leader for our times. He praises the virus response of the Coalition government in NSW and attacks Labor states.

He has shirked responsibility for the devastating impact of COVID-19 in aged care. The Commonwealth is 100 per cent responsible for the funding and regulation of aged care and despite the horror of what we saw in Italy and the US last year the Morrison government had no rapid response plan for the sector.

From the beginning of this crisis, the Prime Minister has been slow to react and to lead by example.

When Premier Andrews made the dramatic decision to cancel the grand prix in March, Morrison was sending mixed messages – banning non-essential gatherings of 500 plus people and then announcing he was going to the rugby on the weekend before the ban kicked in.

Now he’s lamenting the hit to the federal budget, calling for state borders to be opened and cutting Victoria loose.

Perhaps he would have more empathy if he lived in Melbourne. It is tough here. We are living with restrictions unimaginable this time last year. Curfews, masks, working from home if you are one of the lucky ones who still has a job. Frontline workers daily putting their lives, and those of their loved ones, at risk.

We will get through this. We have done it before, and we don’t want to have to do it again. Which is why we need to get infection levels down to manageable levels. Australia cannot open up until we have the virus under control in Victoria.

Technically, restrictions can be ended with the stroke of a pen but that premature measure will only put Victorians – especially our health workers – at risk of a third wave of the virus.

Back in July the Prime Minister said, “there is always the risk” that what is happening in Melbourne now “could happen in other cities".

In that instance, Scott Morrison was dead right.

Steve Bracks is a former Labor premier of Victoria.