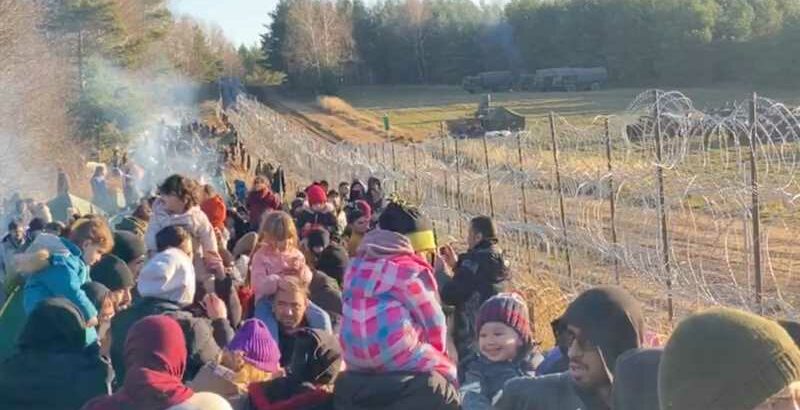 Thousands of migrants are enduring freezing conditions at the Belarus-Poland border in the hope of a better life inside the EU.

Two groups of migrants, mainly from Iraq, Syria and parts of Africa, are reported to have made it into Poland from Belarus – only to be detained immediately after crossing the border.

Belarusian President Alexander Lukashenko is accused of giving migrants tourist visas and helping them enter the bloc illegally as a way of taking revenge on the EU for sanctions imposed after he won a disputed election last year.

Officials in Brussels say such “gangster-style” tactics are inhumane and exploitative.

Russia, Belarus’s main ally, denies the allegations and is blaming Poland for not handling the crisis properly.

Here Sky News looks at where the dispute began and what is happening now.

What is happening at the border?

There are currently thousands of migrants assembled along Belarus’s western border with Poland.

Most of them have fled war-torn areas of Iraq and Syria, though a small number have come from Africa, in search of a better life. The majority are young men, but there are some women and children.

Usually, asylum seekers from these Middle Eastern countries who want to come to Europe do so by making dangerous boat trips from northern Africa across the Mediterranean before trying to enter the bloc via western Europe. But the EU has accused President Alexander Lukashenko, of providing them with an easier route, by offering them Belarusian tourist visas – and then helping them cross the border into either Poland, Lithuania or Latvia – the three EU states it borders.

So far this year, around 4,100 asylum seekers have entered Lithuania illegally via Belarus – 50 times more than the whole of 2020.

Latvian officials started pushing migrants back from its Belarusian border this summer, but several hundred are believed to have got through. They declared a state of emergency to deal with the crisis, a move Poland made in September when experiencing the same problem.

On 9 November Poland reinforced its border by deploying more than 12,000 soldiers to help protect check points after a group tried to storm a barbed wire fence.

Officials have also accused Belarusian soldiers on the other side of firing shots into the air. Temperatures at the border have recently dropped below freezing and at least seven migrants have died of hypothermia as they wait to make the crossing.

Migrants have told Sky News they have faced violence at the hands of multiple authorities on their journeys to the EU.

Why is Belarus ‘seeking revenge’?

Alexander Lukashenko has been in power in Belarus since 1994.

A former member of the Soviet Army, he relies heavily on Russian support and is often referred to as ‘Europe’s last dictator’. In August 2020 he won another national election with an overwhelming majority.

The vote was widely condemned as rigged. It sent opposition leader Sviatlana Tsikhanouskaya into exile in Lithuania and triggered huge protests across the country.

In response, the EU imposed economic and political sanctions on Belarus, for what it describes as “violence and falsification” surrounding the election.

Further measures were imposed in May after a Ryanair flight from Greece to Lithuania was grounded in Belarus’s capital Minsk so that opposition journalist Roman Protasevich and his girlfriend could be arrested.

Although Mr Lukashenko denies forcing the plane to land, the move was heavily condemned by the international community and further fuelled tensions in the region.

What has the EU said?

When migrants began to arrive in Belarus in August, the EU accused it of “attacking” the bloc by means of illegal immigration. “This is part of the inhuman and really gangster-style approach of the Lukashenko regime that he is lying to people, he is misusing people, misleading them and bringing them to Belarus under the false promise of having easy entry into the EU,” a spokesperson said in a statement. The warning was echoed by members of the UN Security Council at an emergency meeting on 11 November.

A joint statement by the US, UK, France, Albania, Estonia and Ireland accused Belarus of putting migrants’ lives at risk and trying to “divert attention away from its own increasing human rights violations”.

Reuters reports that the EU could impose a fifth wave of sanctions as soon as Monday, which would take the number of people under asset freezes and travel bans up to 200.

Other possible measures include stopping international airlines with migrants on board landing in the Belarusian capital.

Turkish Airlines has already banned citizens from Iraq, Syria and Yemen from flying to Belarus.

What is Belarus doing now?

On 11 November, Mr Lukashenko warned he will respond if the EU decides on fresh sanctions.

He threatened to cut off supply to the Russian gas pipeline that runs through Belarus and into the EU.

“We are heating Europe and they are threatening us,” he said. “And what if we halt natural gas supplies. Therefore I would recommend the leadership of Poland, Lithuanians and other empty-headed people to think before speaking.”

Some observers say these threats cannot be taken seriously as it would have to be approved by Russia first – and would see Belarus have to give up the considerable funds its receives for transporting the gas.

But others are concerned he could go through with it and risk worsening global natural gas shortages.

Mr Lukashenko has also called on Russian President Vladimir Putin for support, with reports of a phone call between the two leaders emerging earlier this week. 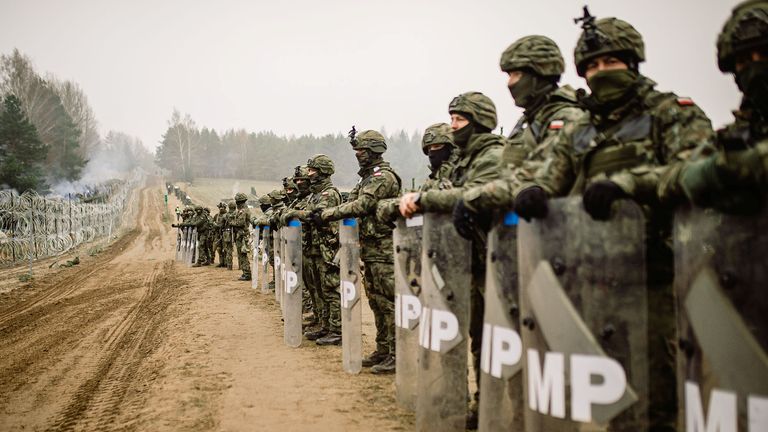 In response, Mr Putin has convened an operational meeting of the Russian security council over “state border policy” and Belarus’s foreign minister Vladimir Makei has travelled to Moscow for talks with his counterpart.

Russian foreign minister Sergei Lavrov has suggested that the EU should pay Belarus to deal with the migrants.

A similar settlement was made with Turkey in 2015, which saw the 27-country bloc agree to a £5bn deal to help President Recep Tayyip Erdogan stem the flow of migrants into the EU.