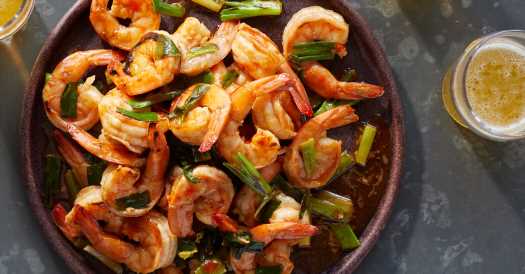 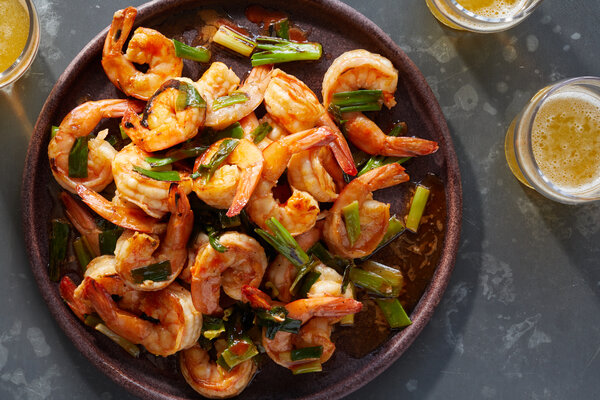 Good morning. Happy Halloween. I’m not much for spooky high jinks, much less candy corn or miniature Milky Ways, but this afternoon I’ll put on my mask to hand out Snickers bars to the little dinosaurs and Ted Lassos all the same, before a dinner of hot-sauce shrimp (above), dirty rice, braised greens and cornbread. We’ll have the last of the holiday candies for dessert, clean up and watch “Succession.”

As for the rest of the week, I’d like to get started with this vegan tantanmen with pan-fried tofu for dinner on Monday. While it’s great as is, I’m not vegan myself, so I’ll use chicken stock to make it and add a jammy, soft-boiled egg to the bowl at the end. That’s a nice meal, especially with a big, honking spoonful of chile crisp or XO sauce added at the table.

For Tuesday’s meal: farro and cauliflower Parm, crisp-melty and delicious, with an iceberg salad dressed with halved cherry tomatoes marinated in red wine vinegar, olive oil, salt and lemon pepper. I do love that salad.

Wednesday night, I’m thinking, could be really good for this mushroom wafu pasta, topped with shredded nori. But I wouldn’t look sideways at middle-school tacos if that’s what jumps your battery, or a fast spaghetti Bolognese.

For Thursday, take a look at this garlic-braised chicken, which has an earthy kick from the addition of a fair amount of white pepper. Warm some bread to go with that if you can.

And then on Friday, you can run out the week with a cook’s choice: either this crispy salmon with mixed seeds (yogurt helps bind them to the fish) with an herb salad; or Korean barbecue-style meatballs, excellent with rice and plenty of kimchi.

There are thousands and thousands more recipes to cook this week awaiting you on New York Times Cooking. Subscribe today in order to access all of them, and to use all the features on our site and apps. Subscriptions allow us to keep doing this work that we love. Thank you if you’ve taken one out already.

And we’ll be standing by like docents or the ski patrol, should anything go wrong along the way, either with your cooking or our technology. Just write the team at [email protected] Someone will get back to you, I promise. (You can also write to me: [email protected] I read every letter sent.)

Now, it’s a far cry from talk of Chablis and Belon oysters, but I liked Emily Hilliard’s story in Oxford American about the invisible landscape of the writer Breece D’J Pancake’s hometown in West Virginia.

Also from the wayback machine: Here’s Sarah Vowell in 2007 on “This American Life,” telling the story of a 19th-century cartographer named Charles Preuss, who accompanied the explorer John Frémont on a number of expeditions across the American West. He hated almost every minute of it.

Finally, and in keeping with the historical theme, here’s Chet Atkins playing “Dark Eyes” in the 1950s, live on the television. Enjoy that, and I’ll be back on Monday.