The relationship between the US president and the PA has been nothing less than a roller coaster ride, analysts say. 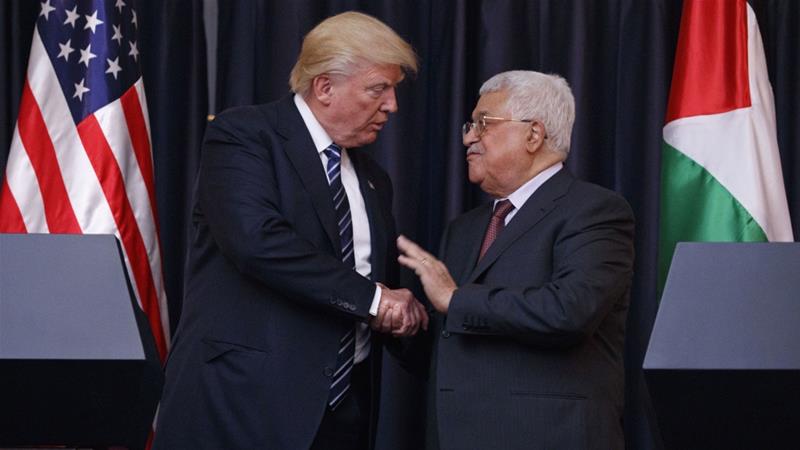 Washington, DC – The relationship between the Palestinian Authority (PA) and the administration of US President Donald Trump has climbed, dropped, rocketed and nosedived, all within the span of a single year.

Now on an uneasy plateau, the two sides are barely on speaking terms, due in large part to the US recognition of Jerusalem as Israel’s capital and Washington’s plans to move its embassy from Tel Aviv to the Holy City, reversing policy dating back to President Harry Truman’s administration.

The roller coaster ride began after Trump became the unlikely winner of the 2016 US presidential election.

Palestinians feared that they were being shunned by his administration when it emerged that the billionaire tycoon’s leading peace process advisers were staunch Israel supporters with various ties to settlement groups.

But these early concerns of isolation were dispelled by phone calls exchanged and meetings held between Trump and PA President Mahmoud Abbas.

At that time, the PA viewed Trump’s lack of political experience and minimal grasp of foreign policy as an opportunity to breathe new life into the peace process, moribund since Barack Obama’s last years in office.

Trump’s bombastic speeches and vows to solve the decades-old conflict, coupled with his initial reluctance to move the US embassy in Tel Aviv to Jerusalem, also boosted Palestinian hopes that his non-conformist ways might actually yield some tangible results.

“When we received a phone call [in March 2017] from President Trump, that phone call ended speculations about the [lack of] contacts [between the PA and the US administration],” said Husam Zomlot, head of the Palestine Liberation Organization’s (PLO) delegation to the US.

“To our absolute surprise”, Trump told Abbas that he is “committed to a vision of peace … that he has been watching this conflict since he was a child and that he thinks that it’s senseless and it must end,” Zomlot recalled.

“He said, ‘I am going to intervene, I want to be a fair arbitrator.'”

The Palestinians voiced optimism that the new president, known for straying from the orthodox methods of past US leaders, may be able to deliver what he called the “ultimate deal”, as the PA sought to present itself as a vital security bulwark against Hamas and even the Islamic State of Iraq and the Levant (ISIL, also known as ISIS) group, which has little-to-no foothold in the Palestinian territories.

“Palestinians recognise that the US sees the PA primarily through a security prism, so PA officials have always stressed the quality of their security cooperation with Israel, as well as the importance to regional stability of a moderate PA leadership,” said Nathan Thrall, author of The Only Language They Understand, a new book on the conflict.

“Just as Israel cites the prospect of a Hamas takeover of the West Bank to justify continuing to occupy the territory, the PA cites the same prospect to continue receiving external support from the US and others,” Thrall said.

Cooperation between Israel and the Palestinians in security terms in enshrined in the 1993 Oslo accords. Today, the PA employees more than 65,000 security personnel in the occupied West Bank and Gaza Strip, and in 2014, security accounted for a third of its budget.

According to Majid Faraj, head of the Palestinian intelligence service, Palestinian forces thwarted 200 attacks against Israel between October 2015 and January 2016 alone, adding credence to criticism that the PA acts as a sub-contractor for Israel’s occupation of Palestinian territory.

From the outset, the US administration was vague about its plan to mediate between the Israelis and the Palestinians.

In February 2017, Trump said he can “live with either” a one-state or two-state solution to the conflict. “I’m very happy with the one that both parties like,” Trump said, as he hosted Israeli Prime Minister Benjamin Netanyahu at the White House.

The PA looked for a silver lining in the little assurances Trump provided, as public disillusionment in the occupied West Bank and Gaza Strip ran high, with as many as 70 percent of Palestinians saying they wanted Abbas to resign.

“The leadership was happy to hear [Trump’s] vague language about starting a process as that goes also in harmony with the two-decade-long approach of the PA,” said Alaa Tartir, programme director of Al Shabaka, the Palestinian Policy Network. “Engaging in a process offers them much-needed legitimacy and implies that they are a player in that process.”

Trump’s support for the two-state solution, which has long been the hallmark of US peacemaking in the region, was murky at best, but some observers said the PA had very little choice but to play ball.

“They couldn’t afford not to engage and be positive because they didn’t have any other cards to play. They had placed all their eggs in the American basket,” said Omar Baddar, deputy director of the Washington-based Arab American Institute.

“They played the negotiating game hoping they would get rewarded eventually with US pressure to end the Israeli occupation,” Baddar told Al Jazeera.

“It was worth taking a chance before they turned back on any American-led peace process under the Trump administration and I think they finally reached that conclusion.”

This came in the lead-up to the US recognition of Jerusalem as Israel’s capital on December 6, a move rejected by much of the international community. The decision was a death knell to the two-state solution, which Palestinian leaders had been exploring (and later supporting) since the 1970s.

Without mincing his words, Zomlot, the PLO’s envoy to Washington, said the move, coupled with Trump’s announcement that the US embassy would be moved to Jerusalem, amounted to “back-stabbing”.

For more than two decades, successive presidents deferred any such decision on Jerusalem, instead designating it a final status issue that should be negotiated between the Israelis and the Palestinians. Moving the US embassy was a promise Trump made during his election campaign, but many candidates before him had made the same vow, only to quietly backtrack once in office.

Zomlot acknowledged that the administration’s lack of a clear-cut commitment to the two-state solution made the Palestinian leadership doubtful throughout, but they chose to give the new president a chance.

The Palestinian response to the Jerusalem announcement was swift: Abbas refused to invite Vice President Mike Pence to Ramallah during his four-day visit to the region, as the PA made it clear it will no longer accept the US as a sole broker.

“Jerusalem is and will forever be the capital of the Palestinian state,” Abbas declared during a meeting of the Organisation of Islamic Cooperation (OIC) in Istanbul in December. “We do not accept any role of the United States in the political process from now on, because it is completely biased towards Israel.”

As the PA explored alternative strategies that focused on a multilateral approach to ending the conflict, Abbas took the battle to the UN, where the General Assembly voted overwhelmingly to reject Trump’s recognition of Jerusalem as Israel’s capital. He also addressed the Security Council, calling for a Middle East peace conference that, as an alternative to US-led talks, would recognise Palestine as a fully-fledged, UN member state.

Trump’s retaliation to what he labelled the PA’s “disrespect” included threats to cut aid until the leadership returned to negotiations. Washington had already withheld $65m – a sum that could possibly rise to $290m – in coffers slated for the UN agency that provides Palestinian refugees with basic services.

Meanwhile, the PA is planning to join several international organisations – a move it had previously deferred to give the Obama administration’s diplomacy a chance. But the leadership has not ceased its security cooperation with Israel, or dissolved the authority, and remains committed to negotiations and a two-state solution that eschews violence as a means to ending Israel’s occupation.

“At this point, I think the only option they have left is to internationalise this issue … to seek mediation through the UN and to go through international institutions like the [International Court of Justice] or others,” Baddar said. “It’s very possible that [security cooperation] is the last thing that the PA is holding on to as a means of leverage on the Americans and the Israelis.”