Berlin, Germany – As some countries across Europe entering the so-called second wave, there are some that appear to be – at least for now – bucking this trend.

Spain, France and the UK have been witnessing a significant spike in daily coronavirus cases after a period of lower numbers.

According to the World Health Organization (WHO), in the past 24 hours, the UK has reported 14,542 cases and France 10,479, while the Czech Republic, widely-praised for containing its first outbreak, was placed back under a state of emergency this week as cases soared. It reported 4,456.

By comparison, Italy – whose population is six times larger than the Czech Republic’s, has reported 2,677, Germany is at 2,828, and no new cases have been recorded in Sweden.

Analysts say expert-led measures, better compliance and learning from past mistakes are helping some nations manage the virus.

“There is no hiding the fact when looking at the numbers in France compared to Germany or Italy, that something different is going on right now,” Amr Aswad, a virologist and Einstein Postdoctoral Fellow at the Freie University in Berlin, told Al Jazeera. “There are many variables around policy and social and cultural dynamics that can play out in a country and, while it isn’t always useful to compare countries, they can serve as a warning to not become complacent.” 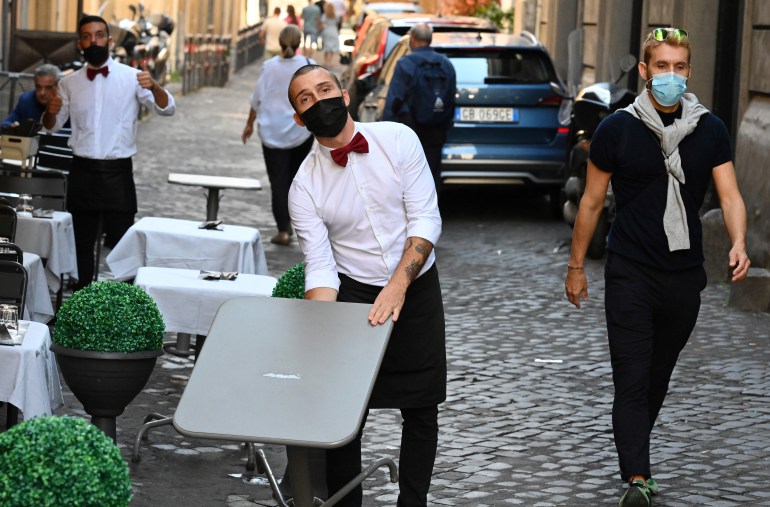 A waiter wearing a face mask sets up tables outside a restaurant in downtown Rome on September 25 during the COVID-19 pandemic. Italy, hit hard by the first wave of the coronavirus, is today an exception in Europe with a limited number of new cases, a result of strict anti-COVID measures [Vincenzo Pinto/AFP]Italy was convulsed by the early outbreak of the pandemic –  the media carried constant images of body bags and headlines screamed in a panic over daily death tolls nearing 10,000, spreading alarm across the region. A strict lockdown followed.

Flavia Riccardo, an epidemiologist at the Istituto Superiore di Sanita (Italian National Institute of Health) in Rome, told Al Jazeera that authorities used the time they gained from the lockdown “to prepare for a 360-degree approach”.

Riccardo says gradual re-openings from May onwards, where a number of rules were issued to businesses, including on personal hygiene, hand washing and tracking people by making sure to record their names and phone numbers, have also helped.

“It has taken a huge effort to ensure this, but everyone complied in order to reopen their business,” she said. “We have also increased our capacity to test, and nowadays we have more than 100,000 molecular tests performed on most days.  Across the board, the communication – from the technical to the political level, to the citizens – has been quite consistent and people have compiled and changed their behaviours very quickly.” 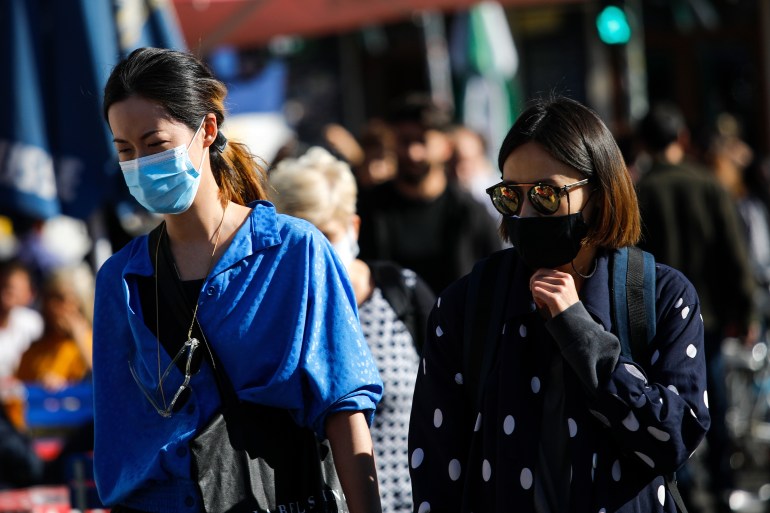 People wearing protective face masks at a vegetable market in Berlin on September 18, 2020 [David GANNON/AFP]Compared with Italy, Germany’s fatality figures have been much lower, approximately 9,000 compared with nearly 36,000, with analysts putting this – in part – down to a higher number of ICU beds and more testing.

Other measures have included a gradual reopening of schools and restaurants, a track-and-trace system, plus a tracing app that, according to authorities, has been used to send 1.2 million test results from labs to users during the first 100 days from its launch in June.

As Aswad says: “There may not be anything particularly unique in Germany about the interventions such as mask-wearing or local lockdowns, but perhaps there are differences in compliance compared to other countries. I also think there are cultural differences in the way people interact with one another and how public and private spaces are set up.

“My impression is that people and businesses, on the whole, are sticking to social-distancing guidelines quite well. Even now you’re not allowed to walk around a restaurant without a mask and you don’t see many people without masks on when travelling on the underground, and large businesses are quite strict about not letting people in without them. At least from an attitude perspective, most people realise that there’s a lot of caution that needs to be taken.”

Compliance, analysts say, has been a key factor in Sweden too.

The country’s seemingly lax approach to the pandemic has drawn international attention. It has tried to slow down the virus instead of attempting to stop it –  schools, restaurants and bars remained open, and masks measures were not enforced.

While cases are now slowly rising, levels are much lower than they were earlier in the year.

Helena Nordenstedt, an associate professor of Global Health at Karolinska Institute in Stockholm, said: “At the height of the pandemic in Stockholm, we had 1,100 patients admitted at the same time, now there are 25 people in Stockholm hospitals, so there is a huge difference.

“I think the most important part of the strategy is consistency. We have been given recommendations rather than rules, and these have been coherent and, aside from some small changes, these have not changed that much. And therefore it’s easy for people to adjust. People have not been getting tired of rules and recommendations changing all the time and there’s not so much complacency because people are not being forced to comply with something that they don’t necessarily agree with.” 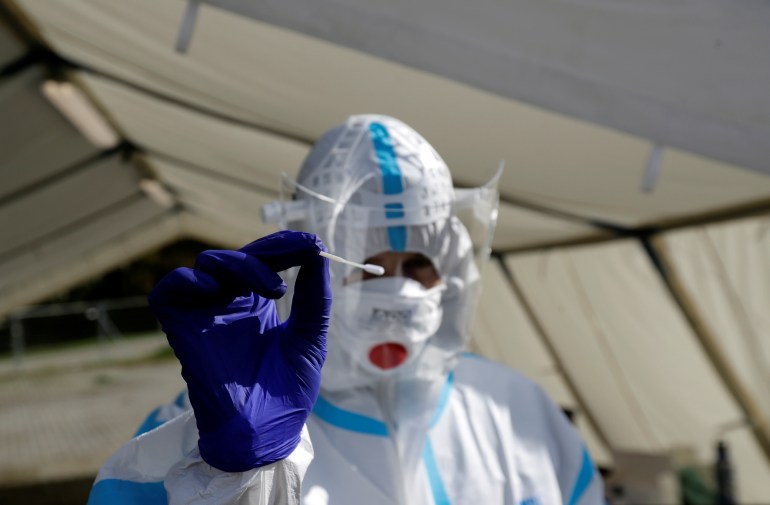 A medic wearing a protective suit holds a swab while testing people for COVID-19 at a newly opened drive-in testing station in Prague, Czech Republic, October 7, 2020 [David W Cerny/Reuters]This expert-led response, Nordenstedt says, has been carried out by the Public Health Agency as opposed to the government, and has been proving popular with the public – a recent poll shows public trust in the response at more than 70 percent.

With cases rising as the continent edges towards winter, experts say that while there is no magic solution, eight months into the pandemic, there are tools that those leading the response can now draw on.

As Aswad says: “Federal policymakers and local governments now have an arsenal of ‘pandemic tools’ that have been tried and tested and tweaked over the last few months. I don’t think there’s going to be any major new strategies because nothing has fundamentally changed about the virus. However, we know a lot more than we did in March, with the effectiveness of masks being a prime example. Going forward, I expect that cities and states around the country will be reaching into their bag of tricks to help curb the effect of large outbreaks, and a full quarantine needs to remain on the table as a fail-safe.”

On Wednesday, as cases ticked up, Italy made masks mandatory outdoors and extended a state of emergency. During the initial outbreak, Italy imposed one of the world’s strictest lockdowns.

Riccardo said: “The future trends will define whether we might need to activate other measures or not. So it’s really very much navigation and modulating as we go.

“We’re happy to be attentive right now, to monitor what’s going on and to take the earliest possible corrective measures, because the last thing we want is to go back to where we were in March.” 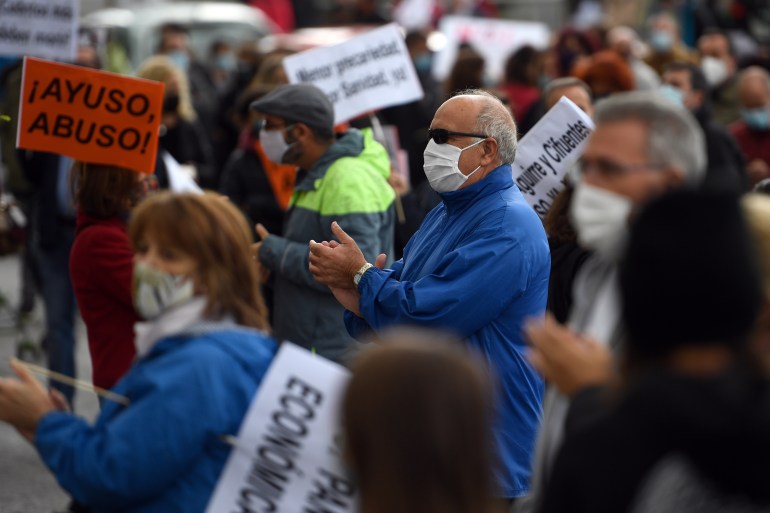