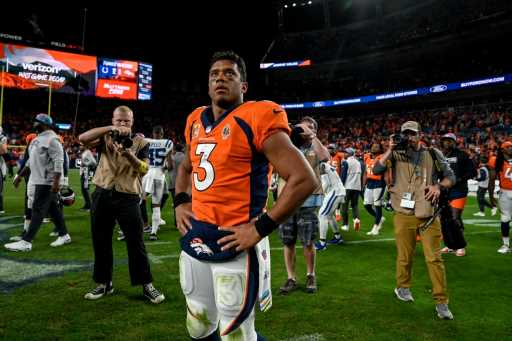 You could almost make out the sound of Pete Carroll cackling from 1,300 miles away. The way a used car salesman cackles when a lemon leaves the lot.

Al Michaels, the consummate pro, could barely contain his guffaws while his microphone was hot. Kirk Herbstreit was still shaking his head in the press elevator Thursday night during the descent to field level, no doubt planning his escape to some other football town. A land where the natives don’t want to duct tape their season tickets to a cinder block and fling them straight into the Rio Grande gorge.

The coach looks in over his skis. The roster is withering like an autumn leaf. The general manager sold the farm for a quarterback who keeps repeating all the bad stuff of Broncos quarterbacks over the past five years.

Russell Wilson is the Broncos’ $245-million yacht. Right now, it feels as if that schooner’s been hijacked by a 16-year-old.

At 2-3, this ship’s already taking on water. If you can’t fix the boat, it might be time to change the skipper.

We’re not even to Columbus Day yet, and the defense looks beat up and pooped out. Especially after having to chase Lindsay (40 rushing yards on 11 carries) and fellow Indy tailback Deon Jackson (62 rushing yards) around all night.

“Yeah, you had conversations (with old teammates) on the field,” Lindsay said, grinning wickedly after coming off the bench to post 54 total yards. “It felt good. It felt like (we were back) in practice. Like I never left, you know?”

How bad did No. 30 want this one? While the Broncos nursed a 6-3 lead at halftime, Lindsay, who put up back-to-back 1,000-yard rushing seasons for the Broncos in ’18 and ’19, rallied his new Colts teammates inside the visiting locker room.

“He was just saying, that, ‘We’ve got families to feed. Let’s go do what we do, what are we messing around for?’” recalled Indianapolis linebacker JoJo Domann, the former Pine Creek High standout and Nebraska Cornhuskers stopper.

“(Lindsay) was just like, ‘Let’s kick it into gear.’ I mean, we both wanted to win this (one) a little extra.”

Meanwhile, the more Wilson seems to want it, the worse things seem to get. According to the NFL’s NextGen Stats, the Broncos’ newest franchise signal-caller was 2-for-15 with two interceptions on passes that went for 10 yards or more through the air.

Opposing defenses have pretty much sussed out coach Nathaniel Hackett’s passing game: Smother Courtland Sutton (11 targets, five catches, 74 yards) and dare somebody else to either get open or beat you.

Jerry Jeudy, for all that route-running precision, all that social media strutting, is a non-factor, another John Elway bust. KJ Hamler is still trying to get his knees and his head space sorted out at game speed. Eric Saubert (five catches, 36 yards) is your best tight end by default, because Andrew Beck (one target) drops catchable balls in the end zone and Albert Okwuegbunam (one catch in Week 5 after playing one snap in Week 4) can’t get on the field.

No doubt. But the clock’s ticking, Russ. And the doubters are howling. Carroll’s Seahawks go into the weekend with the second-worst scoring differential (negative-20) in the NFC. Yet the worse you play, the smarter he looks.

It’s ironic, isn’t it? The Broncos have a weekend off to lick their wounds just as the Great American Beer Festival returns to our shores. Because to paraphrase that country song from a few years back, Denver is officially a drinkin’ town with a football problem.