A white couple was arrested after at least one handgun was pulled on a Black woman and her daughters during a videotaped confrontation in a restaurant parking lot in Michigan, authorities said Thursday.

The confrontation was captured on cell phone video.

Takelia Hill, who is black, told the Detroit Free Press that her daughter asked Wuestenberg to apologize after she bumped into her outside of a Chipotle in Orion Township, about 40 miles outside of Detroit, but Wuestenberg instead started to yell at her. 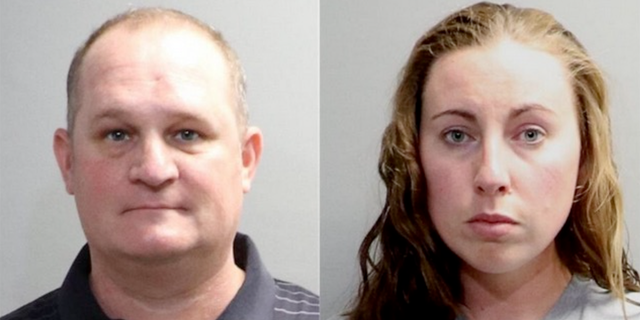 The video shows Wuestenberg get in her car after the tense back and forth that included accusations of racism. Her husband, who was still outside the car, says, “Who the f—do you think you guys are?" to the family. One of the girls accuses him of being “racist” and “ignorant" and he walks back to the car.

“You can not just go around calling white people racist,” Jillian Wuestenberg says from the passenger seat. “White people aren't racist…I care about you.”

As their car pulls out, Hill taps the back window. She later told the Detroit News she thought the driver was going to hit them.

Wuestenberg then jumps out and pulls a gun on the family and screams for them to “Get the f— back!”

One of the girls calls for someone to call the police.

Wuestenberg then lowers the gun, climbs into the passenger seat and the vehicle drives off.

“So this is America,” Hill wrote on Facebook afterward. “I’ve never in my life had a gun pulled out on me. … I’ve never felt so helpless in my life I’m so shaken up.”

“It is an unfortunate set of circumstances that tempers run high over, basically, not much of an incident,” Cooper said of the initial alleged spark that caused the confrontation.

“We don’t see sides. We see facts,” he said. “There’s a lot of tension in our society, a lot of tension among folks and people with each other. I would just say this, we are asking and expect our police — and rightfully so — to deescalate every situation they possibly can, and we should be doing that. But I would say that needs to happen with us individually in our own lives and situations, that we interact with each other and deescalate those moments.”

Deputies seized two handguns from the Wuestenbergs when they were detained Wednesday night. Both have a concealed carry license.

It’s not clear if the Wuestenbergs have a lawyer who can comment for them.