The suspension comes after a heated confrontation between Acosta and President Donald Trump during a news conference on Wednesday, local time.

They began sparring after Acosta asked Trump about the caravan of migrants heading from Latin America to the southern US border.

The back-and-forth between quickly grew heated after the reporter challenged Trump's characterisation of the caravan as an "invasion" and asked why the president had "demonised" immigrants in a widely criticised ad rejected by networks. Trump told Acosta that he should "let me run the country" and Acosta should "run CNN."

When Acosta tried to ask further questions, Trump became angry, demanding that the reporter sit down and give up the microphone. Acosta refused. Trump backed away from his podium and briefly paced the stage.

On Wednesday night, local time, Sanders released a statement accusing Acosta of "placing his hands on a young woman just trying to do her job as a White House intern," calling it "absolutely unacceptable".

She said his press pass was being suspended "until further notice." 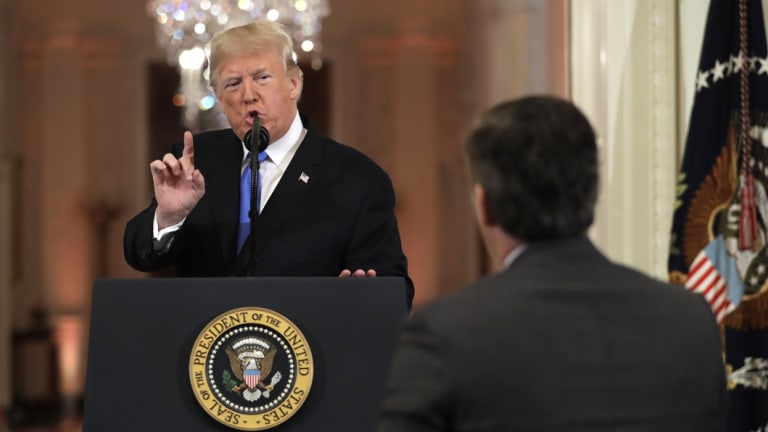 "President Trump believes in a free press and expects and welcomes tough questions of him and his Administration," Sanders said in a statement. "We will, however, never tolerate a reporter placing his hands on a young woman just trying to do her job as a White House intern. This conduct is absolutely unacceptable. It is also completely disrespectful to the reporter's colleagues not to allow them an opportunity to ask a question."

On Twitter, Acosta responded to Sanders' statement with, simply: "This is a lie."

At the press conference, NBC News reporter Peter Alexander tried to stand up for Acosta, saying he was a "diligent reporter." Trump responded: "Well, I'm not a big fan of yours, either."

CNN did not immediately respond to a request for comment.