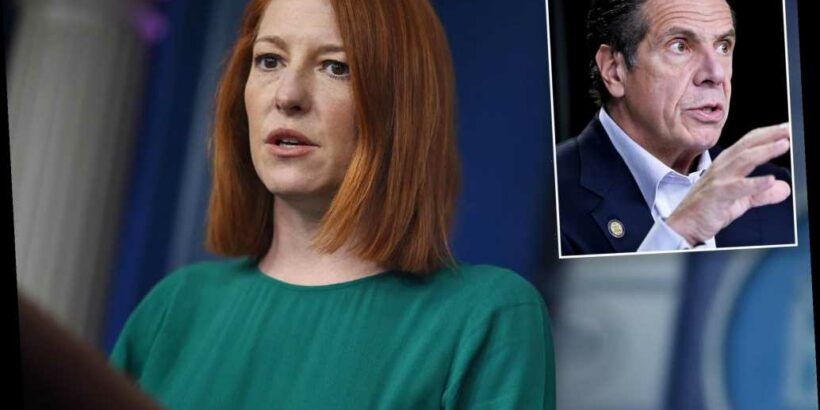 Cuomo gets ego massage – but no vax – during no-press appearance

A reporter pressed Psaki at her daily press briefing on why the beleaguered Democrat is still leading the weekly White House pandemic calls in his role as chair of the National Governors Association, particularly after reports that New York’s state COVID-19 vaccine czar, Larry Schwartz, is asking county officials to affirm their loyalty to the beleaguered governor, appearing to tie pandemic help to Cuomo’s unrelated woes.

“It would be up to the NGA to determine if they were to make a change on that front. It’s also up to the legislature and others in New York to determine if he still has the confidence of the people in the state,” Psaki said.

Psaki said the Cuomo-led group was put in charge of the calls to break from the approach of the Trump administration.

“One of the reasons that it’s been set up to engage directly with governors is that there were operational aspects of the way the last administration approached COVID and approached … the distribution of vaccines or approached planning and engagement with governors that wasn’t working,” Psaki said.

“They didn’t feel they had the information they needed, they didn’t know when they were getting vaccine supply. And our effort was to work much more directly in a range of means and a range of ways up and down the ranks in these states to ensure that we were addressing the local needs as they came up, so I’m not aware of any plan to shift that approach.”

Psaki said, however, it was “concerning” that Cuomo deputy Schwartz would be linking loyalty to the governor to vaccine distribution.

“We were concerned, of course, about the reports of this inappropriate behavior, but we also have a number of steps that are already in the system to ensure that the people of New York, the people of any state, are getting — the vaccines are distributed distributed fairly and equitably,” Psaki said.

The presidential spokeswoman said Biden wants a “quick” review of “troubling” sexual harassment allegations against Cuomo, but that Biden isn’t ready to demand his resignation.

Both of New York’s Democratic senators and nearly all of the state’s 19 Democrats in the House of Representatives called for Cuomo to resign last week as a seventh woman stepped forward — but Cuomo says he won’t do so.

“Like everyone who continues to read stories — new developments seem to happen every day — we find them troubling, the president finds them troubling, hard to read. And every woman who steps forward needs to be treated with dignity and respect,” Psaki said.

“The New York attorney general is pursuing, of course, an independent investigation against Gov. Cuomo and that is appropriate. And the president believes that’s appropriate, as does the vice president. The investigation needs to be both quick and thorough, consistent with how serious these allegations are.”

“I think the investigation is underway and we should see what it brings us,” Biden said as he returned from a weekend trip home to Delaware.

Last week, prominent New York Democrats in Congress and in the state legislature turned against Cuomo as harassment accusations mounted.

Fellow Democrats began to break with Cuomo last month following a stunning admission from his top aide, Melissa DeRosa — first reported by The Post — that Cuomo’s team hid data on COVID-19 nursing home deaths so that it could not “be used against us” by federal prosecutors, which could amount to a crime.